Here I sit at Sea-Tac International Airport waiting for a 6:22 AM flight to Houston where I'll be connecting to a flight this afternoon to Harlingen, TX. This is my first time to Texas and I wish that it was for a reason other than what it's for. On Sunday night, my sweet grandma passed away.


It's been a rough couple of months for my family. My mom had a heart attack in January right after the new year; followed by the anniversary of my neice's birth/death and the birthday of my grandpa who passed away two years ago. In the last few weeks my grandma had expressed how she missed my grandpa and that she was ready to go home.

Death and dying is a somewhat taboo subject in the culture of most Americans. But I was raised to know that death was just as much a part of life as is living. The first funeral I remember was when I was in the second grade. My mom's younger brother died and I can remember sitting in the pew at St. Mathew's Catholic Church next to my mom. I remember during one part of the funeral they played my Uncle Lupe's favorite song and I looked at my mom and saw her crying. To this day, I don't like to see my mom cry because I always think of that.

I saw my uncles and aunts cry, I saw my family grieve. And not only did I see them grieve, I was also a part of it. Death wasn't something that was hidden from the children in our family, and it's because of that that I'm able to process grief now as an adult. I don't agree with people who try and shelter their kids from death, almost pretending that it doesn't happen. My sister told her 5 1/2 year old son yesterday that "Bolita" died. His eyes welled up with tears and he asked if they could send her balloons, like they do every year on Lucy's birthday.

Working at The Healing Center has really driven home the point that children are as much a part of the grieving process as the rest of the family. I work with kids who are 5 years old and are grieving and processing the loss of a parent or a loved one; something I don't believe ANY child should ever have to do at that age. But with the guidance of the people around them they are learning that it's okay to show the emotion they have and to feel the things they do. Adults don't give children enough credit when it comes to their abilities to process many emotions that our culture considers "adult emotions."

I've never been to Texas, and I haven't seen a lot of my extended family on my mom's side in many years. It's sad that this is what it takes for us all to get together. I'm happy that we are all able to come together as a family to grieve, though. I remember going to Billings when my Uncle John, one of my mom's younger brothers, passed away. We were all sitting around the table at my aunt's house telling stories about him. We were laughing and crying all at the same time. Some people came to visit and were a bit mortified to find us laughing and not "grieving" in the traditional sense of the word. But our family is one where we cry but we also remember to celebrate the life of the loved one who is no longer with us. Because of those stories, my uncle will live on in my memory forever.

The other night I went to the store and bought a candle. This is one like my grandma used to have lit at all times in her house; it was surrounded by pictures of loved ones who passed away. In that tradition, I lit the candle and put a picture of my grandparents next to it. They were such a handsome couple. I'm so happy that they are together again. But that being said, I will miss you dearly, Abuelita. Dios te bendiga y descanse en paz. 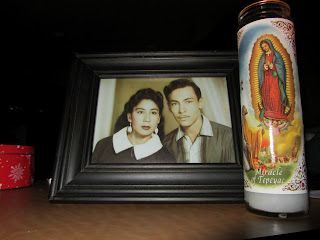 Posted by The REAL Housewife of Snohomish County at 5:24 AM