In between Mini Vacations...

I wish that I could say that today I sat on the couch the entire day, eating bon-bons and drinking wine. But that would be nothing but a big, fat lie! Today, just like any other day in the life of a housewife, was busy. My husband may be on vacation, and we may be in between mini vacations...but my job never really does stop.

This morning we slept in until about 7:30! WOOT! Ha...isn't it pathetic that that time is sleeping in to me?!? After waking up, it was right to work for me. Michael had to go and get his new glasses and then he was off to visit his parents for a bit. I, on the other hand, went and filled the car up with gas and then came home and loaded up the Rav to the brim with things to run to the city dump. One of those things was a stupid barrel compost bin that Michael purchased last year. In retrospect, I should have made him take the thing apart...but as it usually turns out...I had to attempt to dismantle it. 45 minutes later, a cut on my arm, and several new swear words later...I managed to break the thing apart.

After the trip to the dump, I came home and added a "ladder" to the chicks' side of the run. Poor Penguin was having a hard time making it up to the top roost to get back into the coop. After that it was time to rake the leaves in the front yard. Since it's been raining I didn't want to mow the yard, I figured that I'd wait until a few dry days, then rake the leaves back onto the grass and mow them up! :) Double work? Nah... LOL :)

This afternoon I left the house early and made my way to Crate & Barrel to purchase the wine glasses that I've been fawning over. Michael and I are hooked on the show "Scandal," and Olivia Pope has these AMAZING wine glasses!

Look at those gorgeous glasses! They have long stems, and are fragile...but MAN ARE THEY GORGEOUS! I told Michael that he's not allowed to touch them. I'll pour him wine, and he can use a straw to drink it. ;-) Just kidding...kind of! :)
Tonight I made my way to town for the first Parent/Child Support Group for Safe Crossings. It's the start of the 6 week group for this quarter. It feels so good to get back into the swing of working with these kids. It's so great getting to see kids that I've worked with at Camp Erin and The Healing Center. It's always nice to have a little bit of an extra connection, I think it makes us all feel a little bit more comfortable. This group is my new happy place...I know...weird right? But if you had a chance to meet these kids you'd understand what I mean. These kids have all lost someone who is very close to them, but their smiles and laughter are infectious. It's amazing how resilient children are when they are given the chance to show who they really are.
Yesterday I promised you all that I would write about my chicken coop revamp! Well...I suppose that I should get right to it!
Over the past year I've realized how much my first chicken coop, while cute, was not what I truly needed. As with most projects in a new home, you realize after time that modifications need to be made. The first modification came not long after building the coop, I built a nest box that was attached to the outside of the coop. Not long after that I added more windows and vents to the coop. It's a learning process...and it doesn't take long to realize that what you have isn't really working.

A few months ago I added onto the run. After dealing with Carnie and her reign of terror, I realized that I needed the ability to lock a hen, or hens off into different parts of the run. I left the existing coop and run in tact, for the most part...and added on a 4 foot section of the run with a door that can be raised or lowered to lock off a part of the run. This proved to be very functional while Carnie was still living here, and has even proved more beneficial since the chicks have been around!
After this addition to the run, I knew that I needed to add onto the coop, the house part of the chicken enclosure. I knew that I wanted a coop that would be able to be locked off in the middle to service both sides of the run. So I set off to figure out what I wanted, and what I thought would look good with the existing run. I already knew that I was pushing the envelope by adding onto the run...so I needed to really plead my case with Michael for remodeling the coop. So I drew up my "plans" and gave Michael my projected costs. LOL. But he knows me...and knew that the figure I gave him wasn't accurate! ;-)
﻿

I'm a very visual person. So I decided to tape out the side view of the coop on the wall of the garage. This was an extremely important part of the process because it allowed me to tweak the measurements and get an closer to accurate size and measurement of the coop.

After finalizing the size of the coop and getting the exact dimensions...I went to Home Depot... :) and then I framed out the walls. 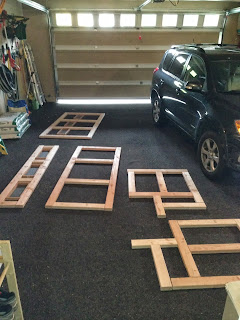 After framing them out, it was time to put them together and then start on the next part...insulation and measuring out the siding.


As a kid, I had a model farm set...and in all honesty...my coop remodel was based on the basic designs of the chicken coop that I had on that farm set! 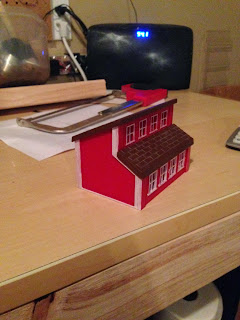 I asked my neighbor, Ed...Geri's husband, if he'd cut the siding for me on his table saw...and much to my delight...he said yes! This made my job quite a bit easier!!!  I decided to paint the panels before I cut them out to fit the sides of the coop. 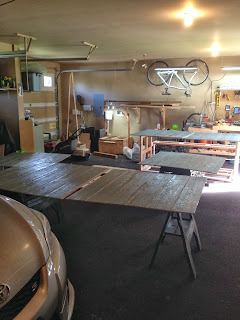 After the first coat of a paint, it was time to cut them to fit each side of the coop. After this, I was able to figure out where to cut the doors and windows in the siding. 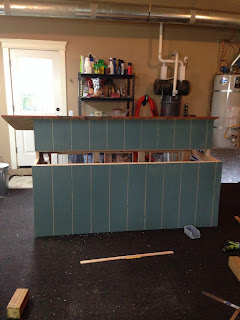 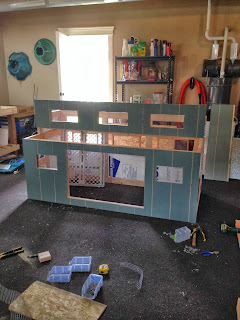 Time to get the roof ready! :) 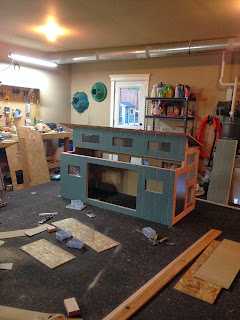 In this picture you can see the insulation that is in each wall. 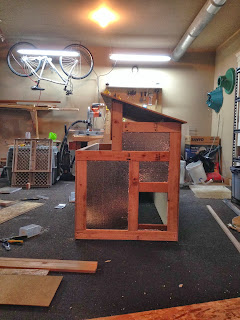 I put three windows in the back side of the coop. I really learned my lesson when it came to ventilation! When you have chickens, even in the middle of winter, you NEED ventilation! 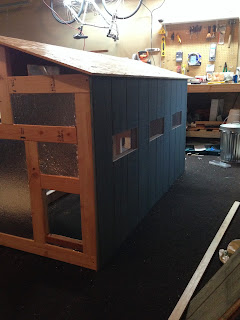 After the second coat of paint, it was time to start framing out the windows on the front and back. :) 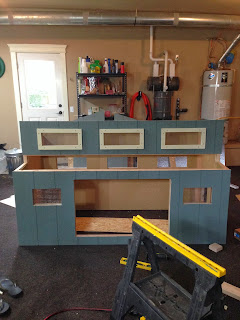 I was under a bit of a time crunch when it came to this coop remodel. I had a few days of sunshine before we went on vacation, and I wanted to make sure that I had the major part of the remodel done before we left. So a few days before vacation I decided it would be the day that I demolished the old coop and flower bed and put up the new coop! 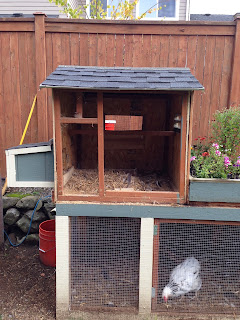 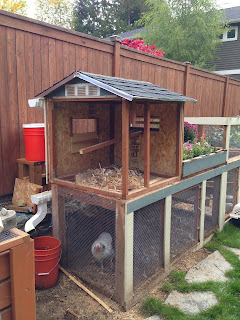 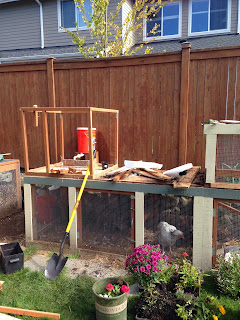 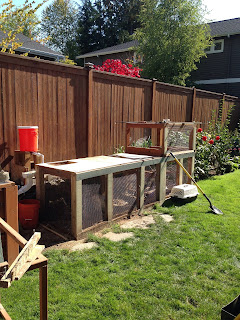 I literally built this coop wall by wall. I did this so I could have each wall full built, and could assemble the coop outside on top of the run in the least amount of time. Each wall was full equipped with the studs, windows, siding, insulation, interior window coverings, and interior walls. 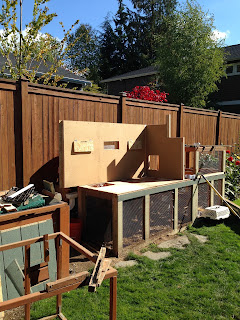 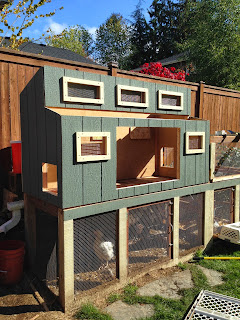 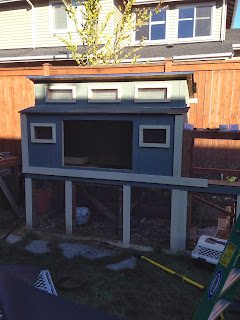 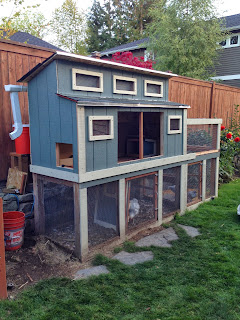 At the end of day one, this is what I had. Not bad for a day's work, right? I won't lie, I was disappointed that I didn't have the front doors on...let alone made! So Chynna and Wendy had to sleep below that night. :( 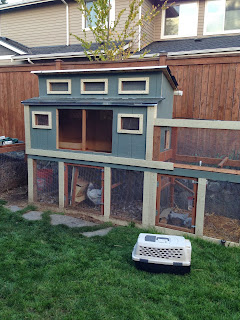 The following day I managed to make and install the front doors of the coop. :) And it was ready to fill with straw and get ready for the chicks and hens to live in! 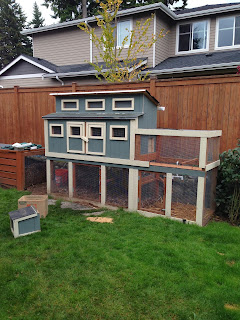 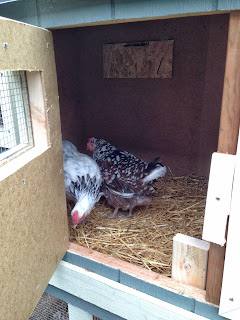 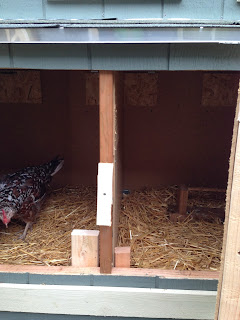 The central divider is made of pegboard. This will be able to be unscrewed when the chicks are introduced into the flock. :) 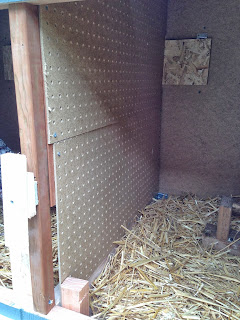 All of the windows on the top and the back side of the coop have inside covers that can be held open or secured shut, depending on the weather. 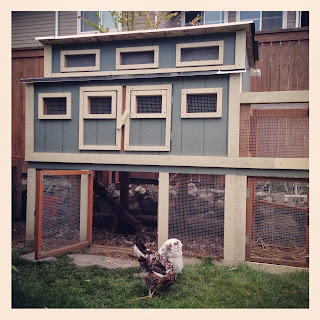 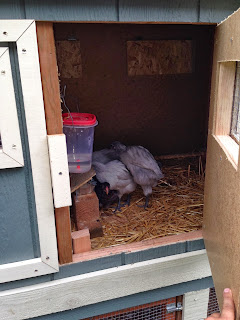 Right before we left on vacation I installed the door from the coop into the new part of the run for the chicks to go in and out of the coop. 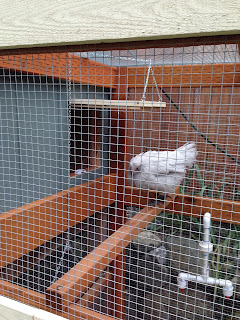 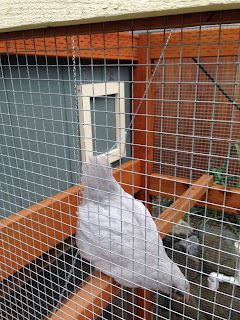 For the most part, the coop is finished. :) Not bad for a "simple" remodel...right? ;-) After all of this...what I have left is the nest box. What I had on the other coop wasn't working. The rain managed to make its way into the nest box and make the wood all moldy, so I need to redesign and rework it to make sure that it doesn't happen again. But the coop and runs are functional right now. Today I added the ladder to the chicks' side of the run to aid in getting into the coop. Other than that...everything is working out fantastically! 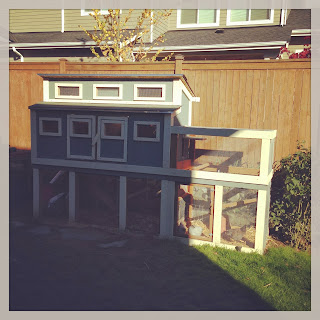 I did manage to build a hopper style feeder for the chicks. This is extremely helpful because they are going through so much food right now. And I also did it because I didn't want Geri to have to fuss with too much while we are on vacation! :) 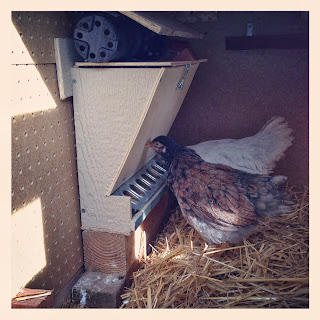 So what do you think? Do you approve of my coop remodel? :) If not...what do you think I could have done differently? Now, before you say anything...realize that I need to add another coat of paint to the trim, the screws need to be painted over! :) And of course I need to add the nest box on...but all in all...this is the remodel that I've been needing! And I truly do hope that you like it!!!
Well I should really get into bed...it's almost midnight and we leave for vacation tomorrow morning. Ahh...you thought I was going to tell you where we were going! Well...you'll have to tune in tomorrow to find out where we are going! :)
Until next time...Keep Cooking!
﻿
Posted by The REAL Housewife of Snohomish County at 11:53 PM