The House on Haunted Hill!

So, Michael and I are in the slow process of finding a new home. We have been searching (or I have rather) endlessly online and watching every show on TV about home buying and fixing them up. Yesterday we toured two homes, they were on separate ends of Mukilteo. The first one was nice, the second was a house straight out of the 90's and you could totally tell. Today however, we took a home tour that we will NEVER forget!

I saw this posting several weeks ago and was intrigued by it. A 5 bedroom house on 1/3 of an acre with a sauna, hot tub and even a sport court below. Here is the listing:


House in Mukilteo
Today we decided to add this to our list of homes to tour, this was going to be the first stop of four. Our appointment time was for 6:30 PM, not ideal to see the natural lighting of a house and all that fun stuff. But we met our agent there and from the minute we stepped onto the front porch the hair on the back of my neck stood up. We walked in and the foyer is quite grand and nice. But the house went downhill QUICKLY after that. It was a hodge podge of 90's and 60's decor in there. The kitchen was quite out-dated, and that is one room that is important to me!
As we began walking into other rooms my discomfort became quite apparent. It seemed like every time you turned a corner there was a hallway and that the house just kept going on for miles. I opened this door and walked through a little breezeway into a small area that looked like it was once a child's playroom. In the one corner was a tiny cut out that led into another small room with a ladder that went up another floor into what I assumed was another room. This was so creepy to me. I was in this room, and Mike did NOT want to crawl in there!
As we continued walking around the house the upstairs was just a mess! Most of the lights didn't work so we had to use the agent's flashlight. To my delight, and horror, I walked into the master bedroom and turned on a light and there to the right of the door...in the MAIN part of the bedroom was a tub set in the floor! The worst part was the light above it was RED! Please see the creepy @ss picture: 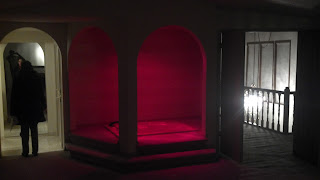 The only mirror in the entire house is the one that you see in this picture, otherwise all the other mirrors had been removed. This house started feeling more and more like either a porn house or a place that terrible things happened in the past. Mike wanted to leave, he didn't want to see any more of the house. I on the other hand had this strange almost morbid fascination with the house and couldn't stop walking through rooms. I was sure that at some point we would open up a door and find a dead body.
In one of the rooms upstairs the walls were painted and then they had painted phrases and words onto them. One of the sayings was "Rest in Peace Scott." As if this wasn't enough, in another room (the small one on the other side of that breezeway) there was a chalkboard with things written on it and one of them was "Someone please help this house!" The house just kept sending out these awful vibes to all of us.
But I couldn't stop! There was still the basement to see, so down I went, feeling my way and searching for light switches. There was another bedroom or two down there, plus the sauna and hot tub. And the lid to the hot tub was taped shut, I'm almost certain that it wasn't a hot tub, but rather another portal to hell! In the closet by the hot tub the door had been removed to the crawlspace under the house...which only added to the creepiness of this entire viewing!
We made our way back upstairs, the hair on my neck still standing; and Mike noticed that there was an old radio/intercom in the wall and he started fiddling with the knobs as if trying to turn it on. He quickly stopped, and told me later that he realized..."I do NOT want this thing to turn on!!! Can you imagine what voice would have come out of there!!!" We made our way to the front door and as we closed it, Mike said, "oh no, there's still a light on." And our agent said, "I'm not going back in there! It'll stay that way!" You know it's bad when the agent won't even go there!
This was NOT the way to start our tours. Mike couldn't shake these bad feelings and swore that this house WILL give him nightmares! And I am right on that with him. All night we've been talking about this house and can't seem to shake it. We stopped at QFC to get some wine ( hehehehe) and I also told him not to laugh at me, but I bought a candle with the Virgin Mary on it and said I was going to burn it. I also sprinkled Hawaiian Sea Salt outside EVERY exterior door, including the garage door. I'm not taking any chances on something following us home from this awful house!
I called my friend Jaime on the way home and was telling her about it and she couldn't believe it and told me I was making it up! But that is the thing, this house was SO bad that we thought we were getting punked
The other three houses were rather night, dated, but nice. We are still on the hunt, but we now know that The House on Haunted Hill is NOT for us! I would have taken more pictures of the house but I was just in shock, I couldn't believe this was for real. The chalkboard asking someone to help the house, and the RIP Scott, those were enough to keep me away for good! I won't even go to that neighborhood again, ever. Blah...I now have the heebie jeebies!!!!﻿
Posted by The REAL Housewife of Snohomish County at 9:47 PM