No rest for the weary...or sick for that matter....

Michael and I made our trip to Arizona to see my mother. As a big ol' momma's boy...it was very important for me to get down there to see her and make sure she was really okay. And I'm incredibly fortunate to have a husband who recognizes how important family is to me and will do anything to help me and my family out when needed.


It was a whirlwind of a trip, which most of our trips are. We dropped the boys off at The Dog Spot on Friday and Cooper couldn't wait to get away from us and in with his friends. It's always nice to know that the dogs are happy to be there, it makes it easier for us knowing they love where they are at. Our flight and drive from Las Vegas to Parker was pretty uneventful. And as soon as I saw my mom on Saturday, I felt better immediately. She's a bit sore from where they put the catheter up her leg to do the angioplasty, but other than that she's doing pretty good.

We had a good weekend with them and Mom, of course, treated our visit more like a vacation for us than what it actually was. We thought we'd go down there to take care of her, but she was worried that Mike hadn't ever been there so she wanted to make sure he saw everything. On Sunday, Mike and I did take a drive through Parker and up the California side of the Colorado River and stopped off at the Parker Dam, which is the deepest dam in the world. My mom lives right on the river and there are some spectacular views to be had! 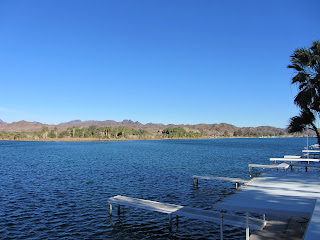 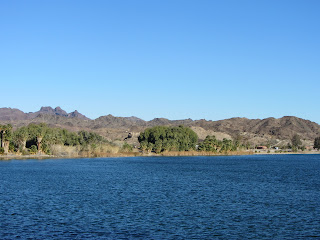 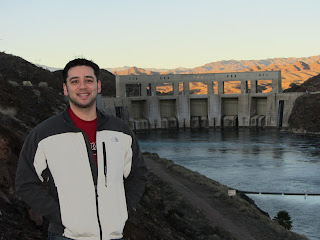 On Monday we woke up and went to work with Mom at around 8 AM. We sat in on the morning show with my mom and stepdad. And then after the show was done my mom had Mike and I cut a few ads and do some liners. One of the ones that cracked me up was "Mornings with Keith and Juanita...better than a heart attack........(clear)." No matter what it is that's going on, they figure out how to make light of it and use it for the radio station. Mike was a bit nervous doing the ads since he's never done anything for radio before. But he got the hang of it and even did a "Top 10 Things NOT to do when you are having a heart attack." He made us all laugh when we listed to the "PSA in Juanita's Honor." :)

We left back for Las Vegas on Monday night since we were flying out early on Tuesday morning. The drive back was pretty decent. The whole trip I was reminded why I don't live in Arizona anymore. IT IS TOO DRY! My skin felt like it was stretched thin across my body and my sinuses decided they were going to freak out because of the dust and the dry air. I'm a mess, let me tell you! We ended up walking around the strip that night and settled on what we thought was a cute "cafe" in The Venetian. Well we soon found out we went in the WRONG door and were in a rather expensive place. The cheapest bottle of wine was 55 dollars and they went all the way up to 7,000 dollars. So we figured, we're only in Vegas once so we ordered the 7K dollar bottle. Just kidding. We ordered the cheapest bottle and paid the 150 dollar tab. This whole thing was very reminiscent of our 80 dollar breakfast in London! :) But it was a pretty night in Vegas and the moon was really full and cool! 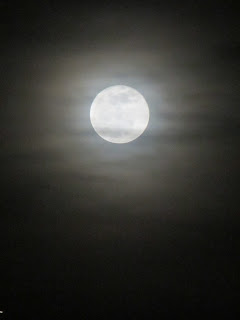 We flew back to Seattle on Tuesday morning and it was quite a relief to step out of Sea-Tac and feel the moisture in the air. We drove directly to The Dog Spot to get our boys. When Puck came out from the back he ran up to the gate and was shaking and squealing until I picked him up! Even then he continued to squeal and shake while his tail was wagging over a hundred miles an hour! He was super excited. And when Cooper came out he ran up to Mike and did his "Jump up, Kick Mike in the Balls, Lick Mike's face." His typical greeting, which I find rather amusing! We got home and all crawled onto the couch and just rested before Mike went to work.

The last few days I've been battling a rather nasty sinus infection and I feel a bit run down. BUT, that being said, the job of a housewife doesn't ever pause. So I made the braised beef brisket for dinner and took it to Mike at work. I even recorded a video for it, hopefully I don't sound too nasally. I did make it to the doctor today to make sure things weren't getting out of control, but I'm slowly but surely on the mend.

So, to recap, we had a whirlwind of a trip to see my Mother. My body and sinuses decided to revolt. The dogs were just as happy to see us as they were to leave us. And my job is never really done. And in all honesty...I love it all. I'm so relieved that my Mom is doing better and I hope that she relaxes for a bit and allows her body to heal. But I know her, and she's probably itching to get back to running and doing the million things a day she normally does.
Posted by The REAL Housewife of Snohomish County at 8:18 PM