I'm not sure what the temperatures are like in your neck of the woods...but I do know that here in Snohomish...they've been hanging out in the 80s! And if you know anything about me...you know that the good Lord built me for colder weather.

These past couple of months have been quite unusual for the Pacific Northwest. We normally have a few days in the summer that hit the high 80s to low 90s...but this summer it seems like Mother Nature has her panties in a twist and has decided that she's been way too nice to us. So she ups the thermostat. And then after a few weeks of heat she feels bad and decides to give us a month's worth of rain in 48 hours.

During this time I've tried to find ways for not only me to stay cool, but for my chickens to as well. A while back I found a recipe for a watermelon cucumber margarita. Sounds good, doesn't it? :) Let me tell you...it IS! The thing about this drink is that you strain the pulp out of it...and I gave that to the chickens as a treat! A great thing for both parties! Well maybe I got the better end of the stick because my treat had tequila in it. ;-)

A few weeks ago we had Michael's parents over for dinner on the patio and I was trying to figure out a nice, cool dessert that would also be light and refreshing on the warm day. I thought about the watermelon cucumber combination and started to look up all sorts of recipes for sorbets and granitas...but the sorbet recipes said that you needed an ice cream maker. Forget that noise! I don't have room in my cabinets for the things I already have...I sure as heck ain't gonna buy another appliance I'll use once in a blue moon.

So the fact that sorbets were out of the question I looked at making a granita. Now let me tell you...it was looking like it was going to be a lot more work than I really wanted to do. You need to let the mixture partially freeze then get in there with a fork and mix it up...and keep doing that step over and over. No Thank You. So I wondered if there was a way I could combine the two things into one and get a marvelous end result. And guess what...I did it! And thus...the Sorbnita was born. What? Don't like Sorbnita? How about Granet? ;-) I'll stick with Sorbnita!

Without further adieux...here's the recipe. 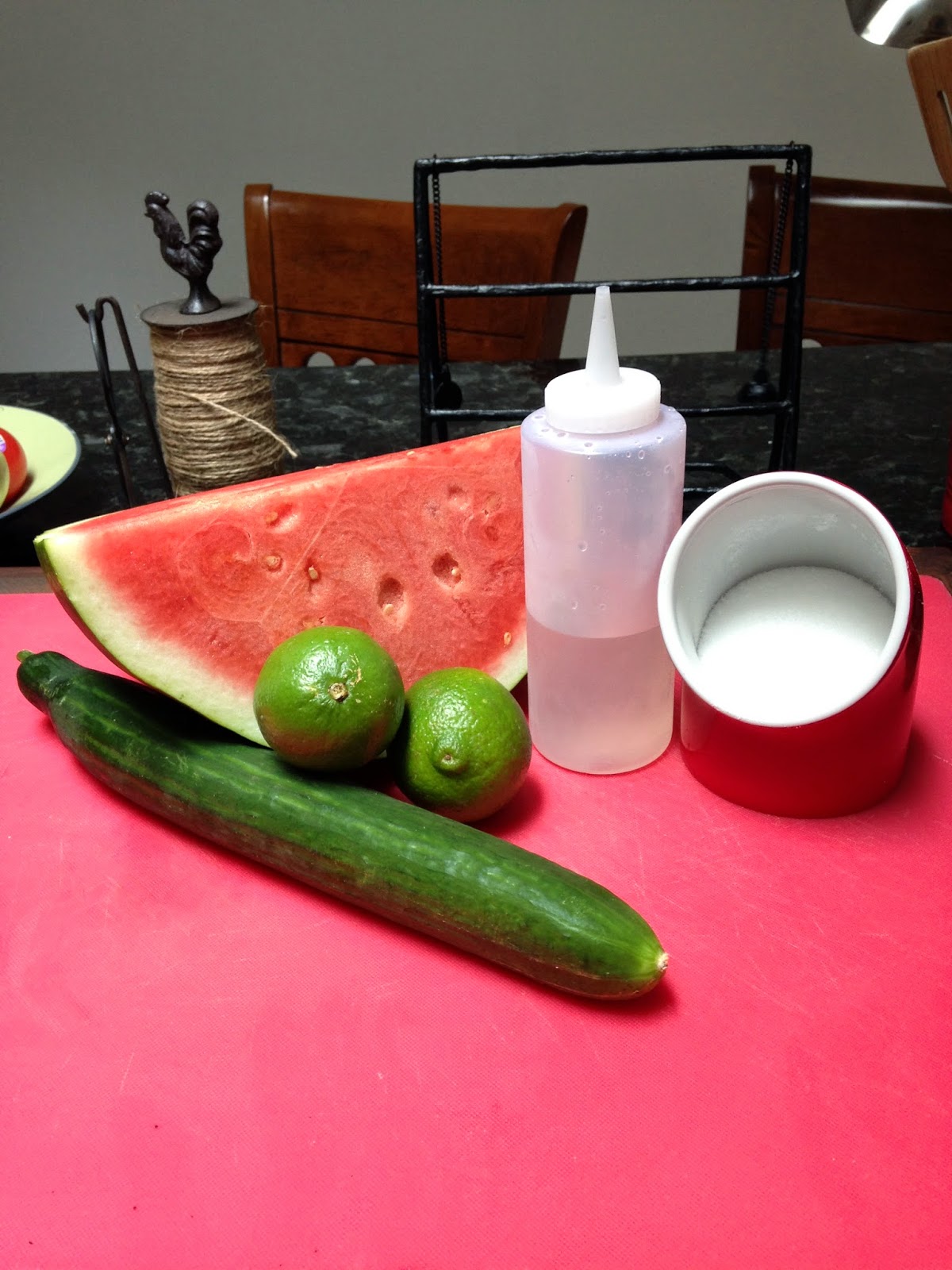 First things first you need to make a simple syrup. Let me tell you...the name is 100% accurate. It's simple, I promise. I like to make a little more than I need because you can keep it in the fridge and use it for sweetening tea or anything else. Or...a cocktail! ;-)


Combine 2 cups of sugar and 2 cups of water in a medium sauce pan and bring to a boil. 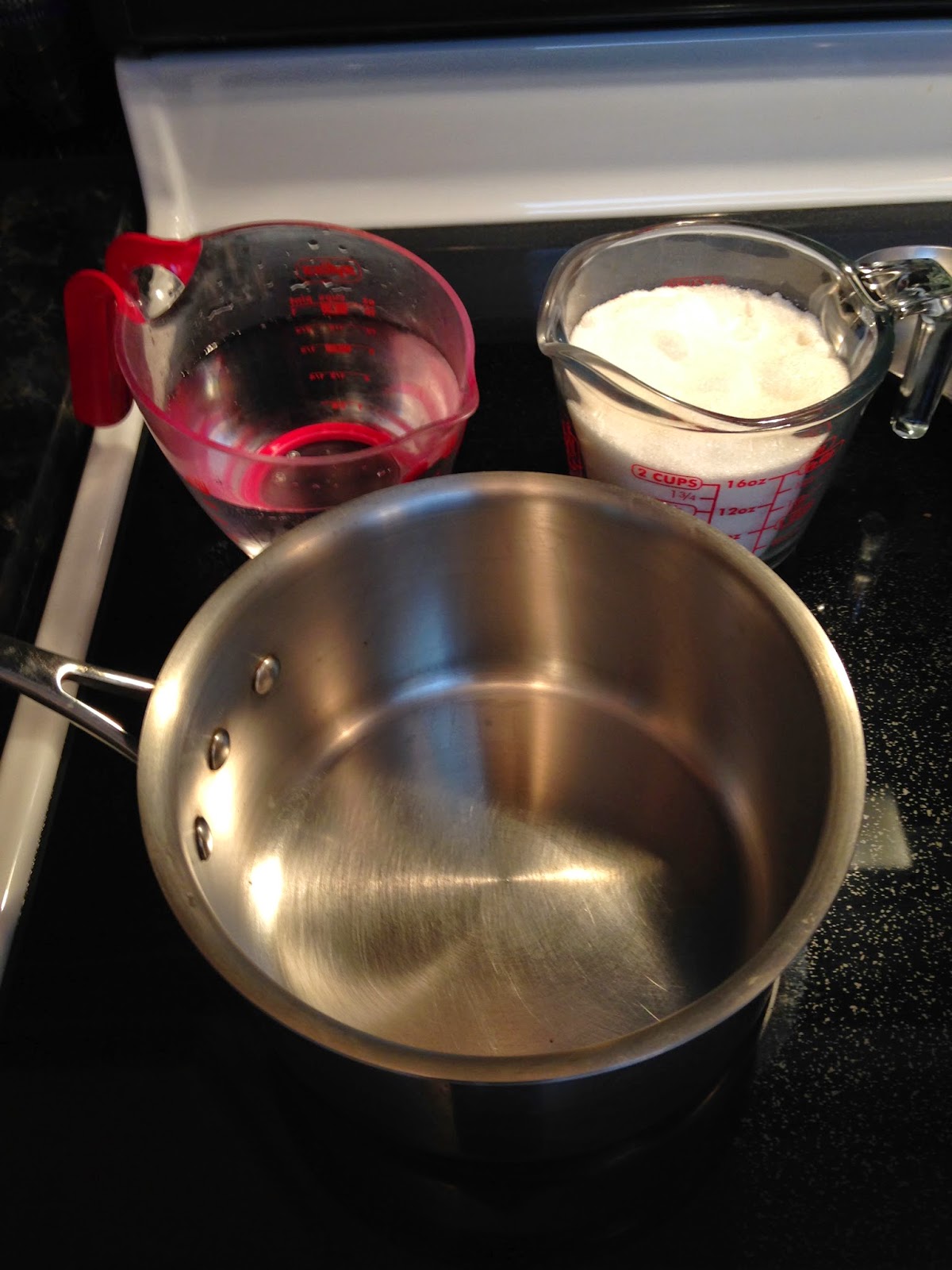 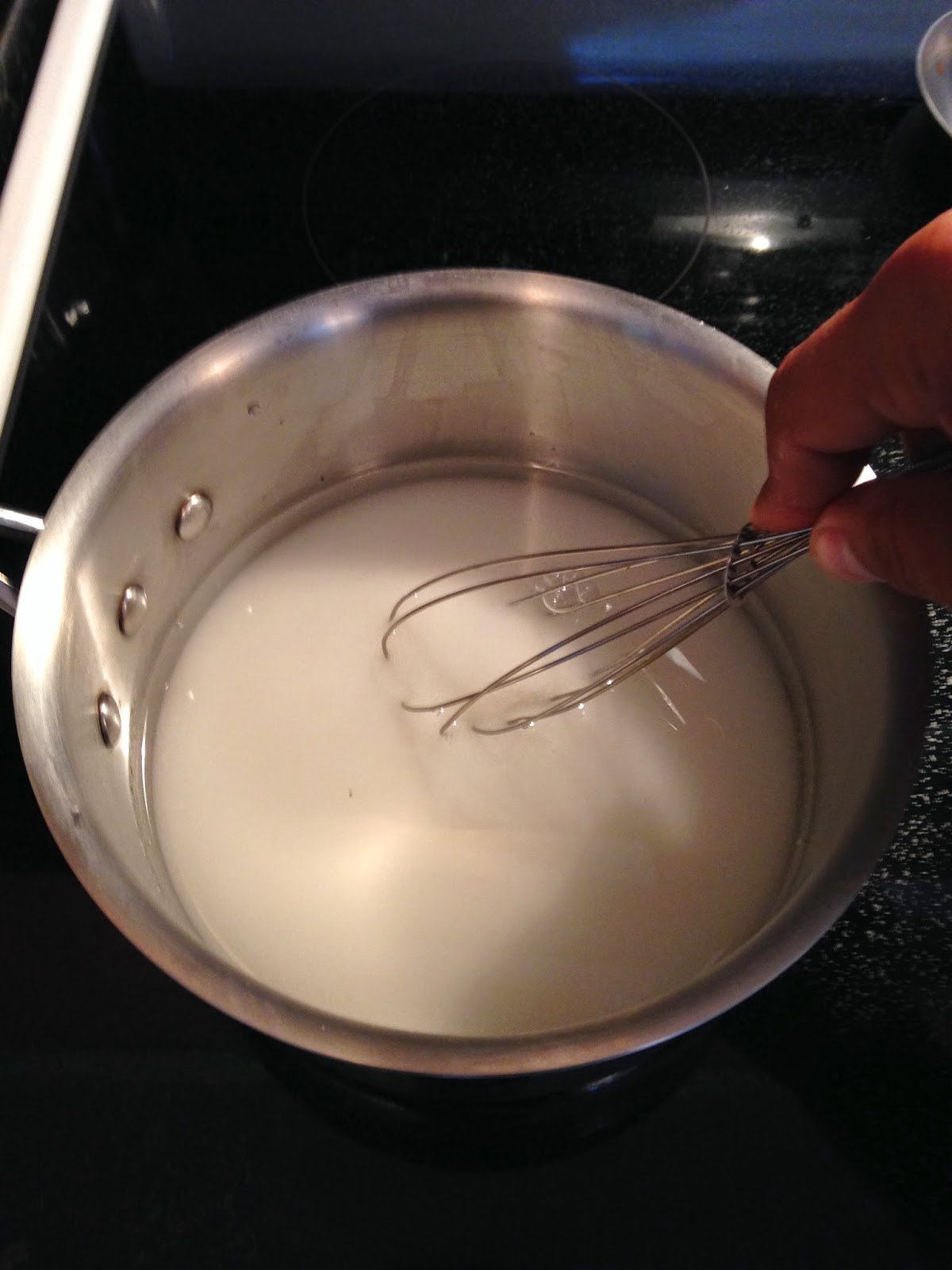 Once the mixture has come to a boil, remove from the heat and let it cool. You can put it in new bowl to cool, that way you don't have the residual heat from the pan. 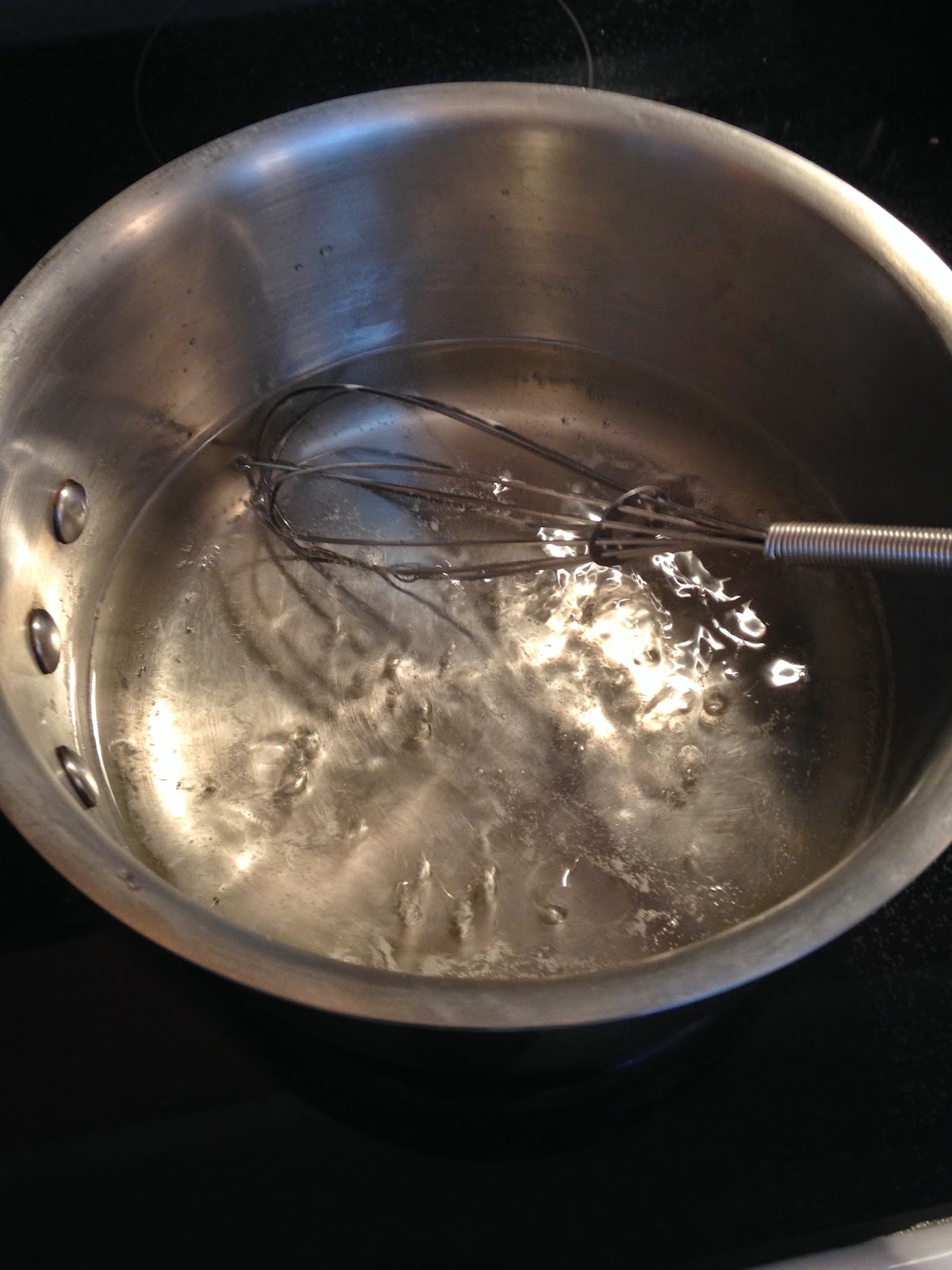 While the simple syrup is cooling, start on your other ingredients.

Cube 4 cups of watermelon. A little more won't hurt...so it doesn't have to be EXACTLY four cups. :) 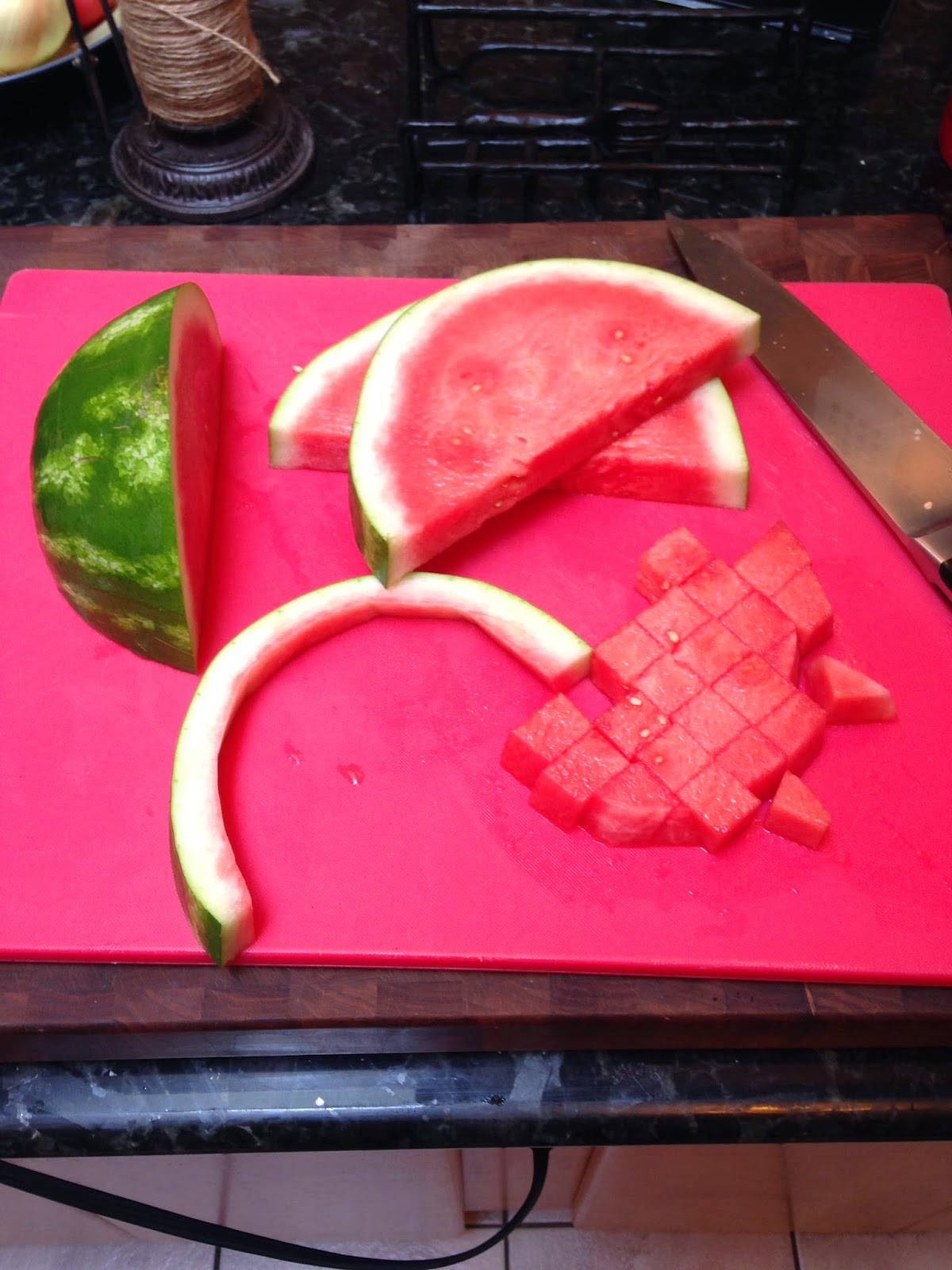 Peel and cube 1/2 to 3/4 of the English Hot House Cucumber. (Depending on the size) 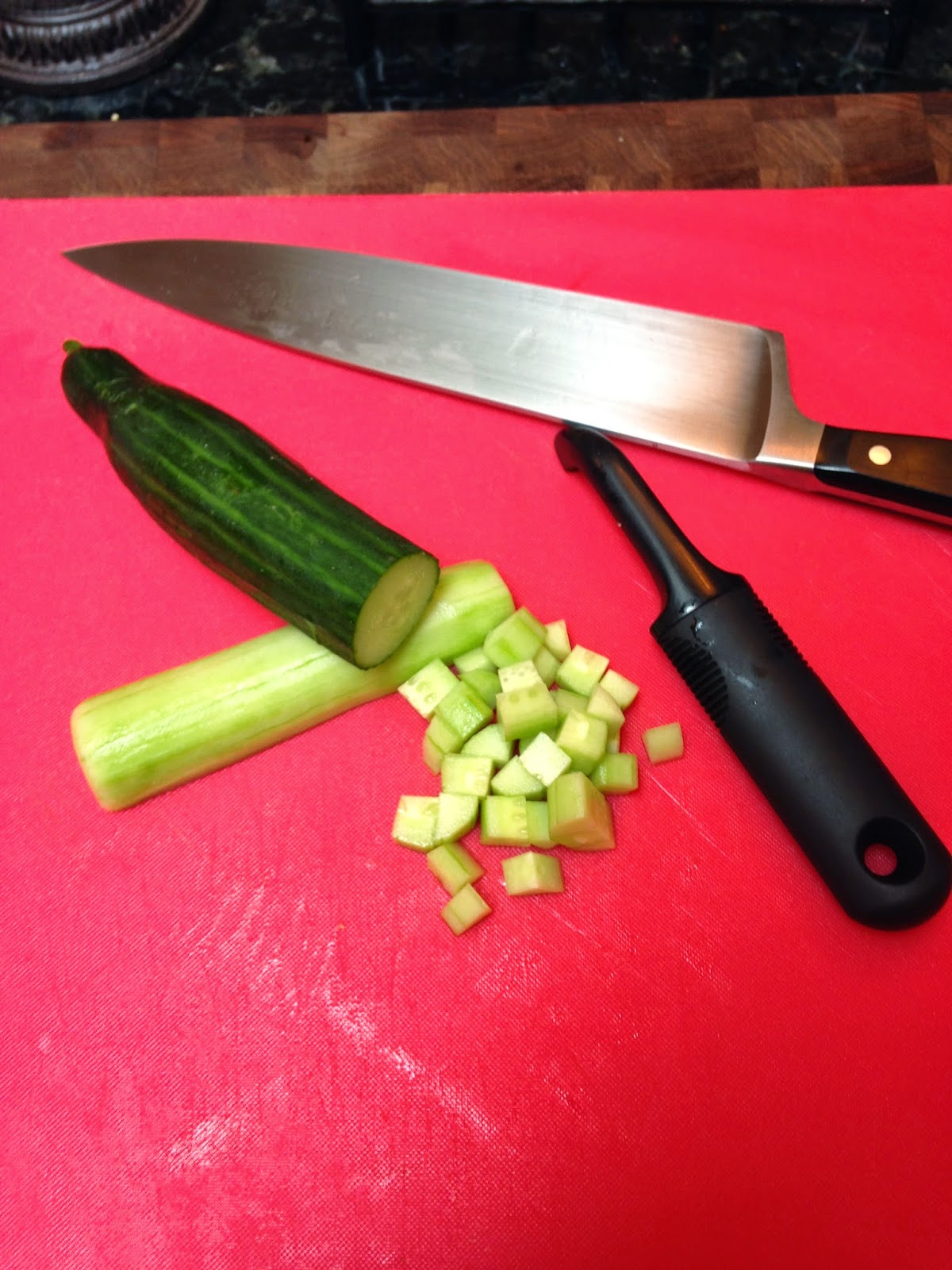 ***Housewife Tip for Chicken Owners*** I put the watermelon rinds in the freezer and give them to the chickens on hot days as a treat! And I just toss the cucumber peels into the run for them to gobble up!

Put the watermelon and cucumber into a food processor. 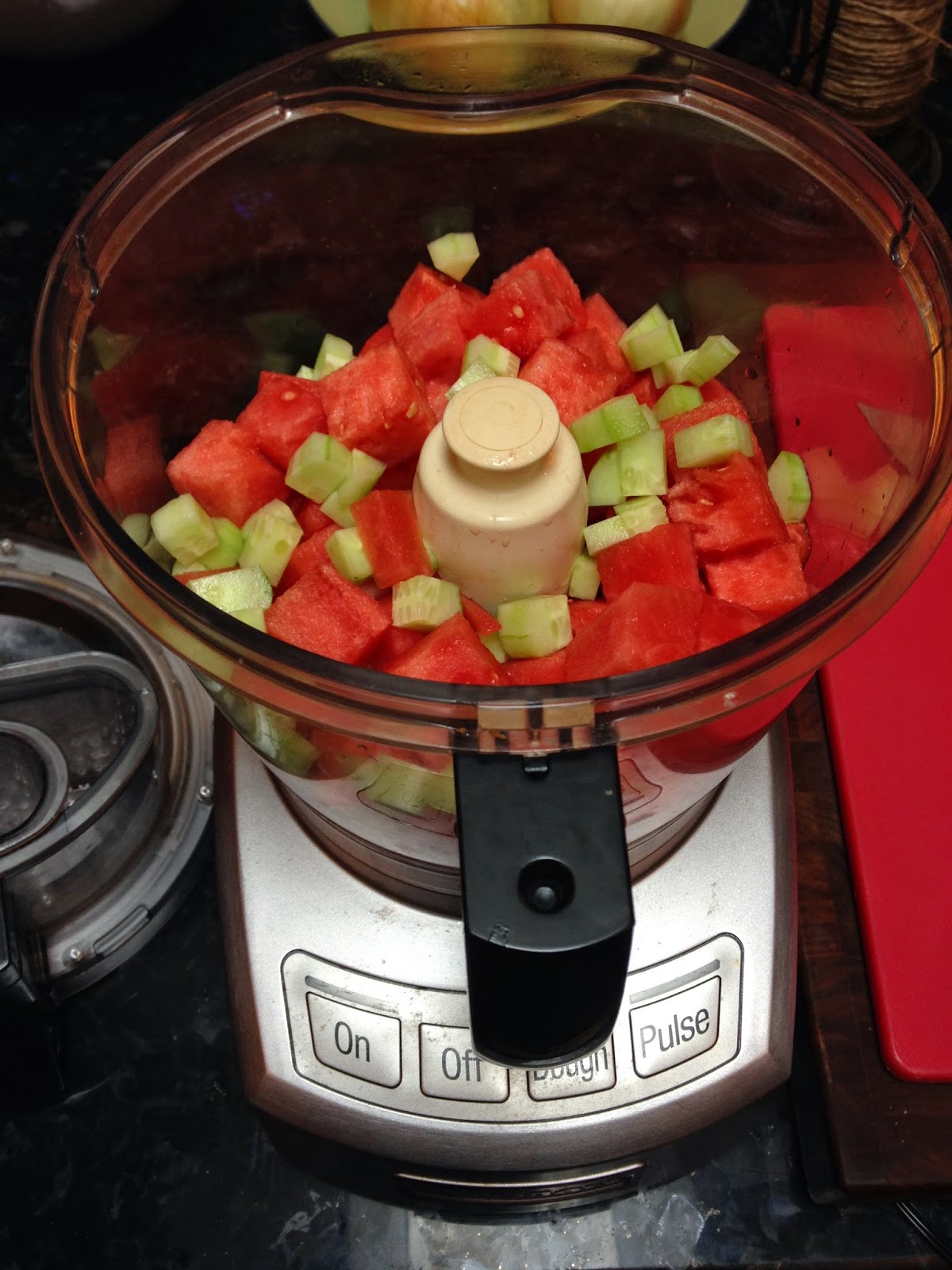 Puree the mixture...it should look like this...a wonderfully pulpy mixture. 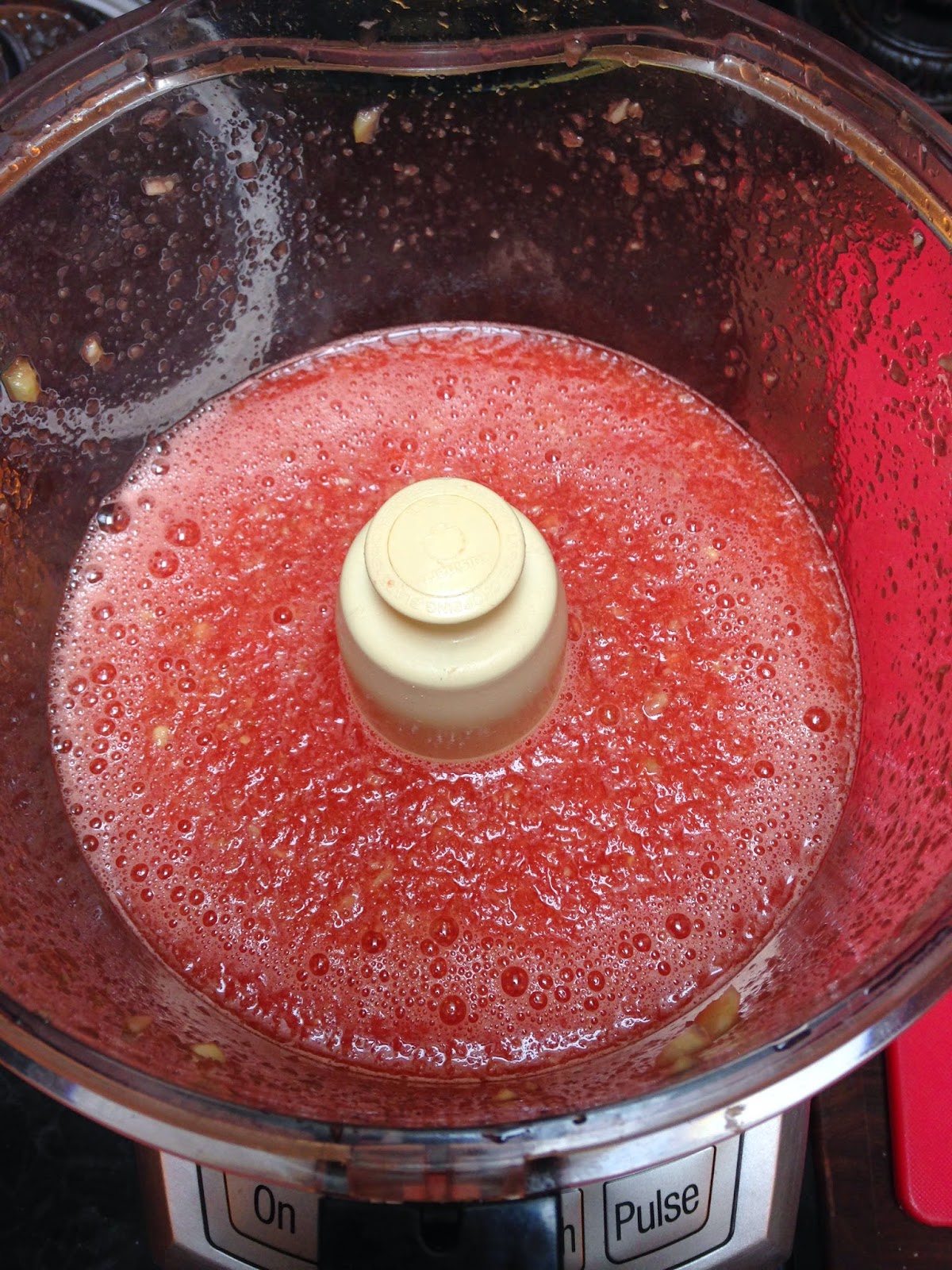 Pour the mixture through a fine mesh strainer, into a bowl. 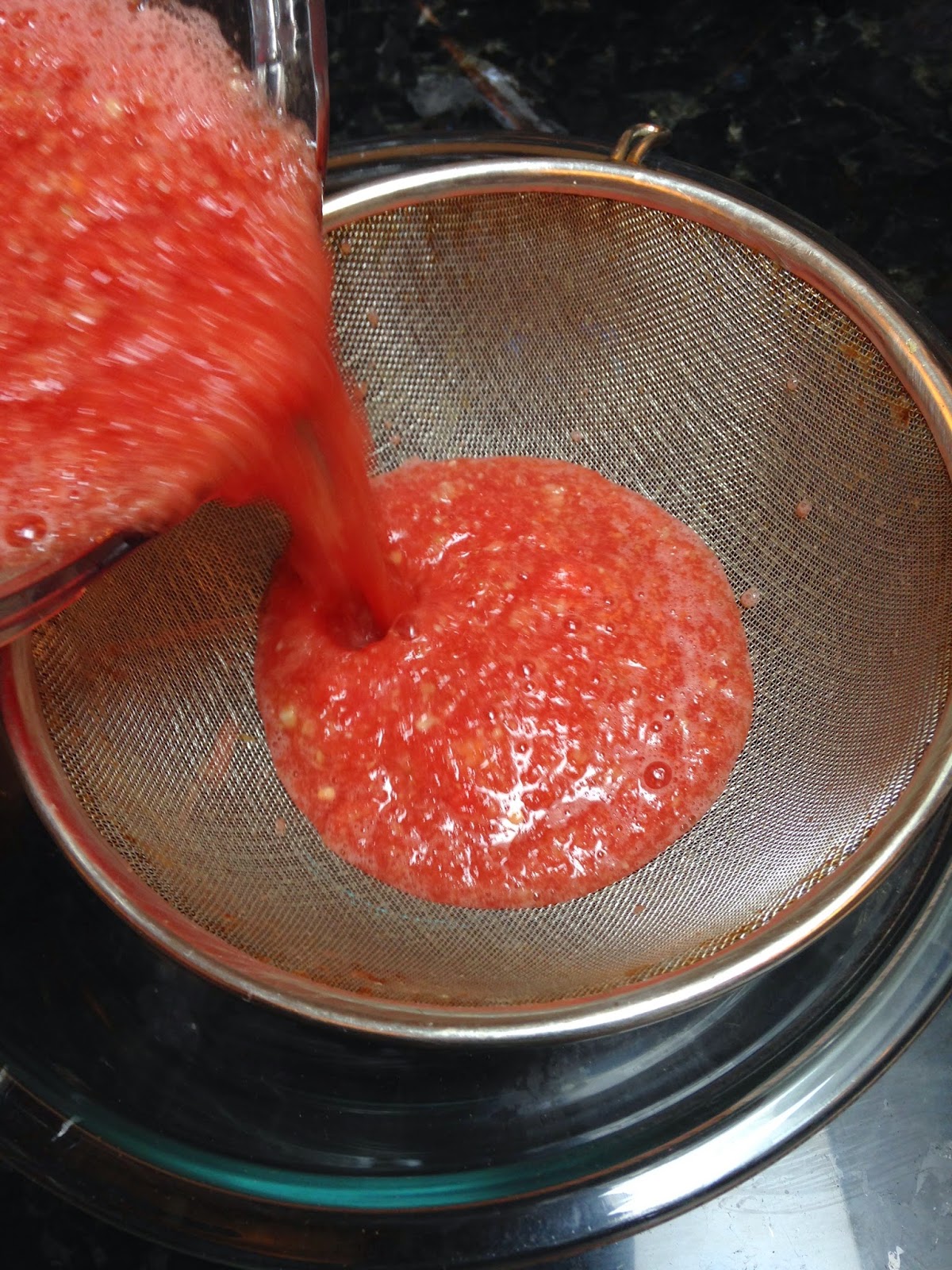 Using a rubber spatula, help it along by pushing it through. 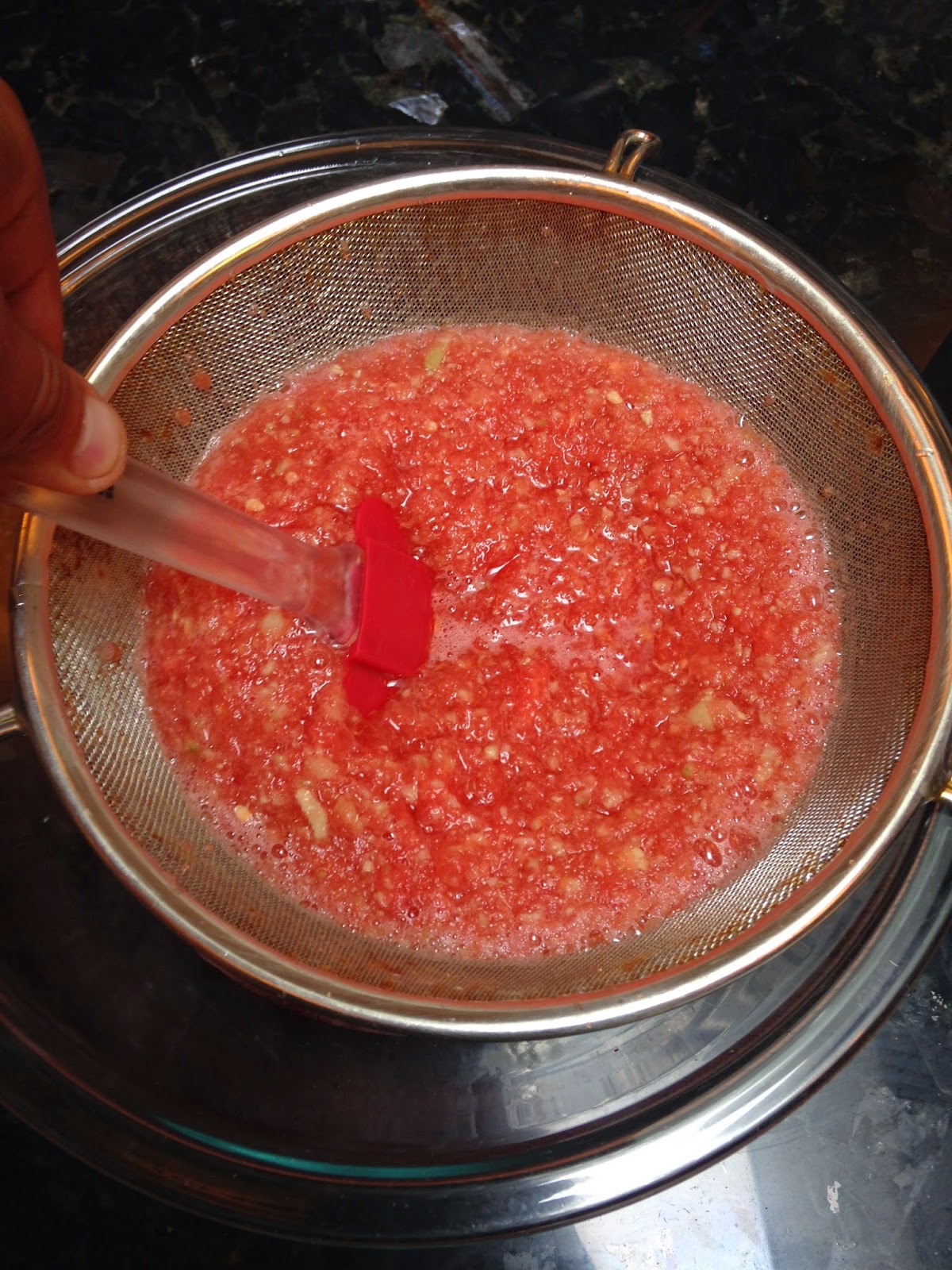 In the strainer you should have all the thick pulp, while all the juice is in the bowl. 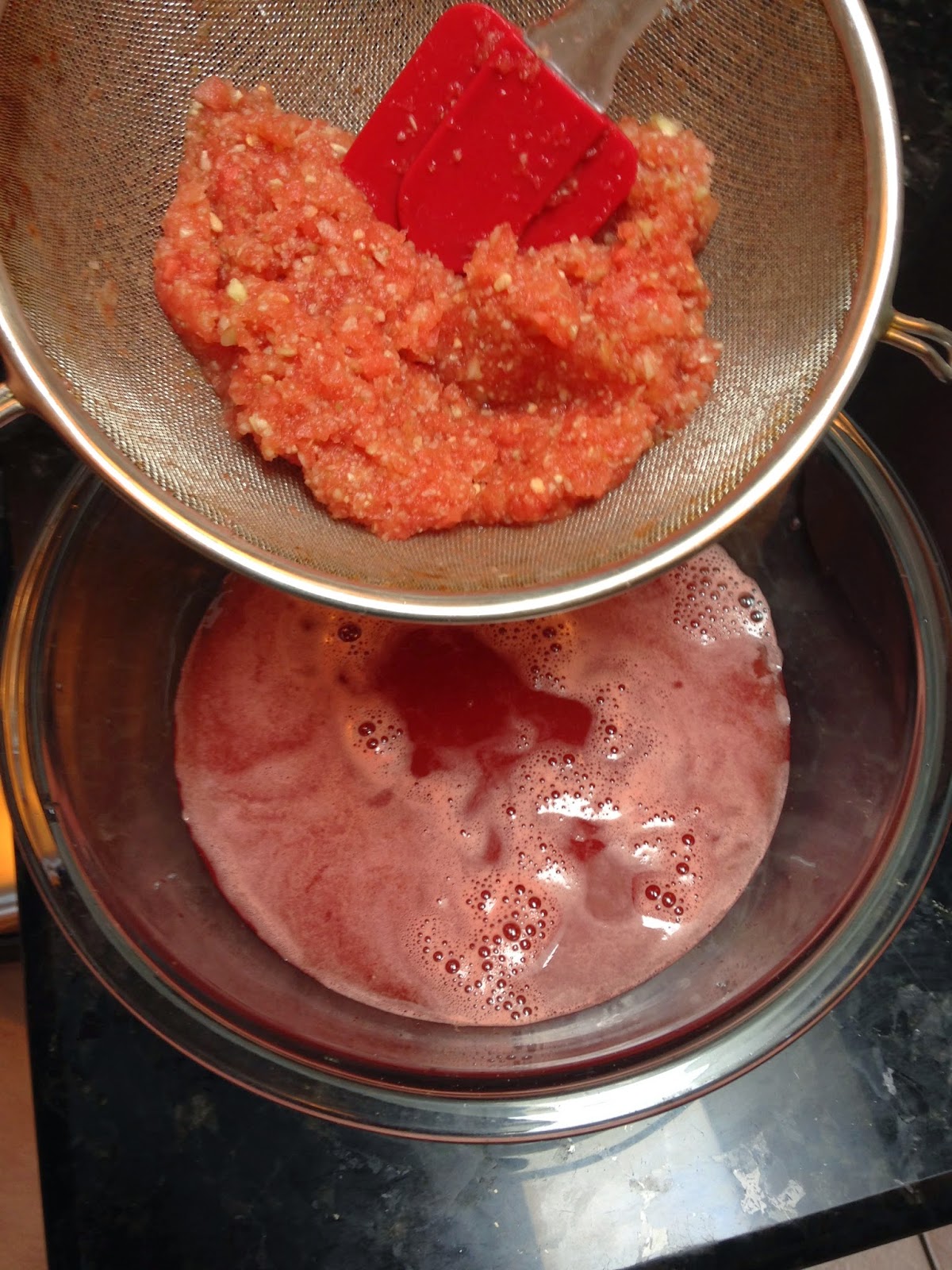 Now if you are a chicken keeper, or know someone with chickens you can do what I do. I line a bowl with plastic wrap and the put the pulp in there...freeze it...and it's a hot day treat for the chickens as well! This way nothing goes to waste! 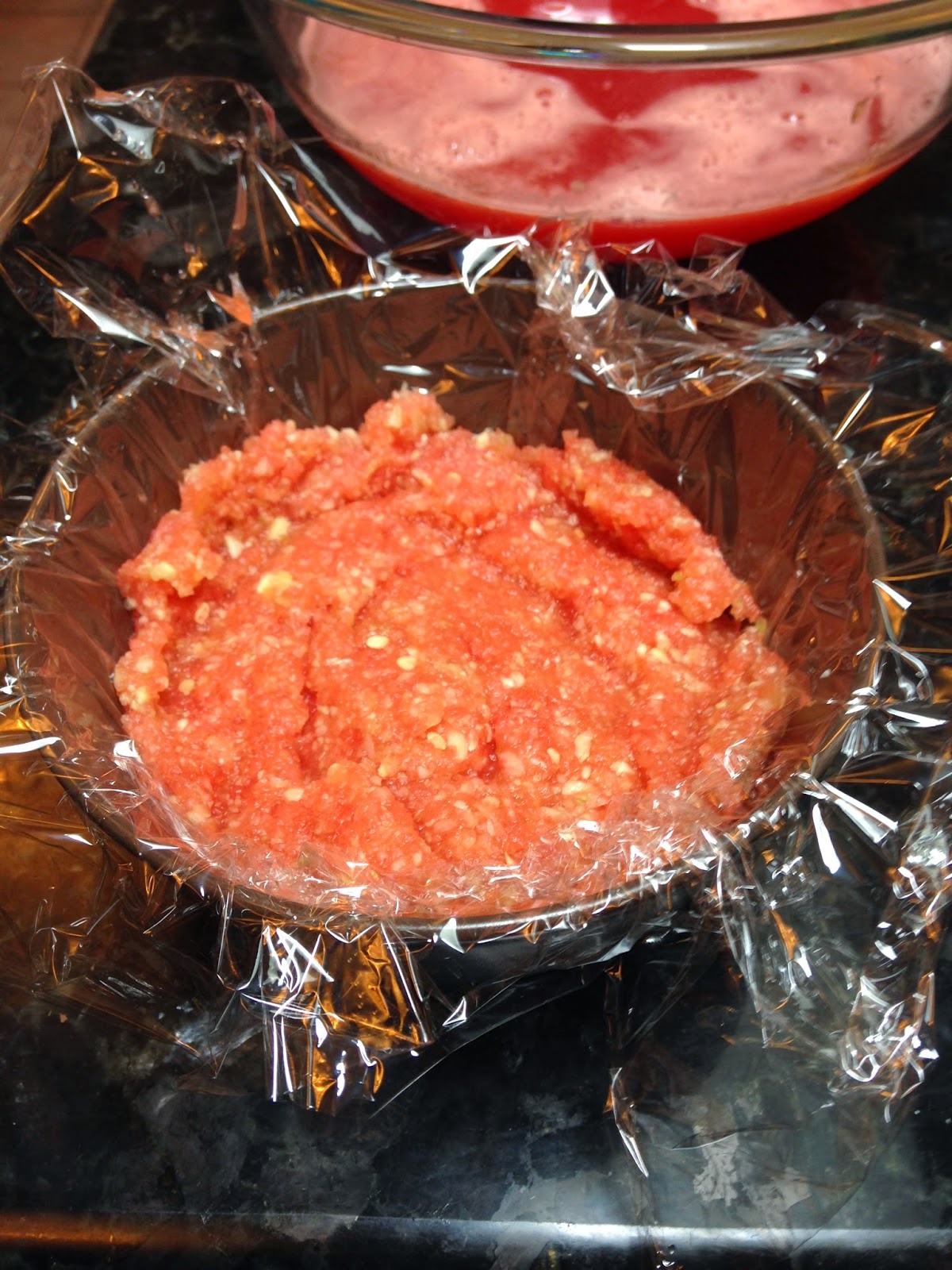 Back to the bowl of watermelon and cucumber goodness! 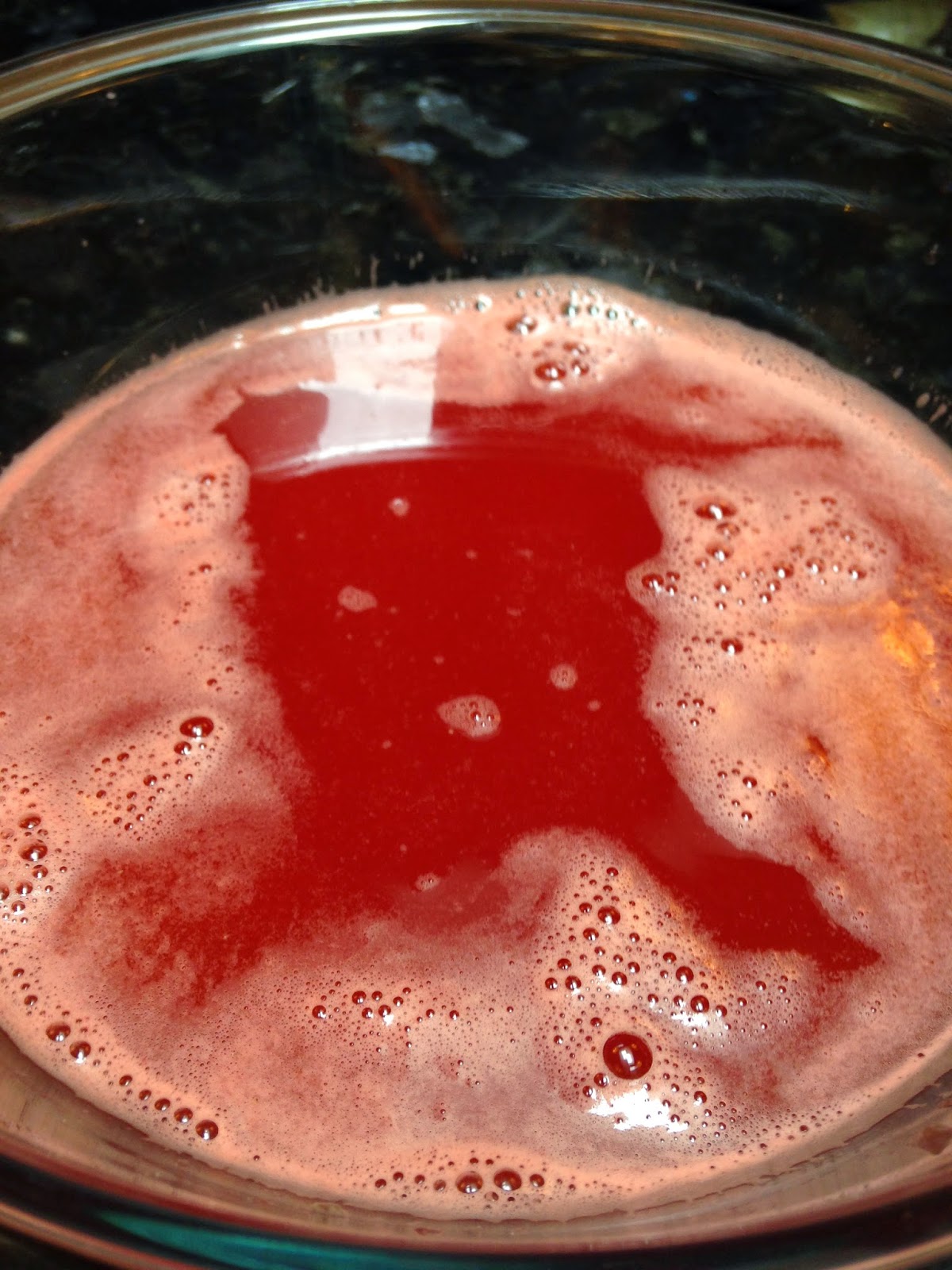 I like to keep my simple syrup in a squeeze bottle in the fridge...makes it easy to add to beverages or anything else. :)

Add simple syrup to the mixture. Now I don't want to give you an exact measurement because it will vary depending on the sweetness of the watermelon as well as how sweet you like things. I added about 3/4 of a cup of simple syrup. I like to err on the side of not enough because you can always add more...but you can't take it away. 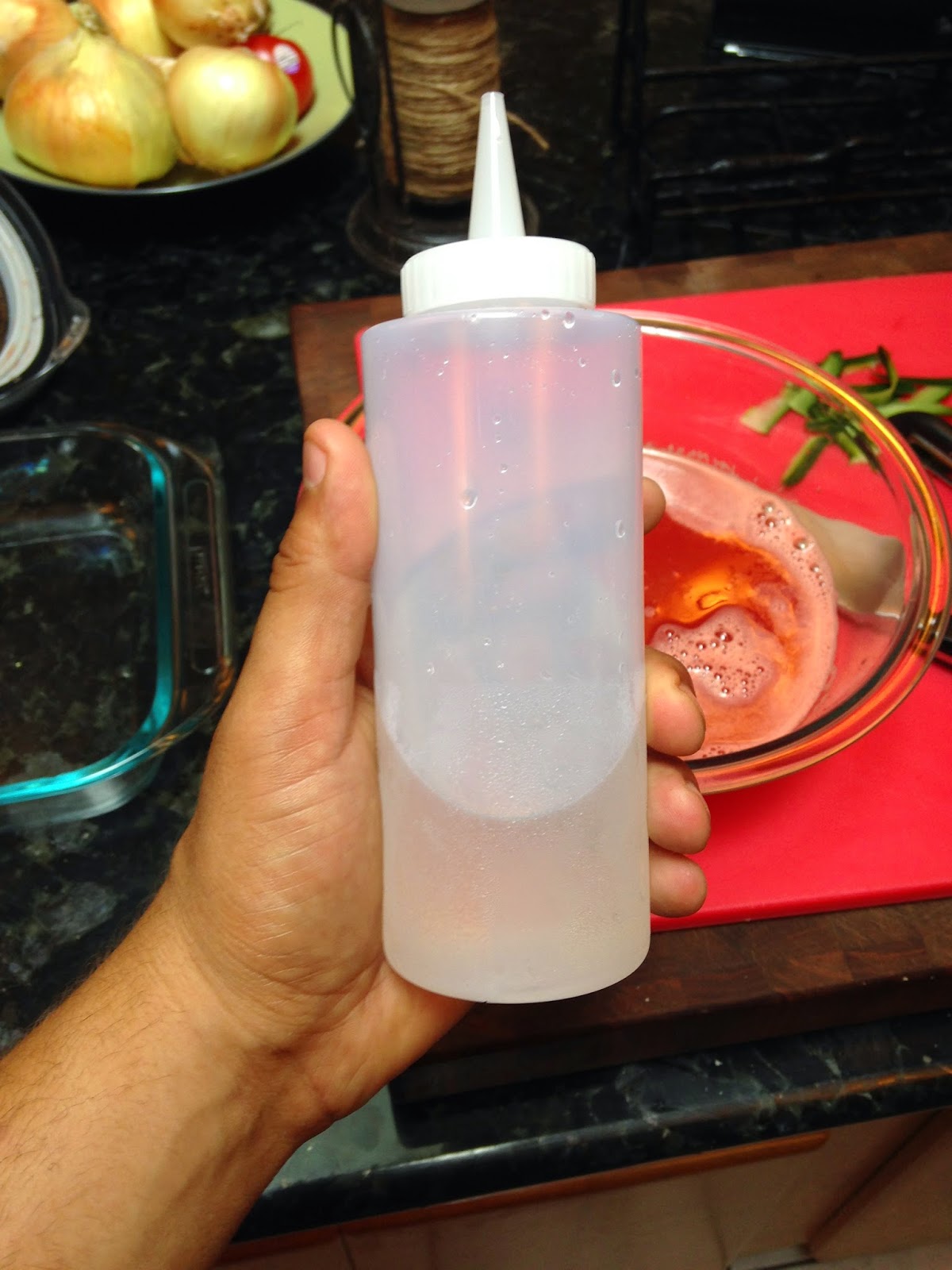 To the watermelon cucumber mixture add the juice of 1 lime. 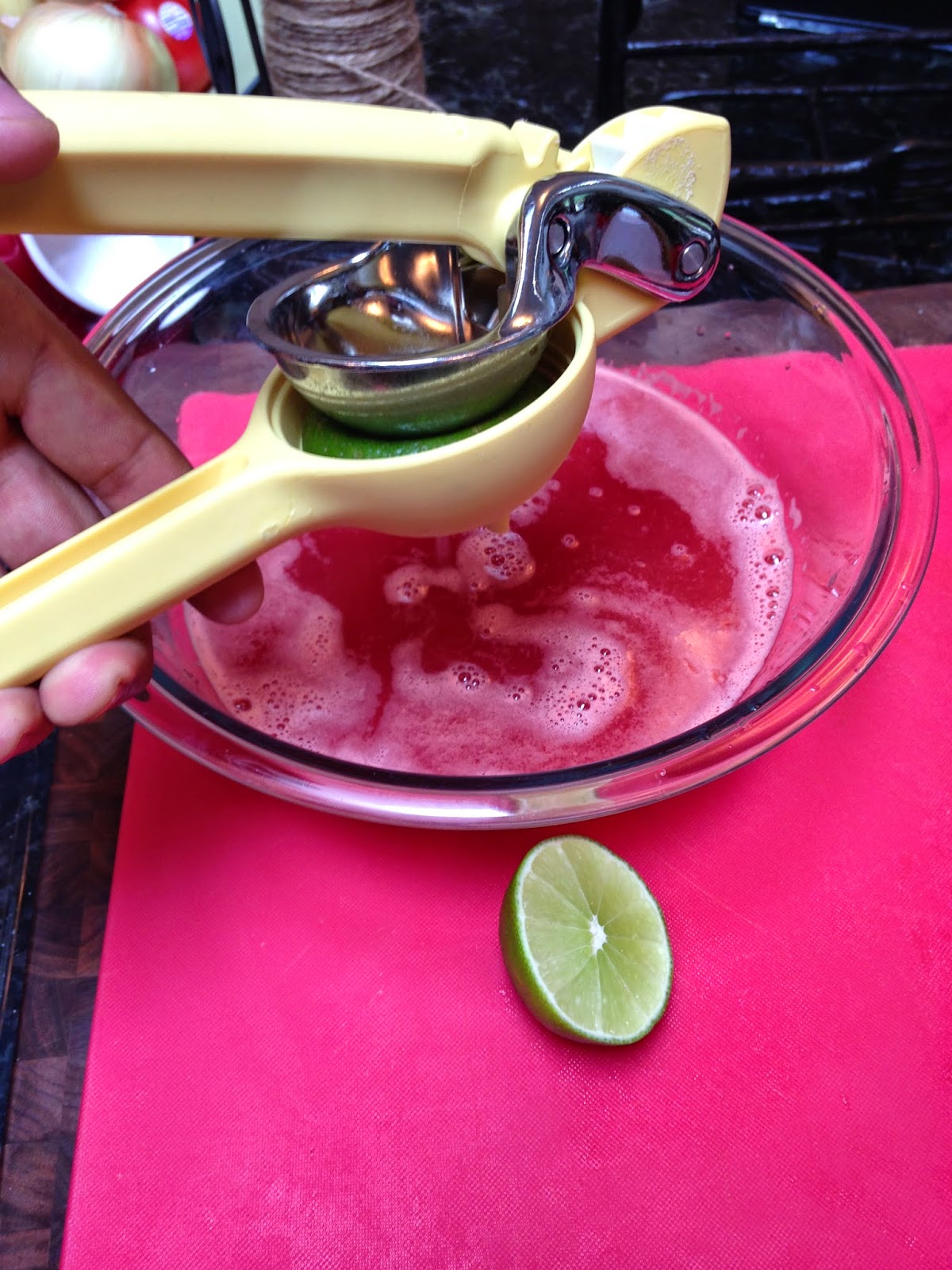 Now for the important step...TASTE IT. Is it sweet enough? Do you need to add more simple syrup? Now is the time. One other thing I like to do before tasting it is add a pinch of Kosher Salt. Ever had watermelon with salt on it? How about cucumbers with salt on them? Delicious, no? Well the great thing about salt in this is it brings out the sweetness, so you won't need to add as much simple syrup. 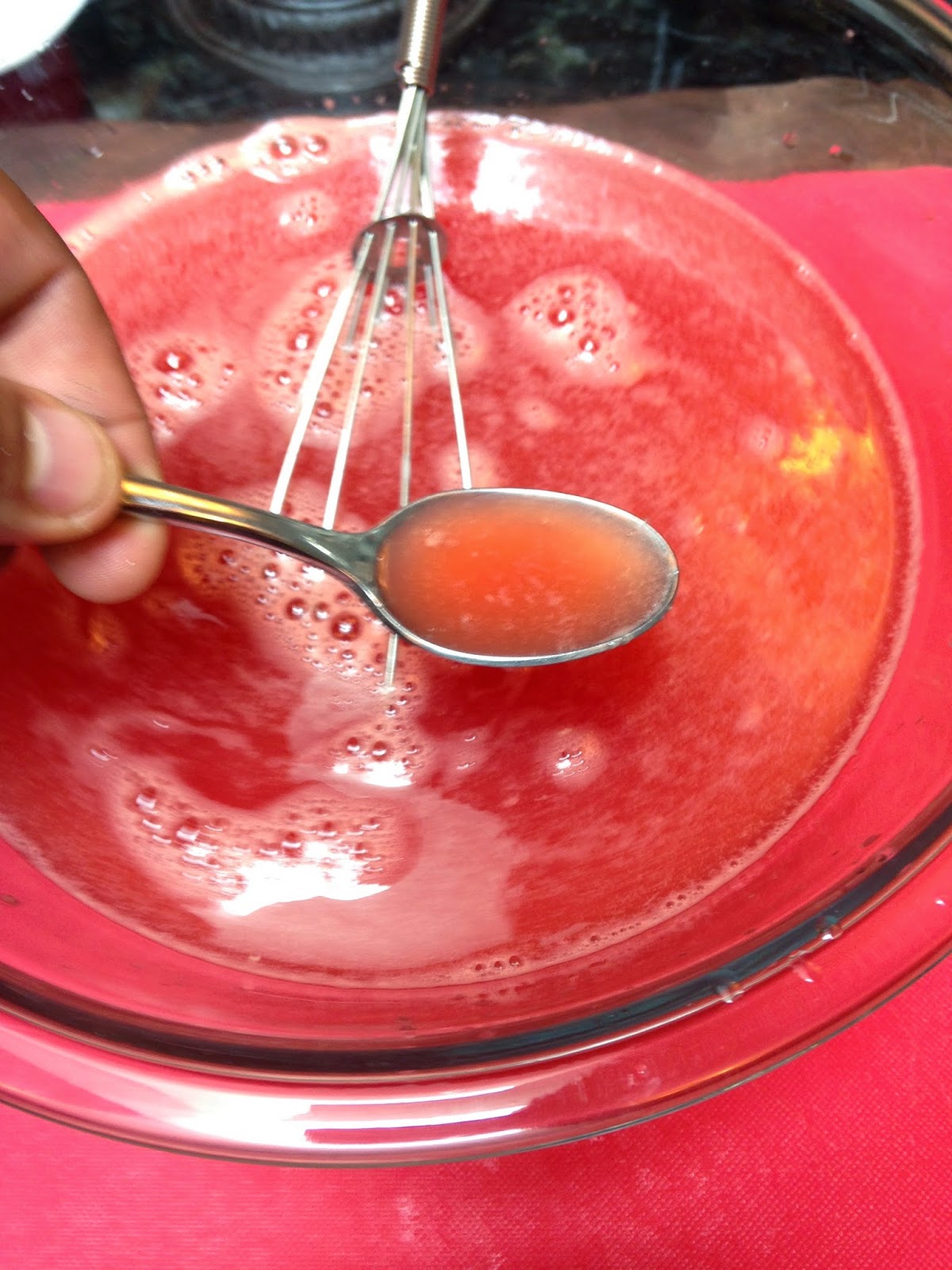 Once you have the mixture to the sweetness you like...pour it into a glass or metal baking dish. I used a 9 x 13 pyrex dish. 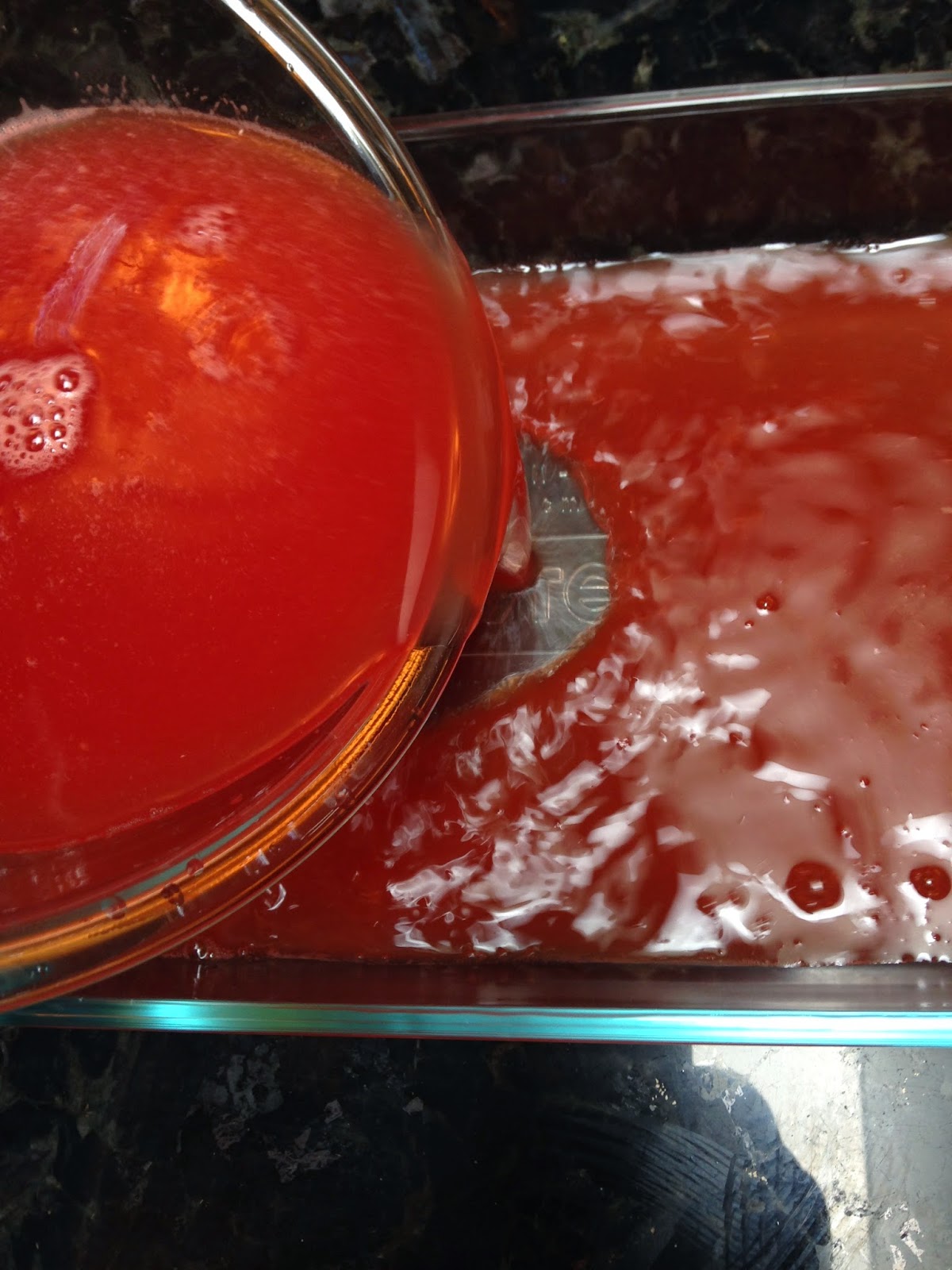 Pop this bad boy in the freezer and forget about it! Seriously...let it freeze...it should take a few hours. After a few hours this is what it'll look like. It will be frozen and the top will be sticky. 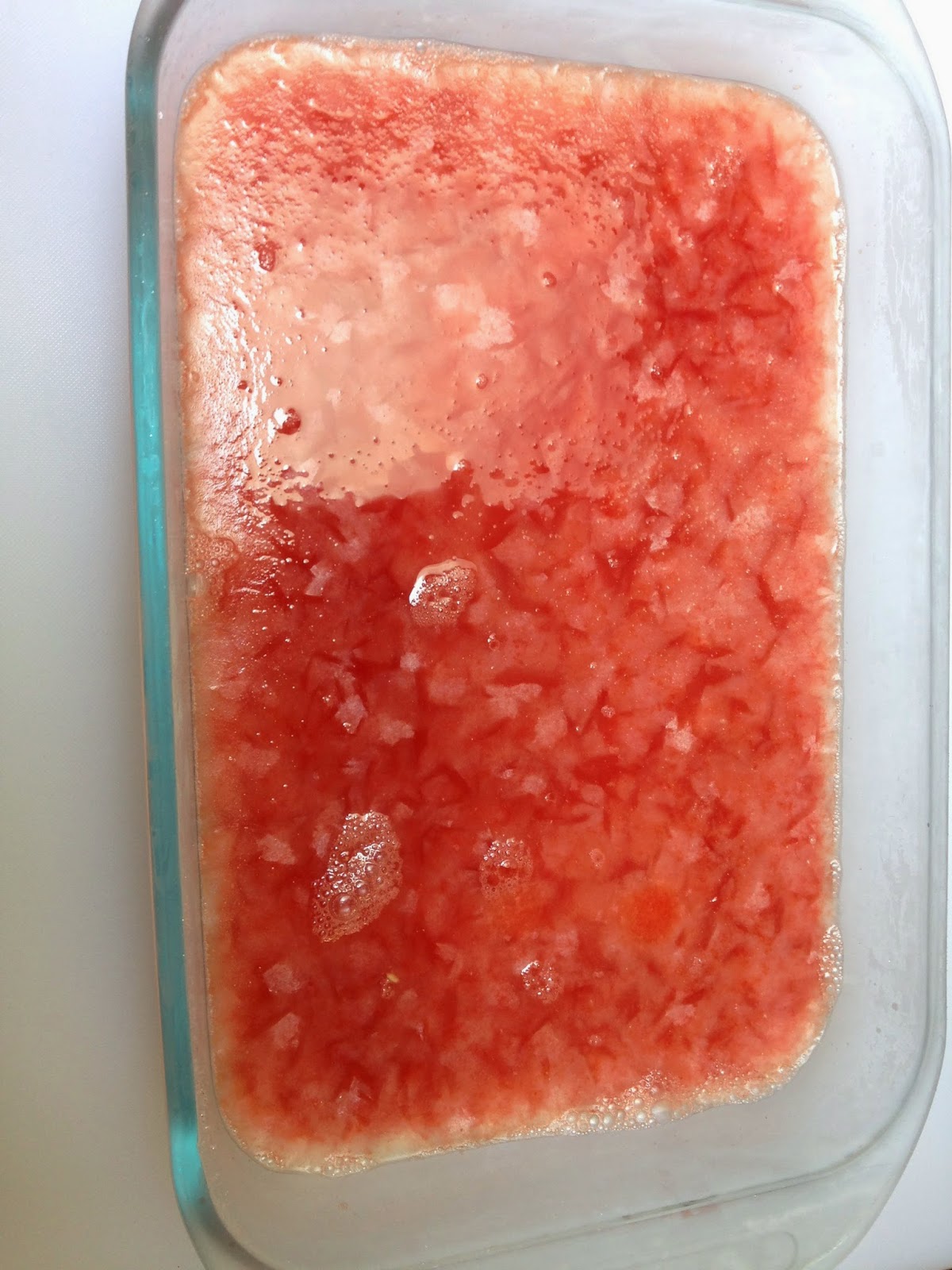 Now use a knife to cut the frozen mixture into small pieces. The smaller the better. 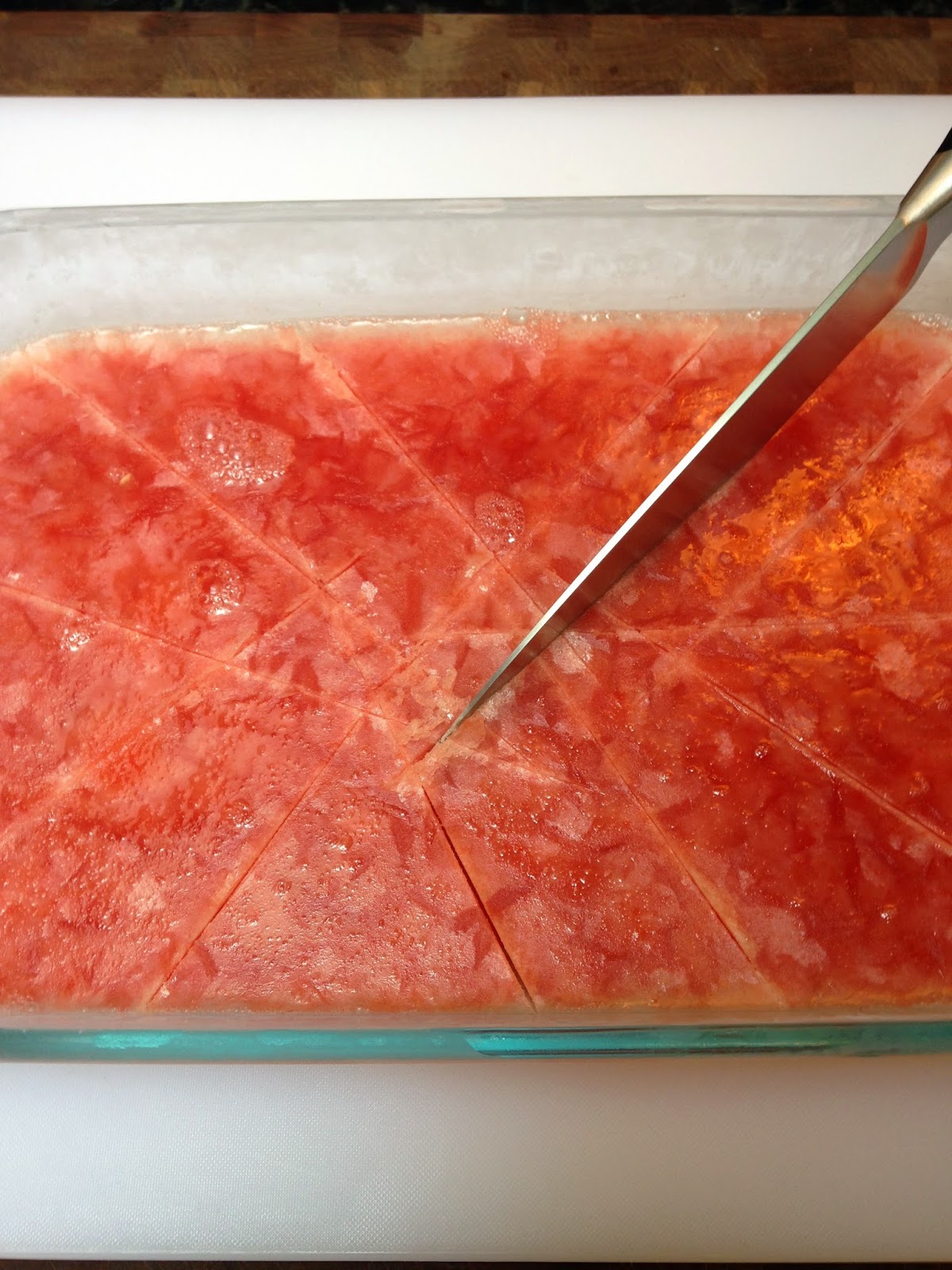 Now, a few at a time, place the chunks back into the food processor. Start with just a few, and then add more. If you add everything at once it doesn't work right. 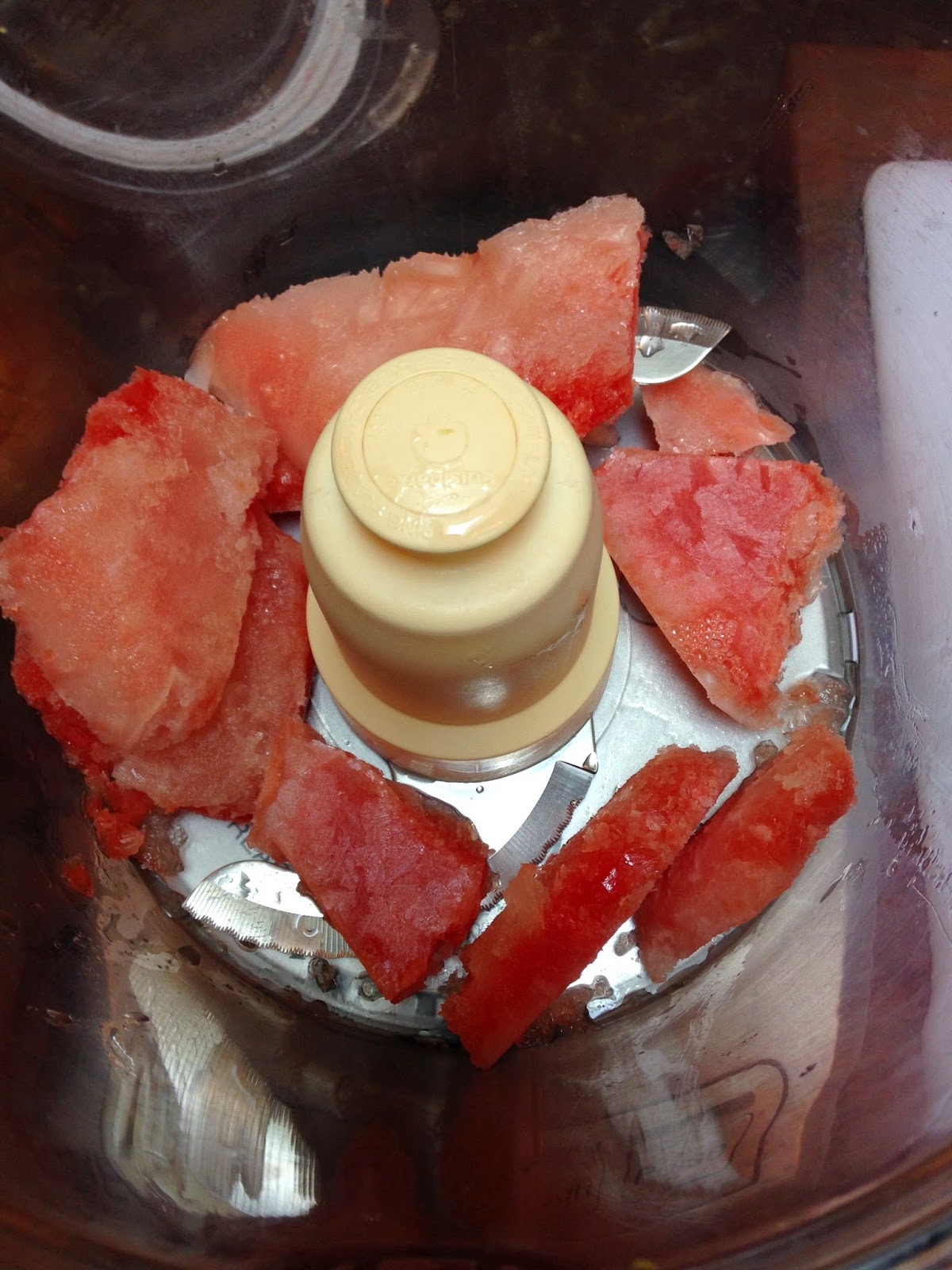 This is what you want the first ones to look like after you have pulsed them. Keep adding the chunks until everything is in there. Then turn on the processor and let it go for a couple of minutes. 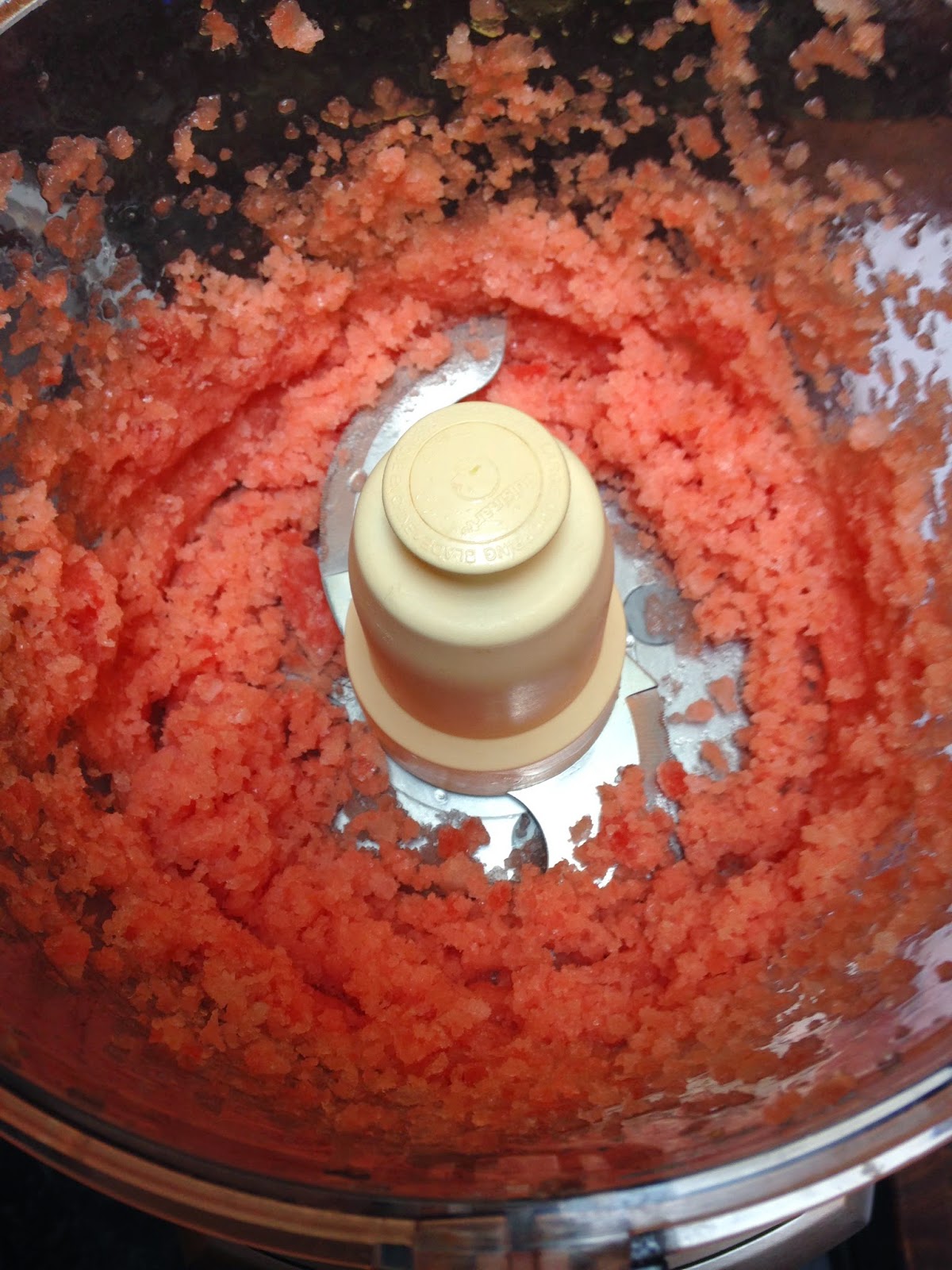 I like to get it nice and creamy. The heat from the motor of the food processor will somewhat melt the mixture allowing it to get creamy like this. You don't have to get it as creamy, but let me tell you...this is like buttah. ;-) 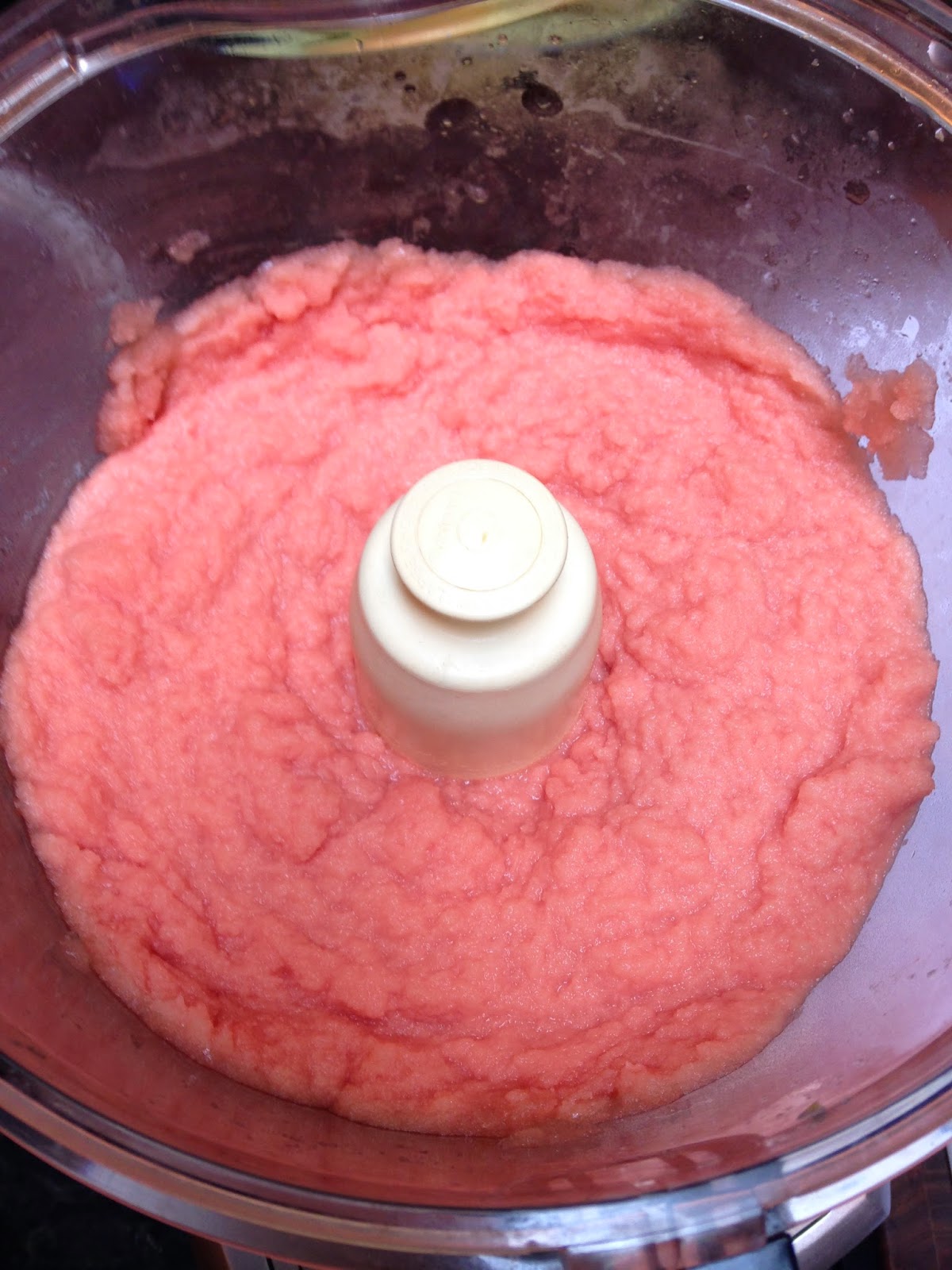 Scoop it out into a freezable container. Doesn't that look creamy!?! Then pop it back into the freezer until you need it. 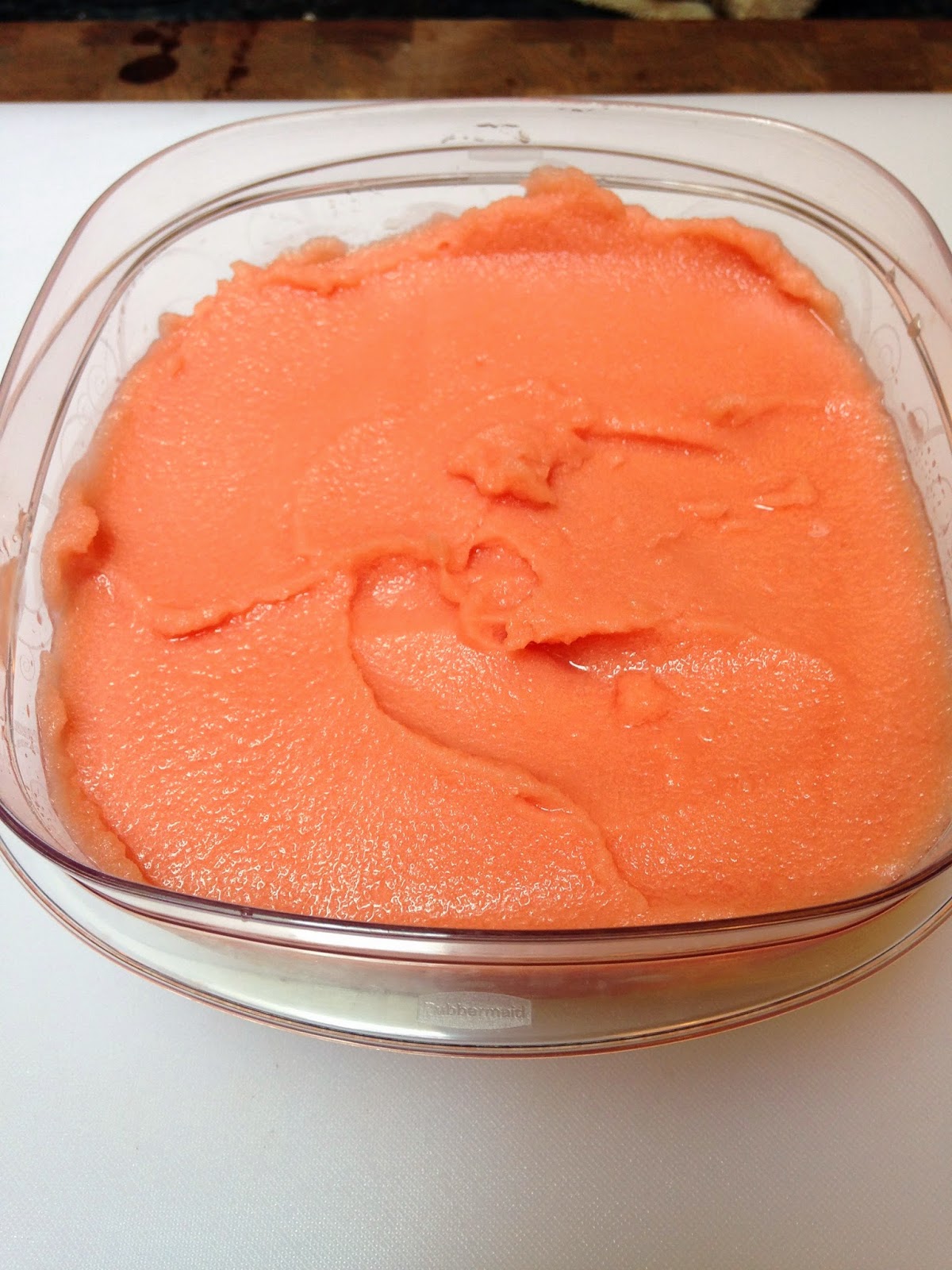 This wonderful treat is so cool and refreshing on a hot day! I like to serve it in a small bowl with just a sprig of mint. :)

Oh who am I kidding...most of the time I just grab the container and a spoon and go to town...I usually get strange looks from company when I do that. ;) 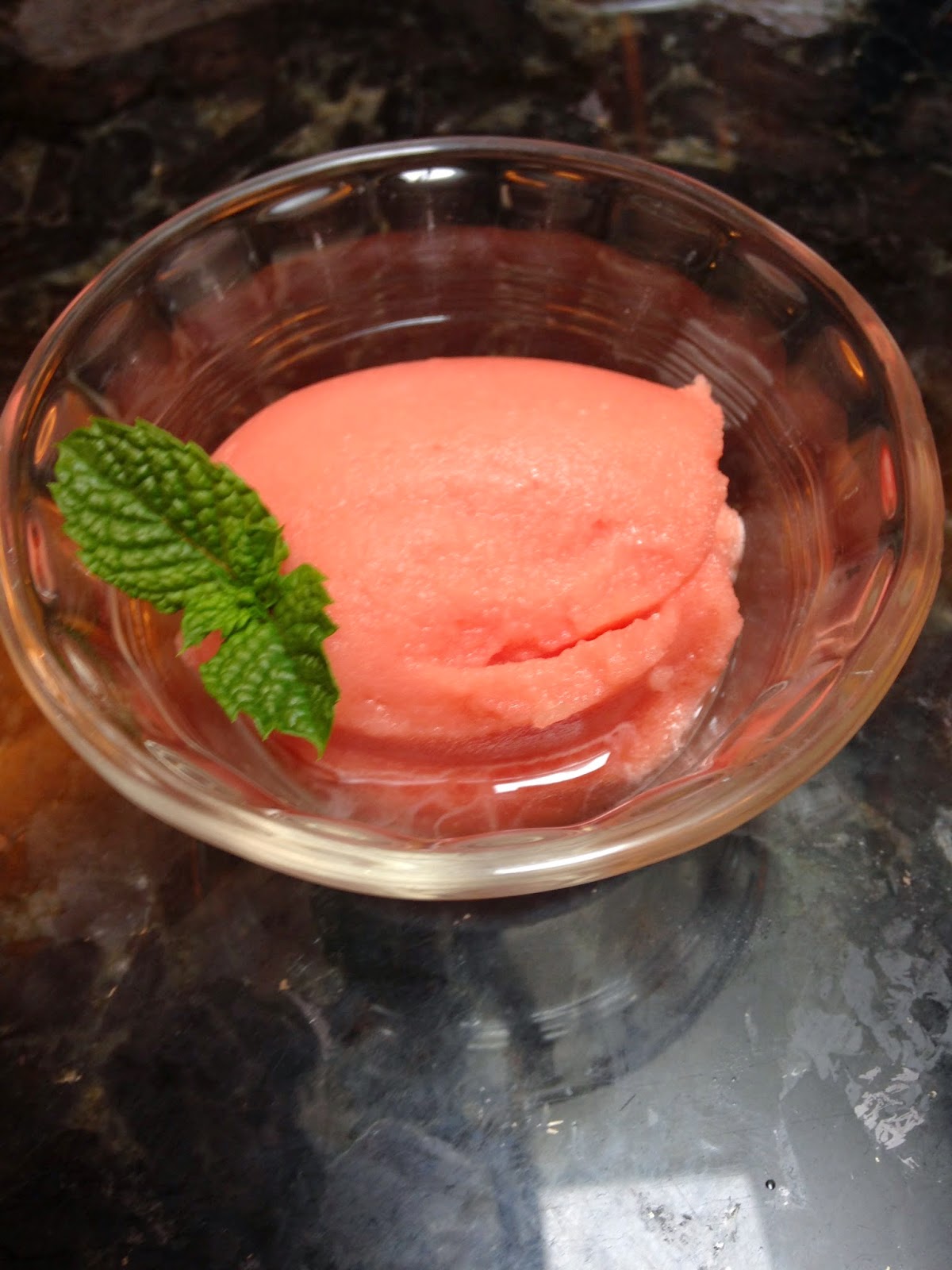 I'm not going to lie to you...after I finished typing the instructions...I went and grabbed a bowl of this stuff! You wouldn't think of putting watermelon and cucumber together...but they are such a refreshing combination! The main flavor is watermelon, but you get the hints of cucumber every now and again.

My father in law told me I should win an award for this...hahaha. I don't know if its that good. Why don't you all give this a try and let me know what you think! I promise you...once you've made this...you won't buy sorbet again. It's such a simple dessert that can be made in advance and your guests will LOVE it!

I think I'm gonna head back into the kitchen and get another helping!

Until next time...Keep Cookin'!
Posted by The REAL Housewife of Snohomish County at 6:49 AM