In March of this year I was approached by a dear friend asking if she could commission me to build something that I'd never really heard of before. I did some online research and told her "Of Course!" However, I didn't really know what I'd gotten myself into!

Mary is one of the sweetest souls I've ever met. We met through The Healing Center in Seattle because we were both volunteering for the children's groups. She has this amazingly rambunctious black lab named Lisette, who I won't lie...loves me more than any other dog I've ever met! (Sorry Cooper...but it's true) Every time she sees me she bounces around and jumps all over, Lisette...not Mary. ;-) A sweet dog with a wonderfully sweet woman.

Mary has been a huge supporter of my blog and has fallen in LOVE with Nigella Lawson's Chicken with 40 Cloves of Garlic. She's also seen all of my woodworking projects so she thought that she would hit me up to see if I'd be willing to tackle this project for her. She had a large maple tree in her front yard that needed to be cut down because it was dead and rotting inside, but she wanted to keep the stump because she uses it as a guide when she is backing into her driveway. She didn't want just a stump there though, so she started researching Little Free Libraries.

I invited her over to the Edmonds house, and we visited and then got down to business. I asked her exactly what she wanted, and she told me her vision. I took some time, drew up a sketch, ran it by her and she told me to run with it! So that's exactly what I did. What an amazing experience this was. Here are the pictures from the build. :)


I started by building the frame with 2 x 2s. If you look closely the piece of plywood that the frame is sitting on has the shape of the stump traced onto it! I did this so I knew exactly what the size of the Little Free Library needed to be! 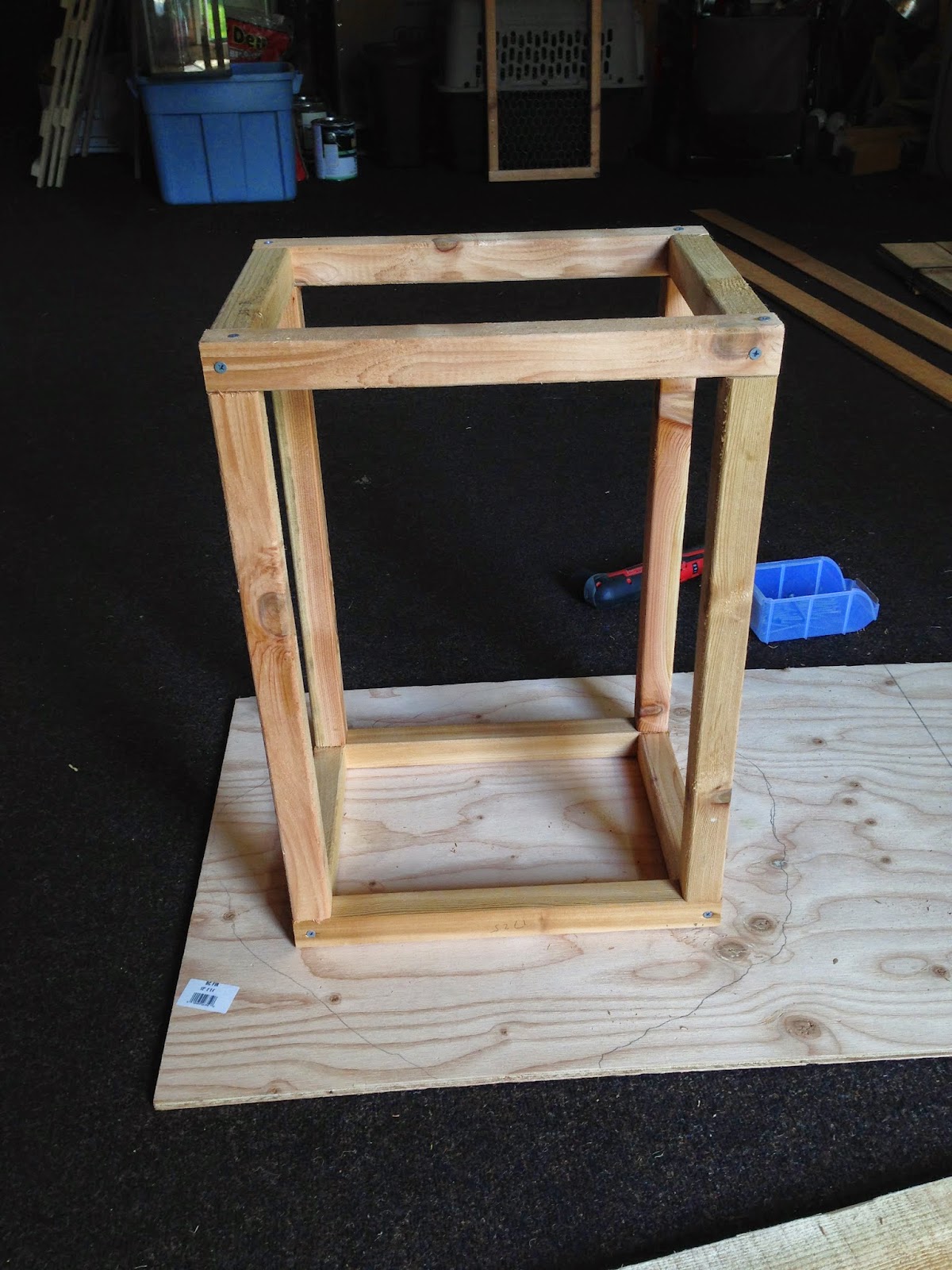 I then cut some thin plyboard, which is actually used as the bottom of desk drawers, to act as the inside walls. 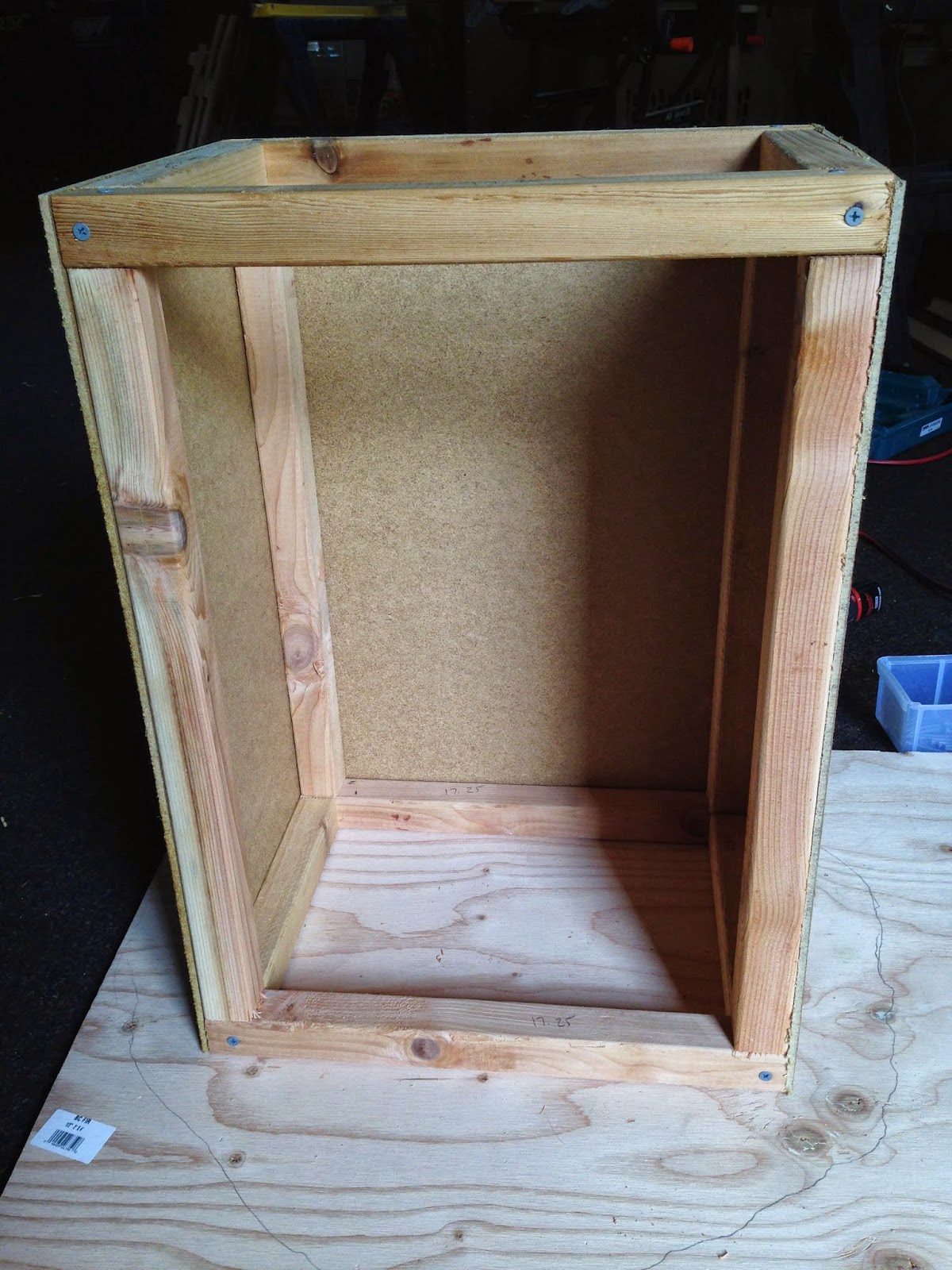 To make it water resistant, I wrapped it in roofing paper, and used staples to secure the paper down. 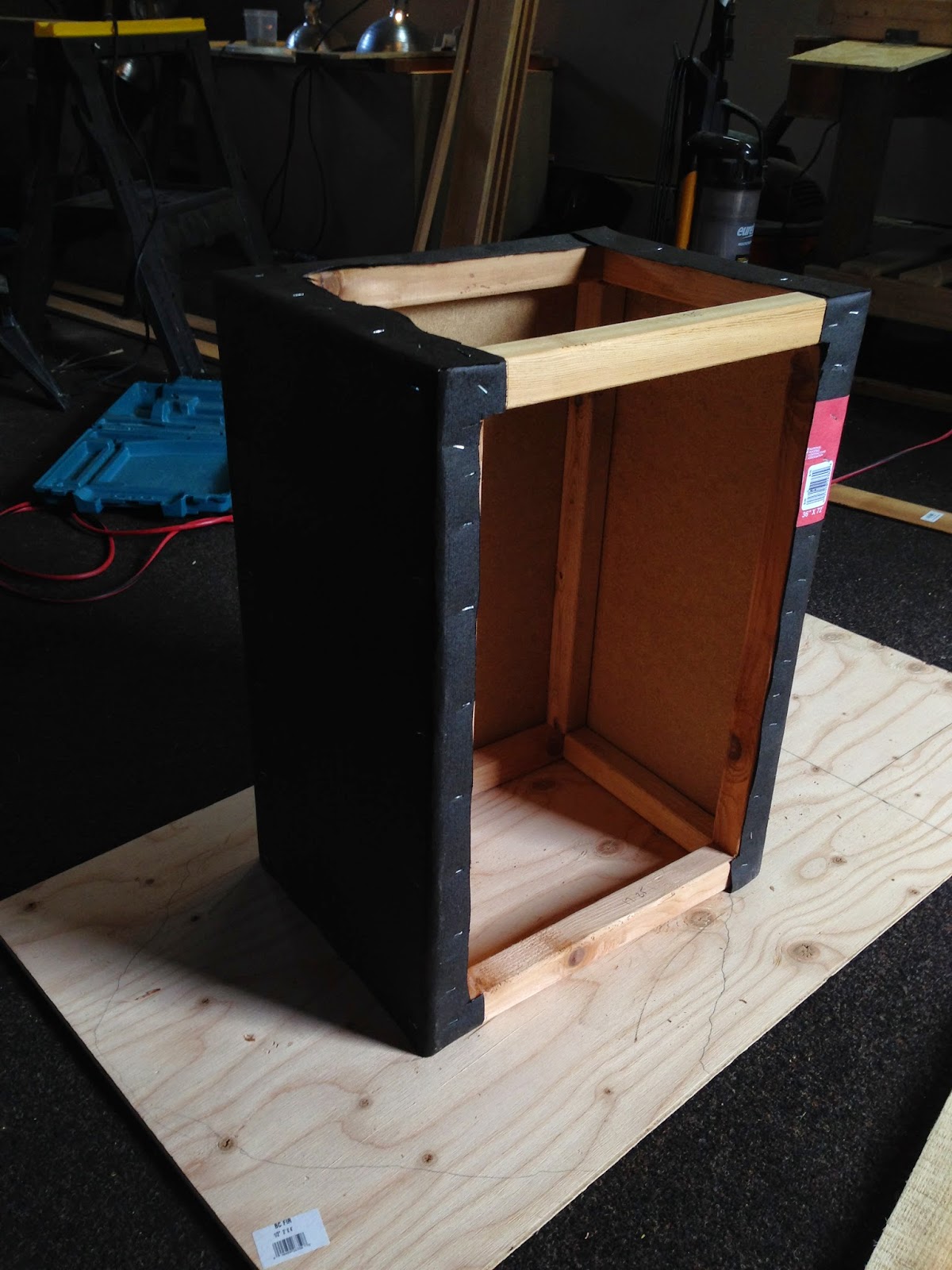 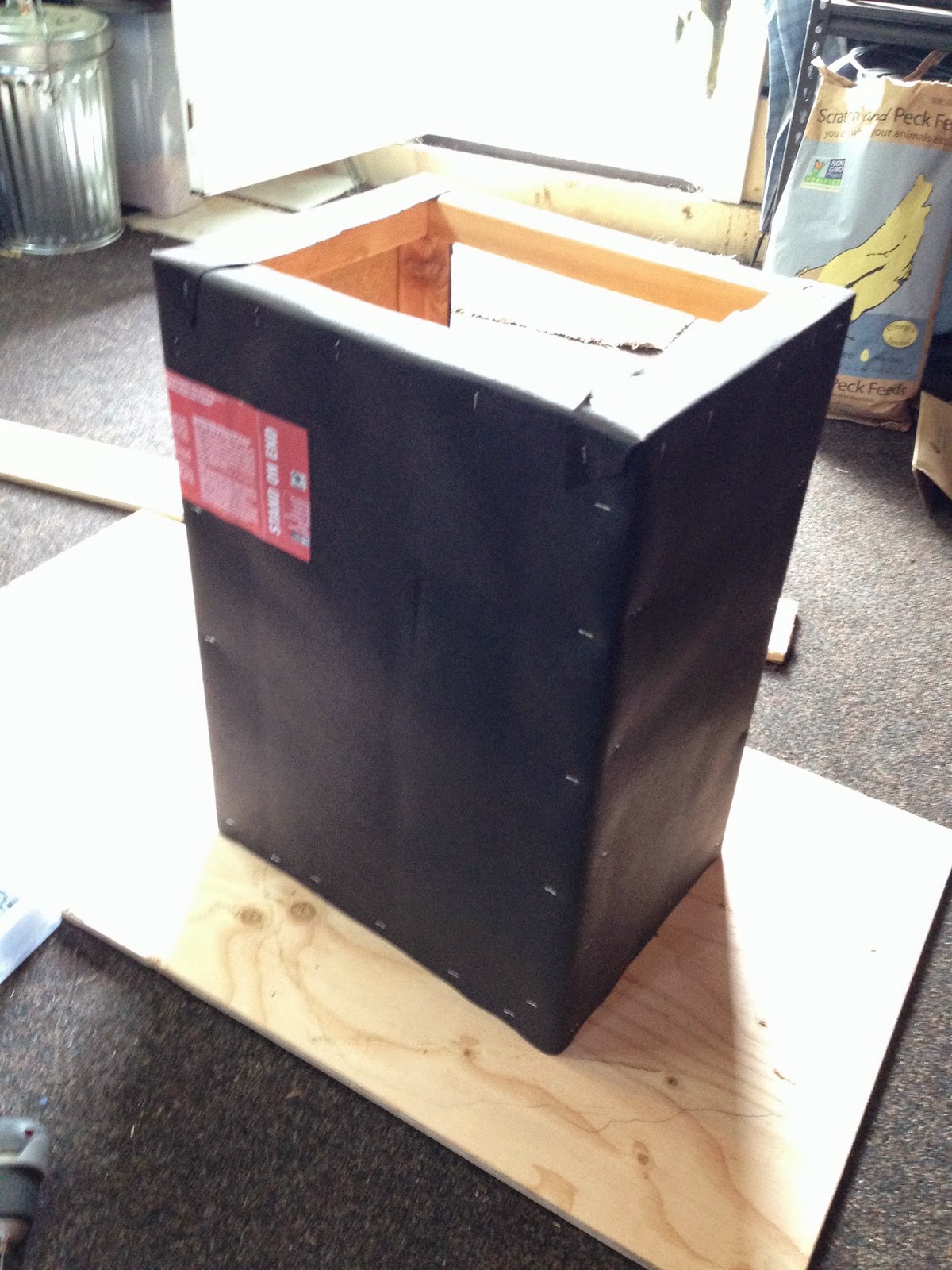 Then I used cedar fence slats as my siding. The outside of Mary's house is cedar and she wanted something that would age and look beautiful, and that's just what cedar does! 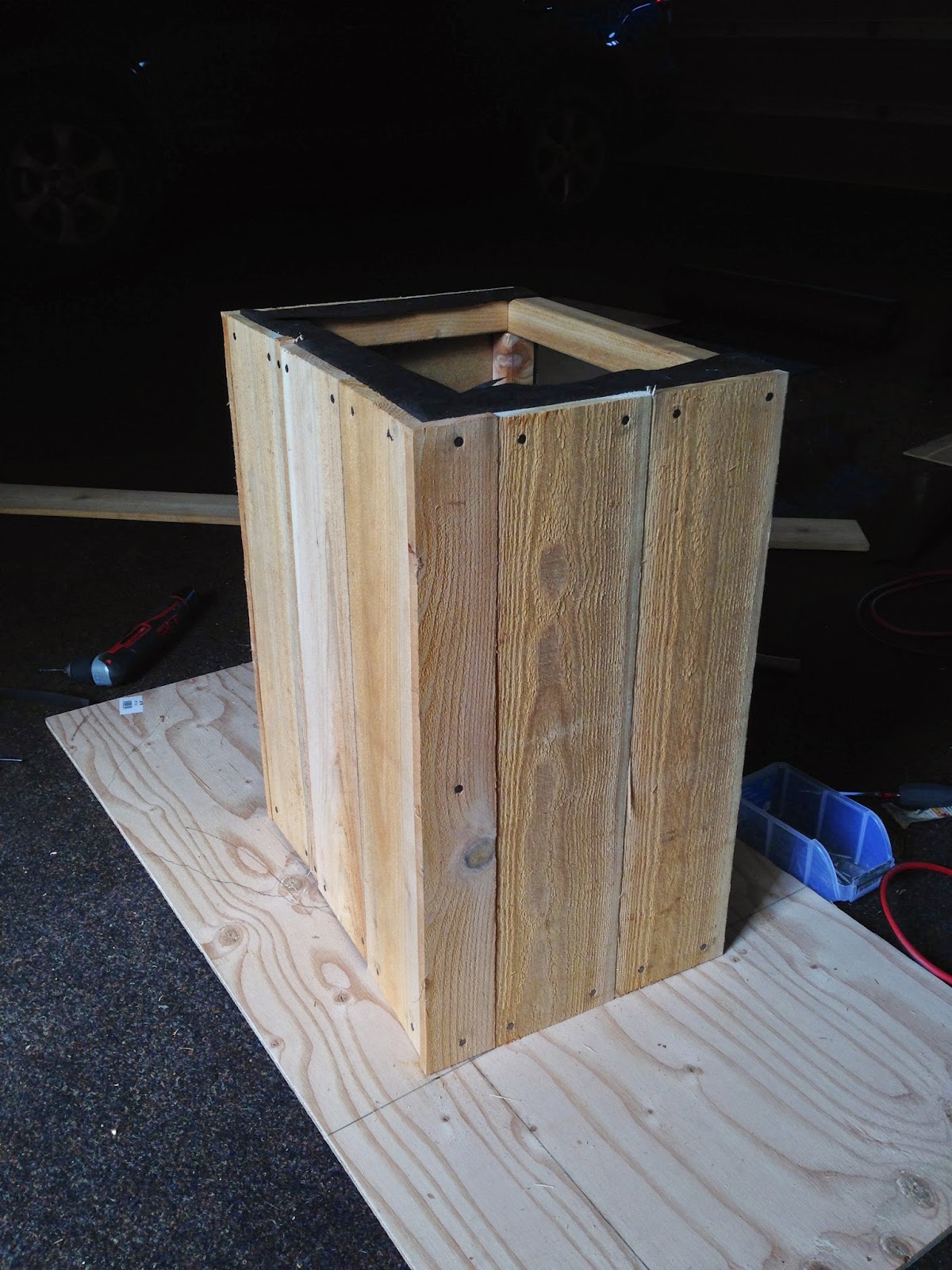 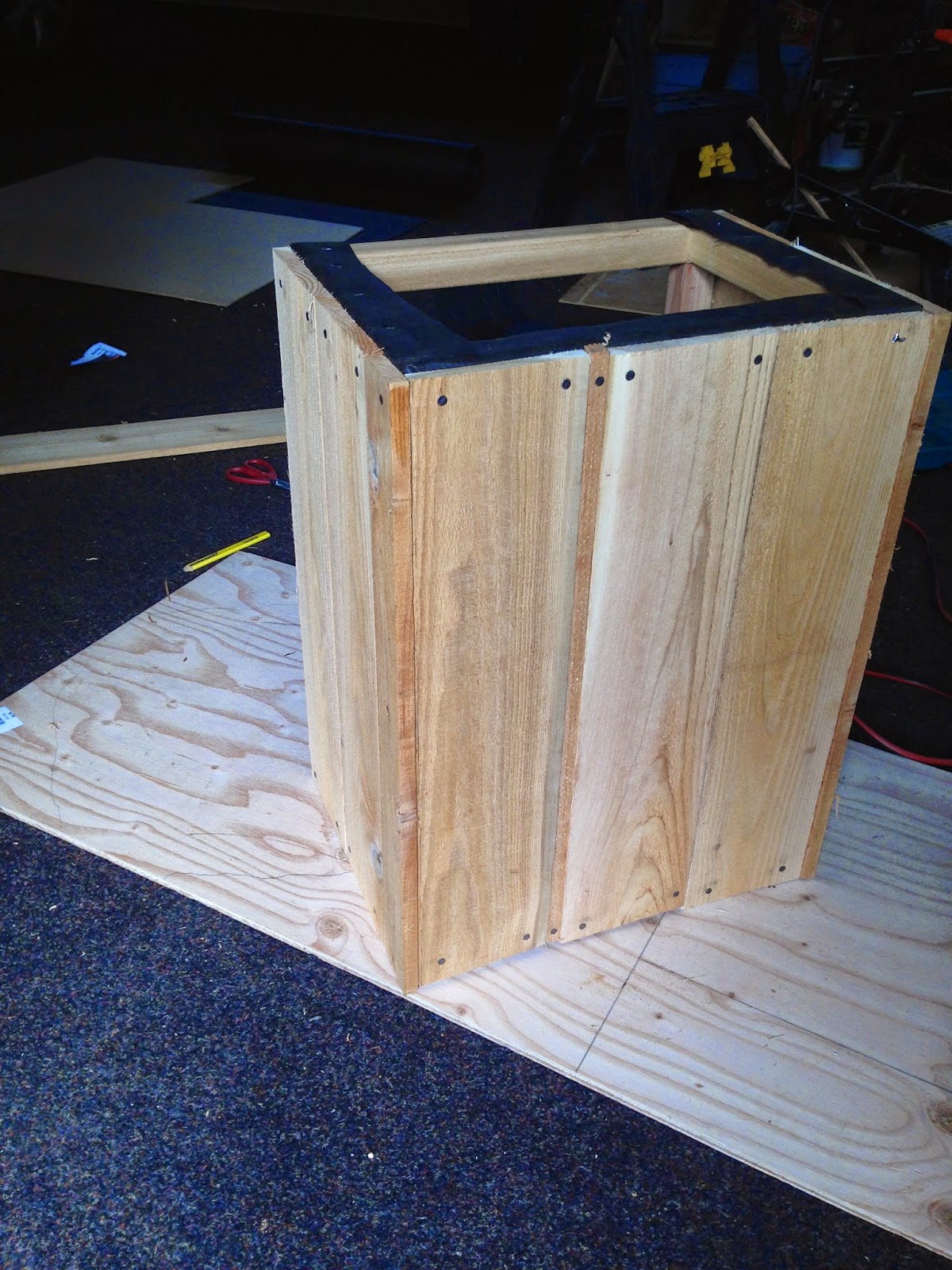 I put two thin strips of the cedar slats on the front to frame out where the door will go. 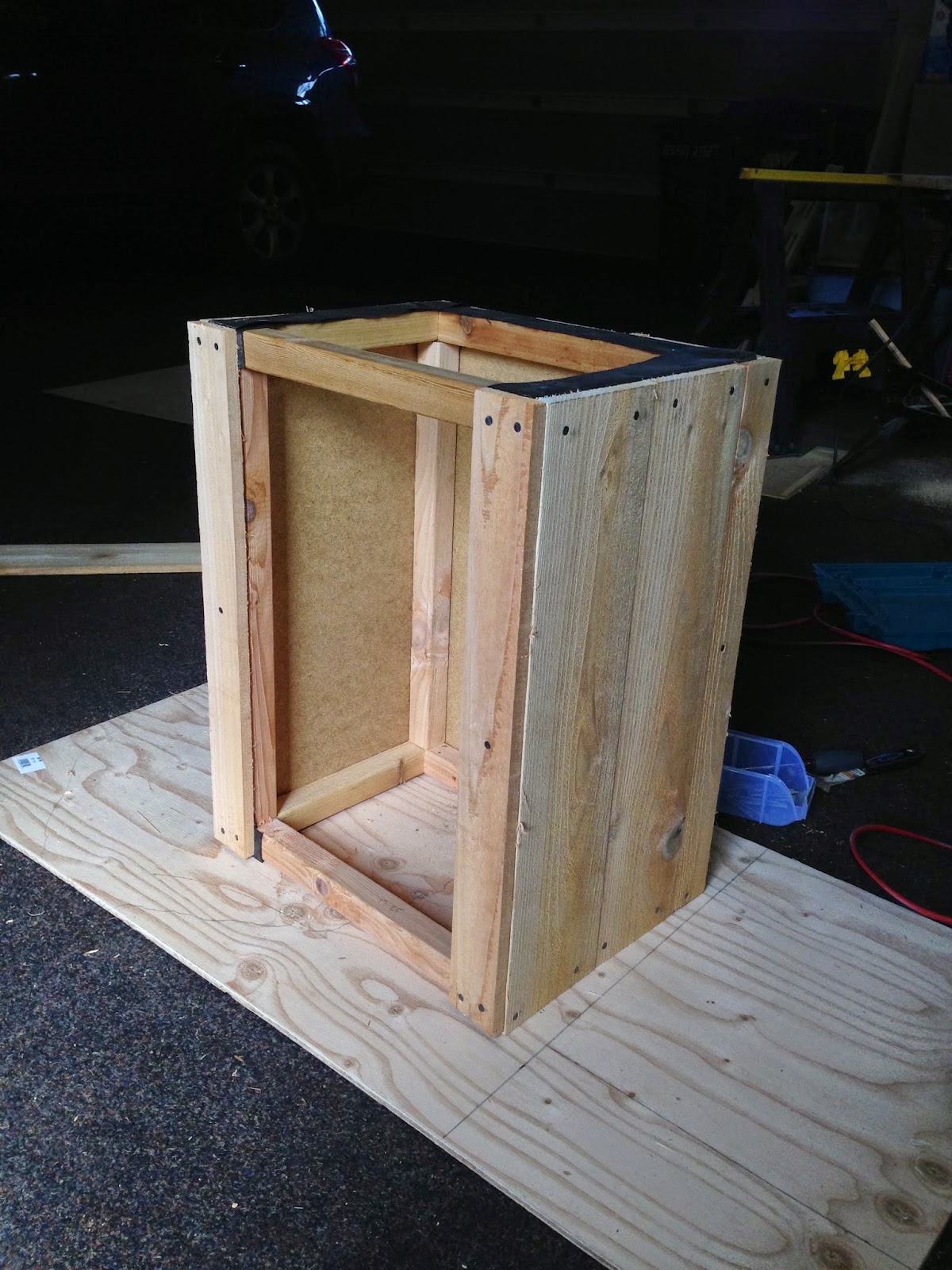 Now it was time to build the roof. I used 2 x 2s for this as well, and used my miter saw to cut the angles. I used a 2 x 2 for the top support as well. 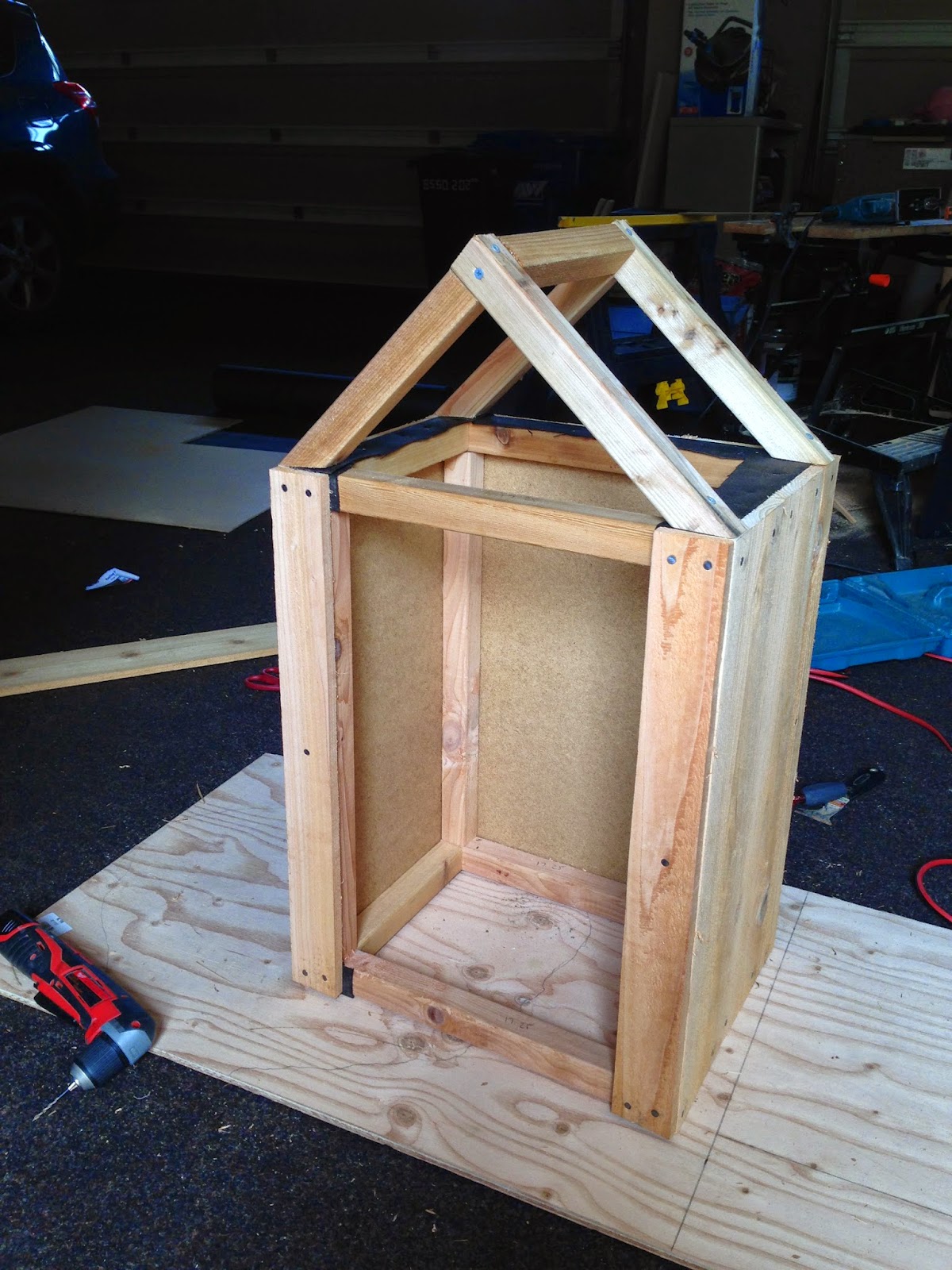 Next came the cedar slats to form the roof sheathing. They are same slats I used for the siding. 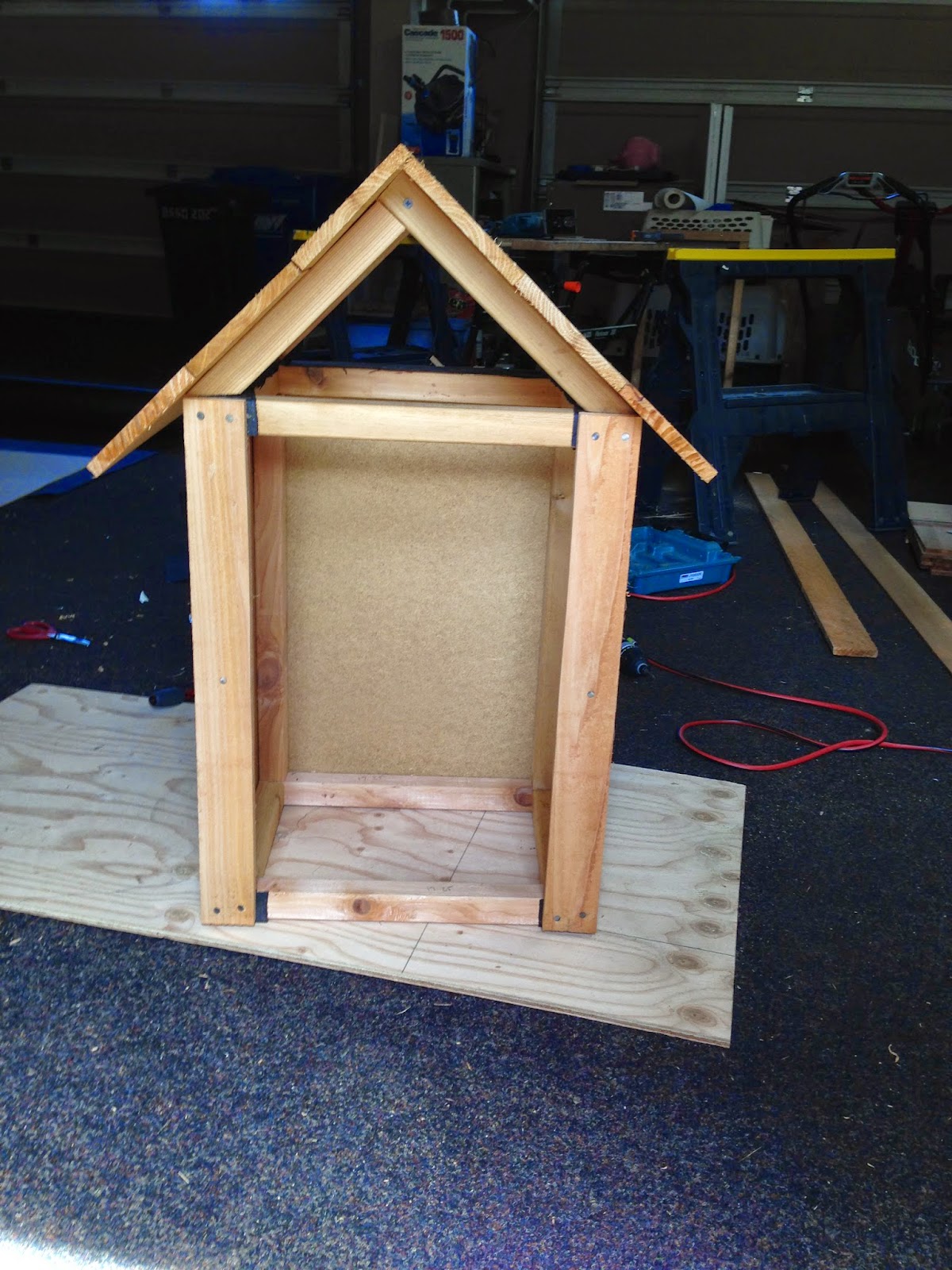 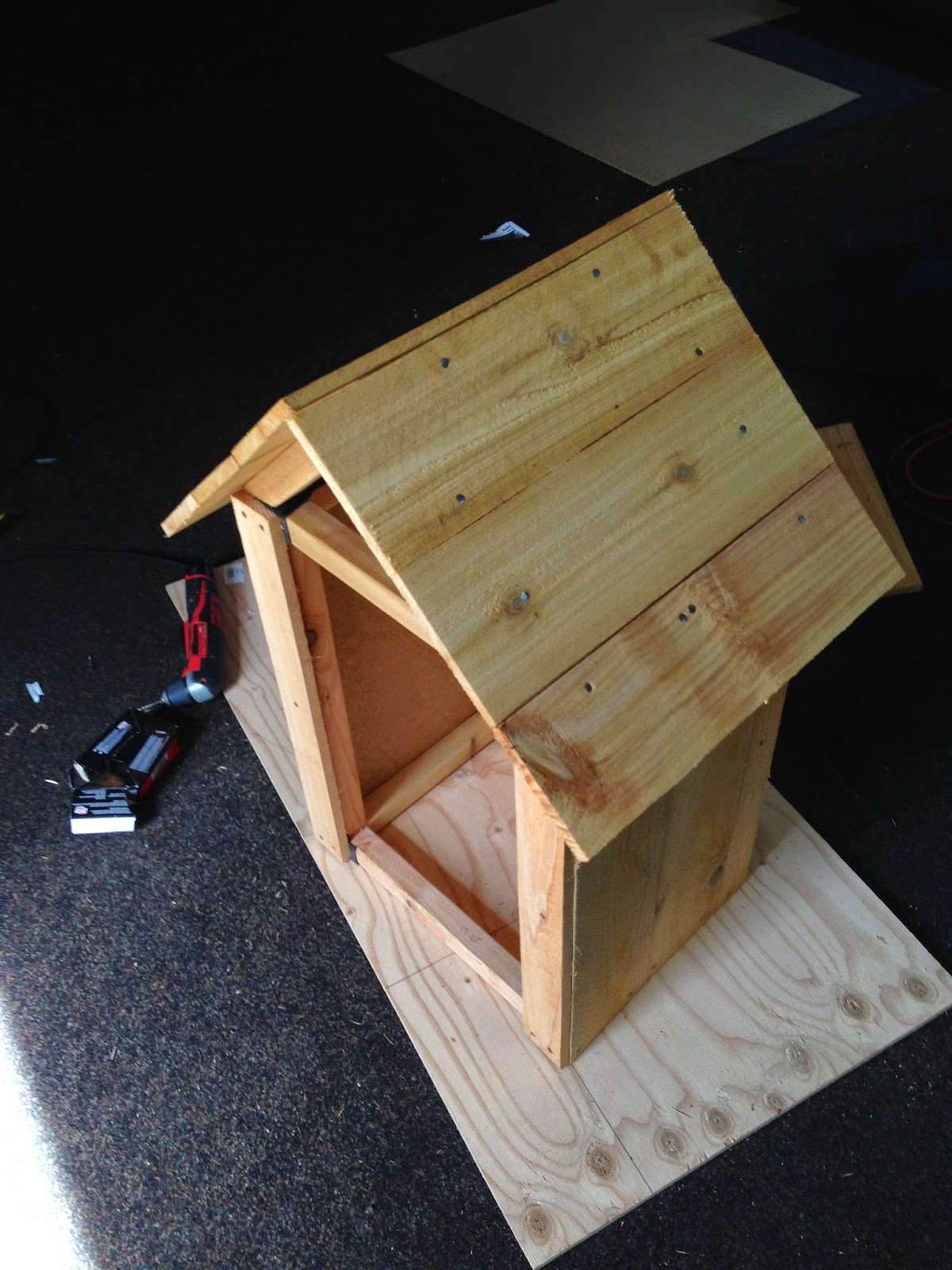 After covering the slats with roofing paper, I used cedar shake shingles, then used some ripped cedar slats for the peak of the roof. 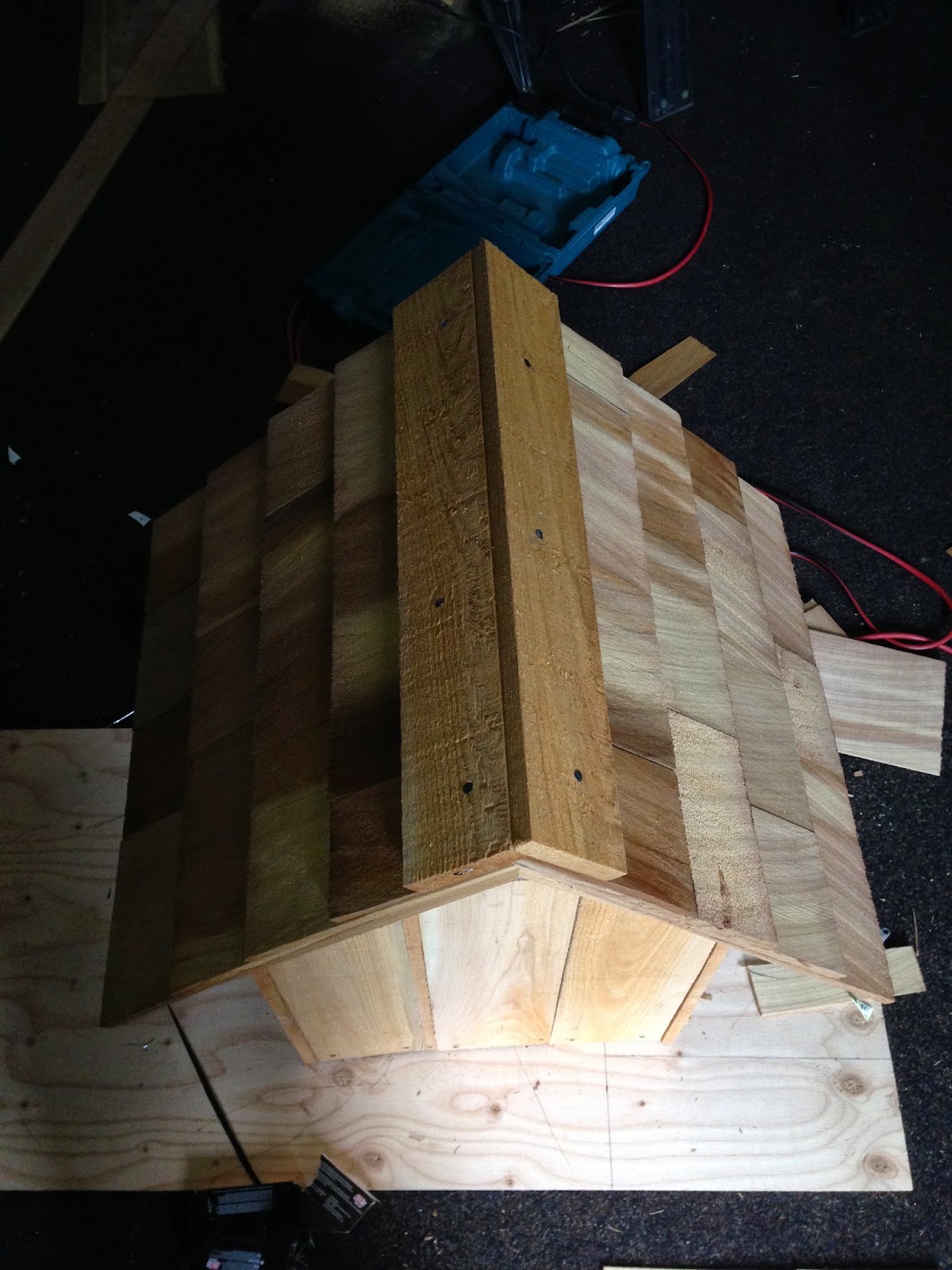 Next I ripped some of the cedar slats to lay horizontally under the eves. I just liked the way it contrasted with the vertical slats. 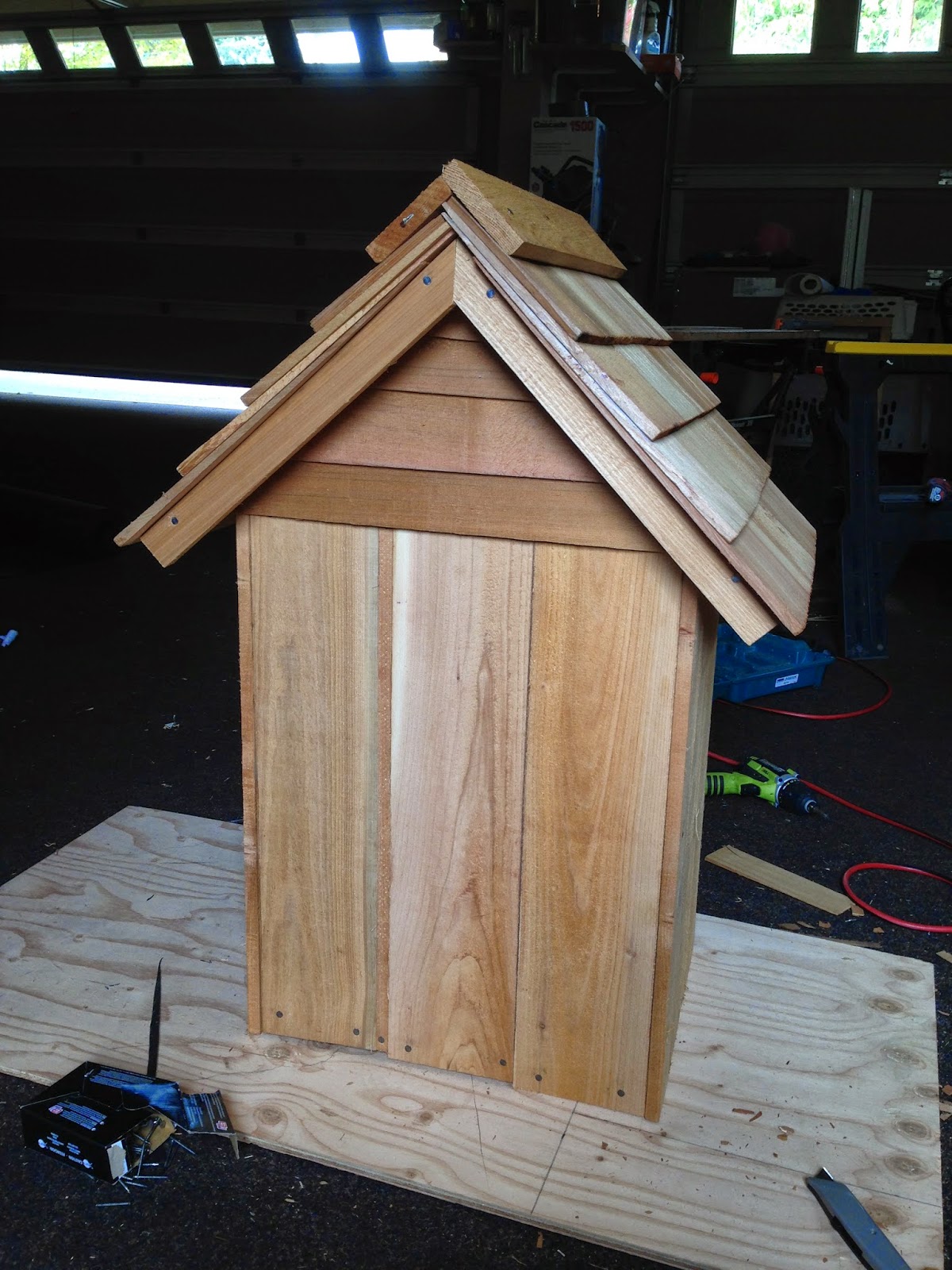 I did the same for the front, and then trimmed out the door opening. 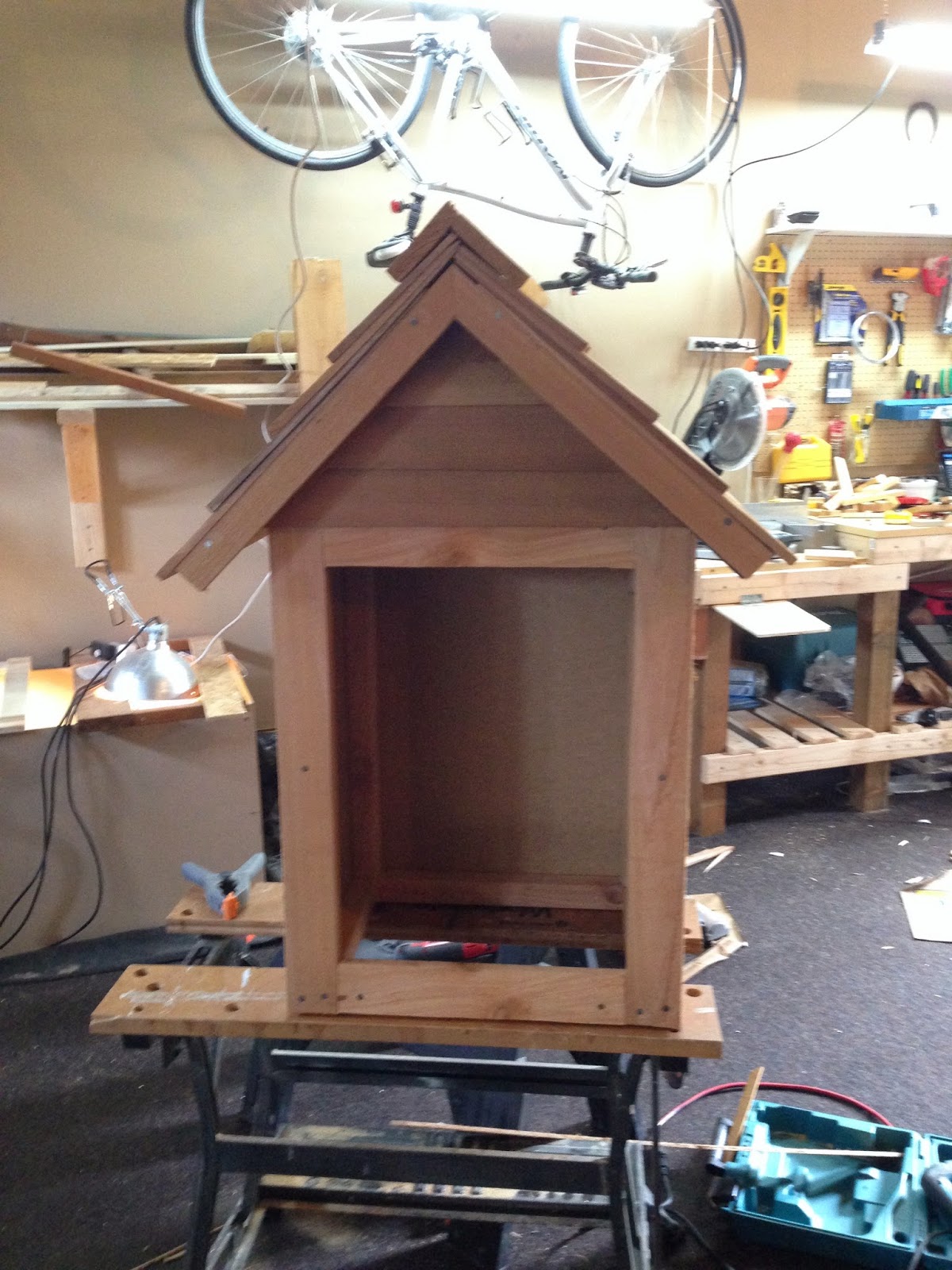 Now it was time to build the door. Using my miter saw I in essence made a picture frame out of cedar and cut a piece of plexi-glass to fit. I then used window caulking to secure the plexi-glass in place. 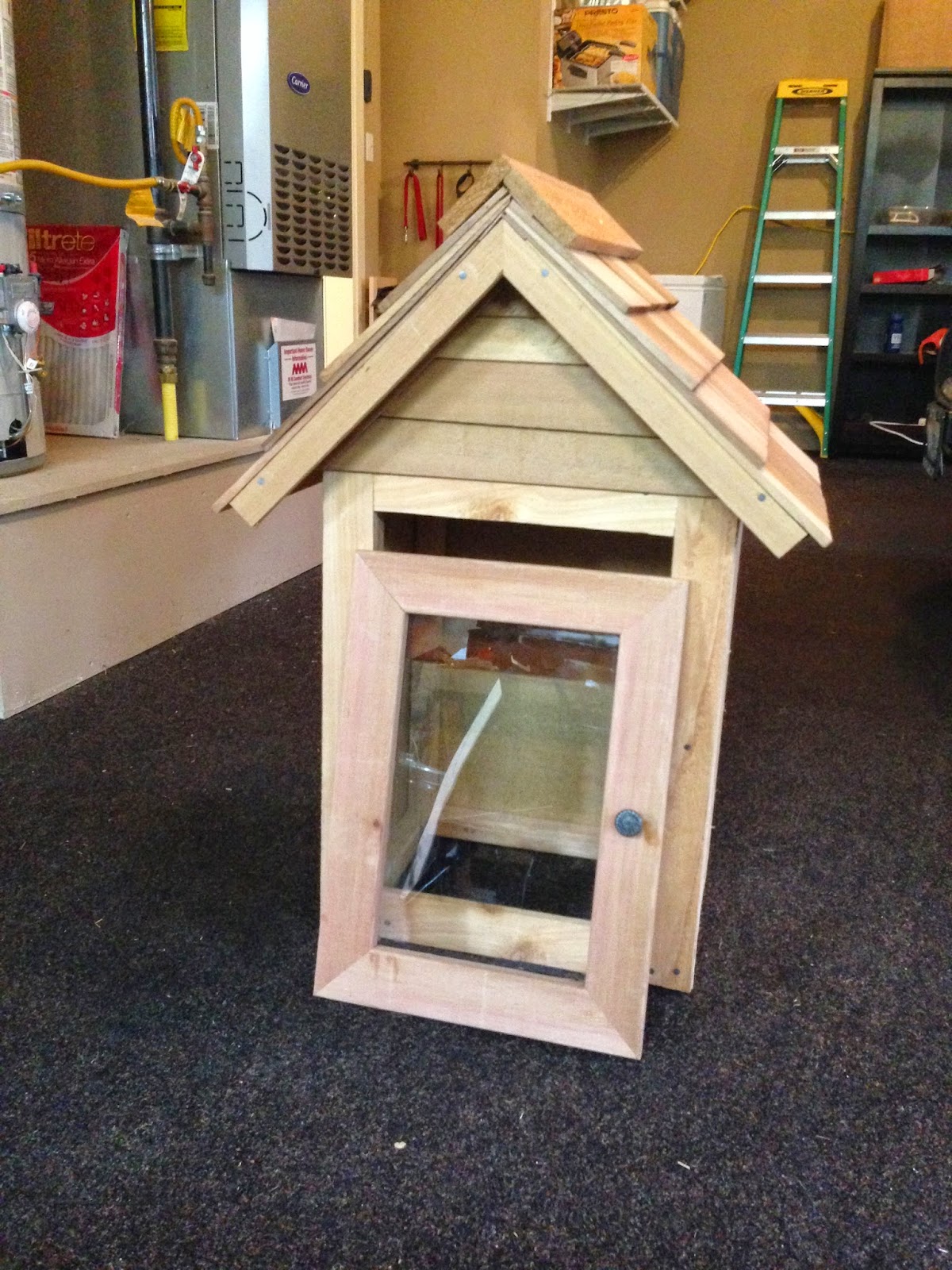 Once the door was built it was time to build and install the shelf. I drilled holes up all four of the corner posts so the shelf is adjustable. 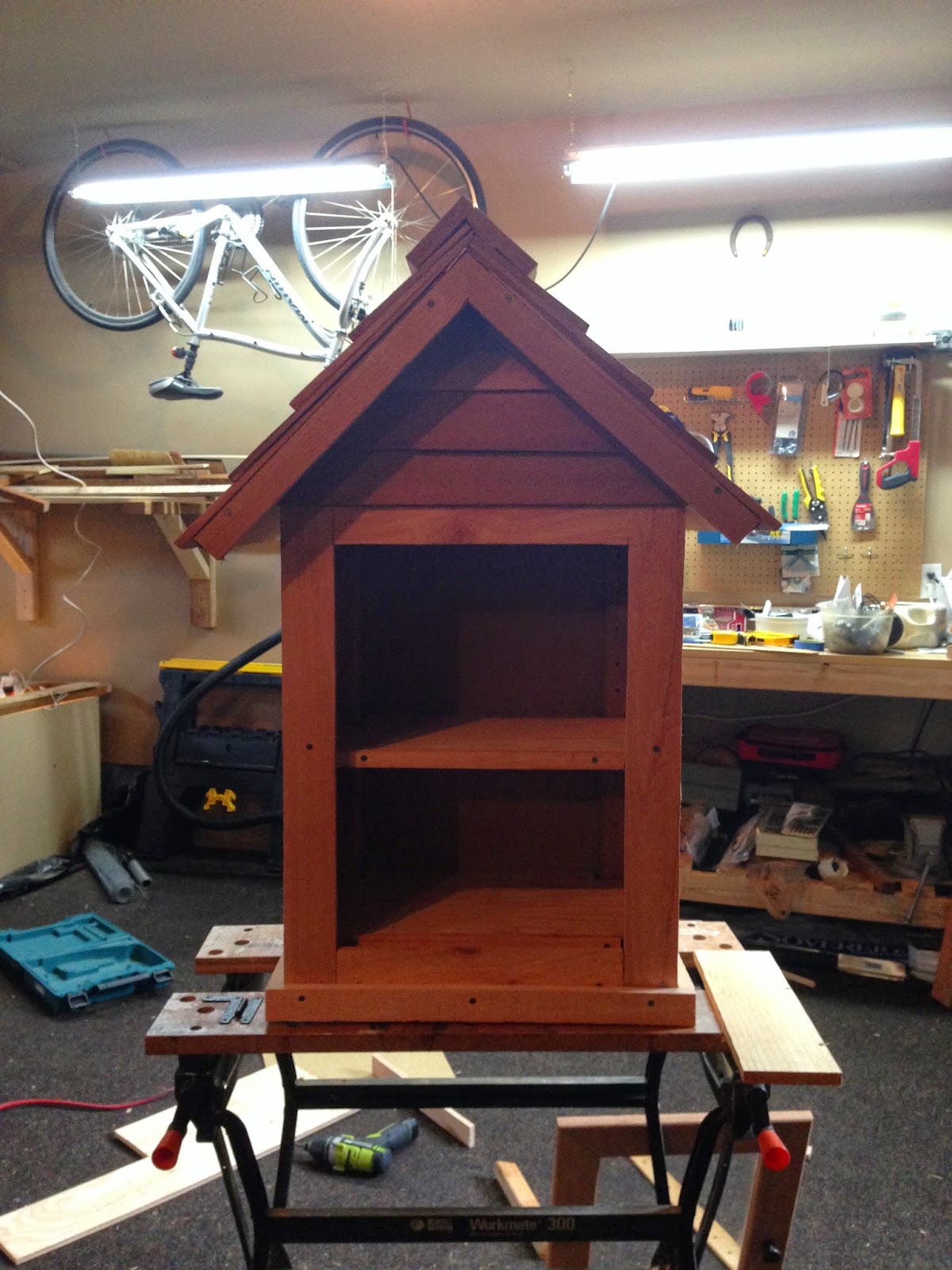 Now it was time to install the door hardware and hang the door. The hardware that I used was actually some that Mary had in her basement. They actually match some of the cabinetry that was in her house! 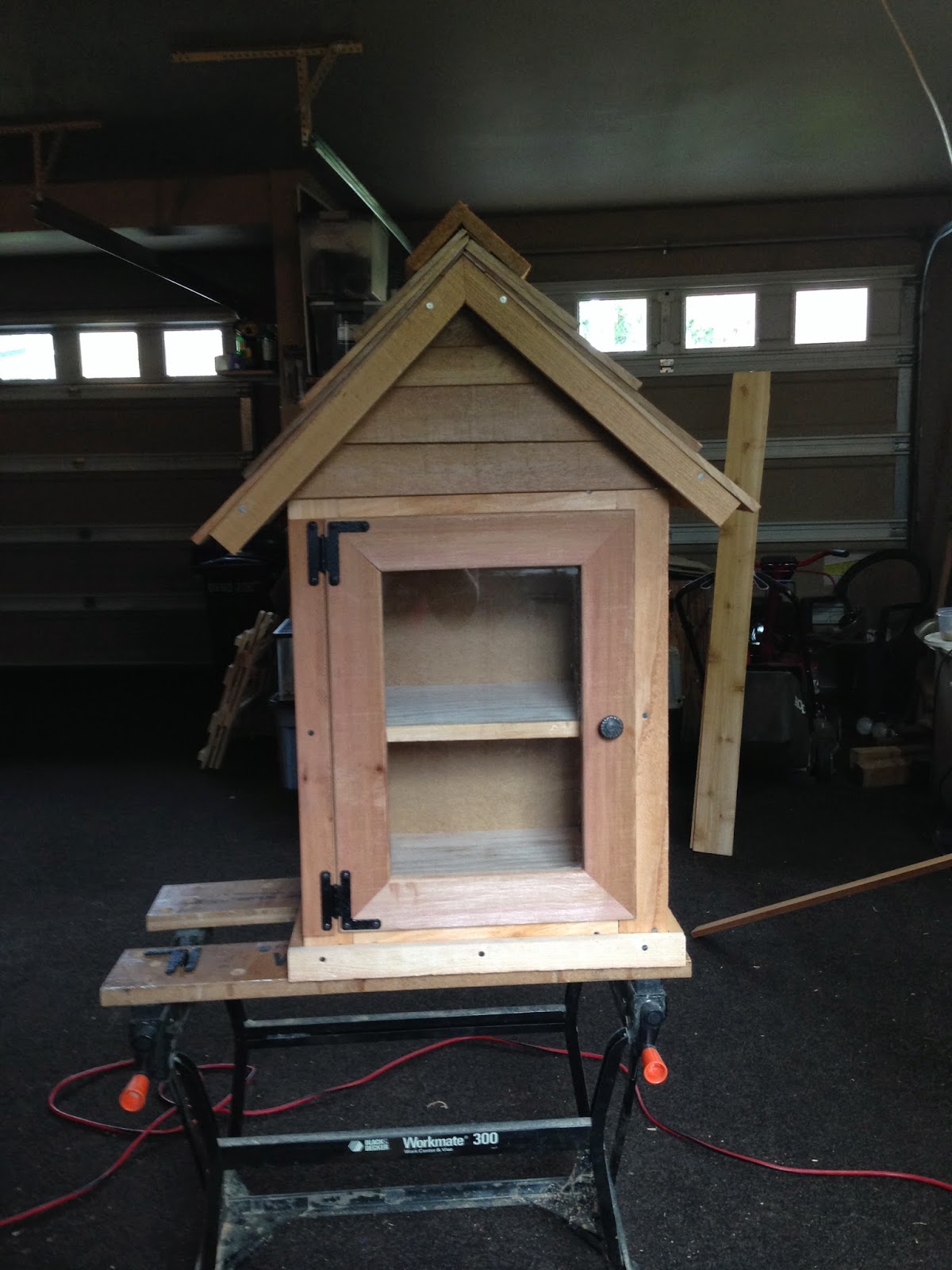 The door opens!!! And closes!! As you can see I also used thin strips of wood on the inside of the door, tacked them with little nails to act as the frame around the plexi-glass. 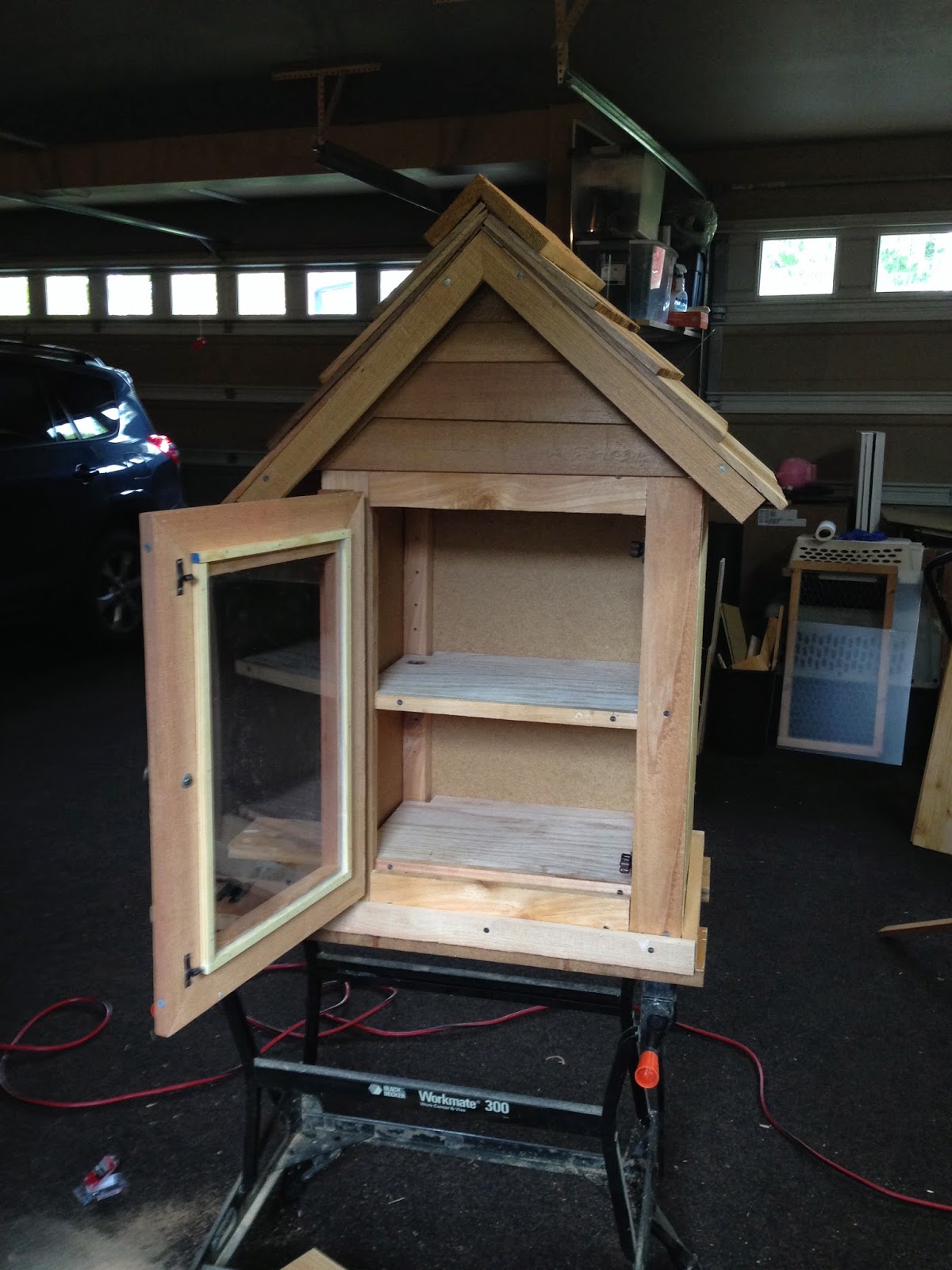 Here it is on the stump at Mary's house! She had the awesome idea of making a sign for it that reads "Little Free Library" out of scrabble tiles!! She is so creative!﻿
﻿ 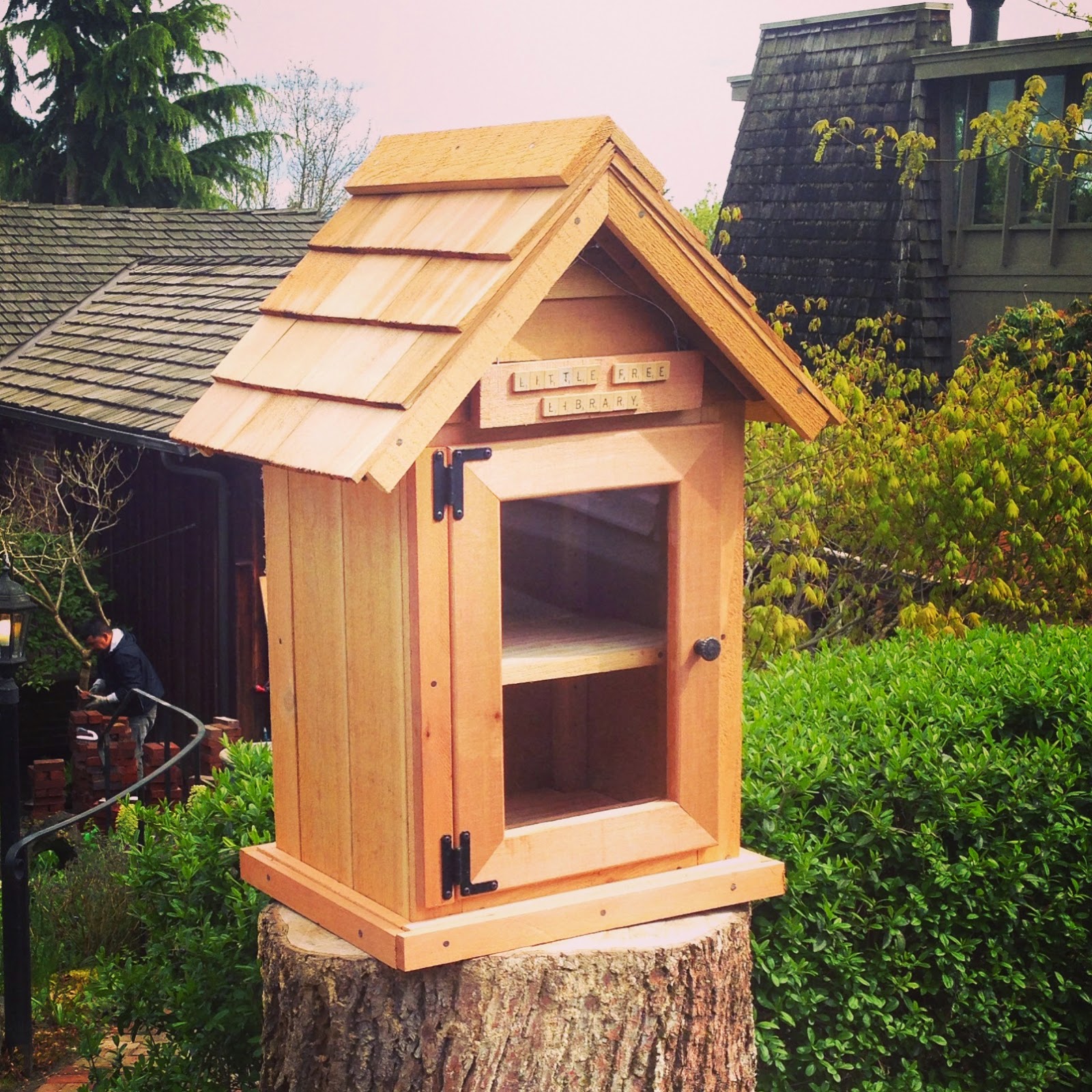 Here is what it looks like from the back! 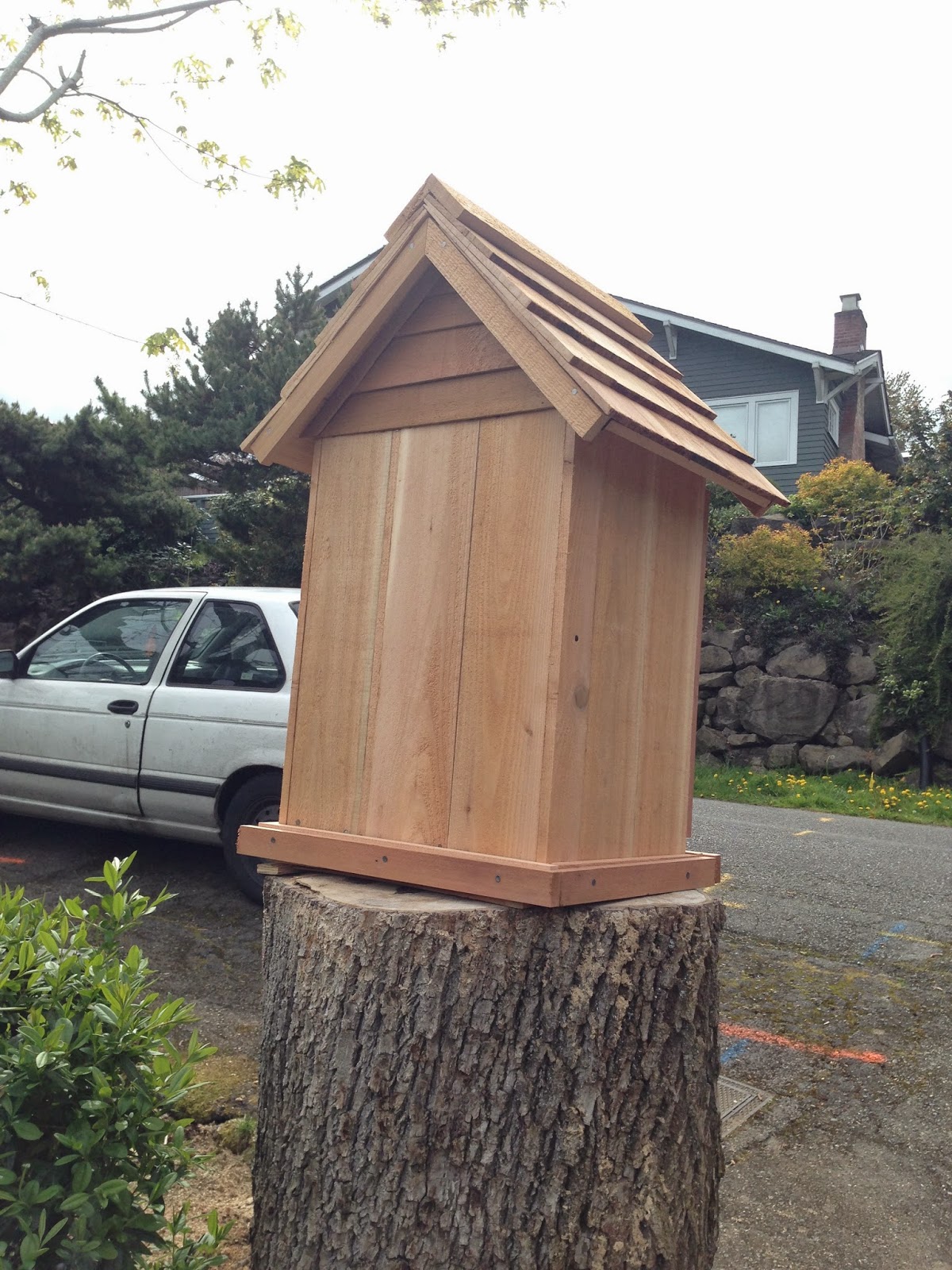 Mary is so proud of her Little Free Library...she just had to get a picture of me standing next to it!! HAHA.


Here is a close up of the sign that she had me make and with her first books in it!!


All in all I think this project cost a little under $200.00. It's all cedar, and wrapped in roofing paper to help protect it against the wet Pacific Northwest weather!

I enjoyed this project so much, and what makes me even happier is that I am always getting little updates from Mary! She has noticed such a change in her relationship with her neighbors because of this one little thing. I asked if she'd write up a little something that I could include in this post...and of course she said yes! Here's what Miss Mary had to say about what the Little Free Library has done for her neighborhood!


When my big maple was dying and needed to come down, I realized my dream of having a Little Free Library was coming closer with this ready-made base for the library.  Then, realizing I had no skills in this area, I began wondering who I could persuade to build one for me!  After watching Brian's photos of the original chicken coop on his blog, I sent him an email to see if he could be persuaded to give it a try.  Of course, generous soul he is, he said yes.  We met, looked at the stump, my house, talked some details - and he was off and running!  I was stunned with the quality and beauty of the library when Brian brought it over.  He anchored it, with his usual attention to detail, to the stump.  I emptied my bookshelves to get the library started.  I began to meet neighbors I had never known before as people began stopping to take books, leave books, admire the craftsmanship, ask if they could get Brian to build them a library!  Books of all kinds are coming and going on a steady basis.  Now, when people want directions to my house, I just say it's the house with the Little Free Library on the tree stump!
What a friend - thanks Brian for your generous heart and wicked talent.


It's funny to me that when I embark on a project I never really think about what the outcome will be, or the impact it will have. I just enjoy the process and making something that other people love and are excited about. I'm amazed at the positive response she's had to this, and I hope that it brings many more memories in the years to come! Thank you Mary for allowing me to be a part of this project! It was a pleasure building this for you!!

Until next time...Keep Cookin'!
Posted by The REAL Housewife of Snohomish County at 8:00 AM