No rest for this REAL Housewife!

Okay, so I've been back from Vancouver for quite some time and have neglected to blog. Shame on me! But I have to be 100 % honest, we've been SUPER busy! We finished our garden area!!! Let me tell you, this was a bigger project than both of us anticipated but we are very happy with the results!

I showed you a few weeks ago the progress, but I don't know that I really explained the extent of the work that had to be done. Over the course of a week, when we had time, Michael and I ripped up, loaded into the back of a rented pick up, drove to Cedar Grove Composting in Everett, and unloaded over 1 ton of sod! It's no wonder we were tired from it all! Both of our jaws dropped when we realized exactly how much sod we moved by ourselves! **Phew** Well two days after hauling off the sod we had Pacific Top-soil blow in 10 cubic yards of garden mulch. To give you an idea, they blew in about 8 inches worth of mulch to cover a 400 square foot area. Now we had the option to go a cheaper route and have them just dump 10 cubic yards of mulch in our driveway and then we could haul it via wheel barrow to the garden spot...but we wisely decided to spend the extra money to have the mulch blown in. This process took less than 30 minutes! And they even cleaned up the road when they didn't have to!

After getting the mulch blown in, Michael got to work planting the new garden! I'm not sure what's all planted but I think currently coming up we have radish, carrots, snap peas, beets, lettuce, potatoes and tomatoes. I also took over a corner and planted a big bush of rosemary and two each of parsley and dill! I can't wait to add more to the garden as the weeks go by! I also made yet another trip to the Home Depot to get cedar planting boxes to put on the edge of the rock wall between the yard and the garden to dress it up a bit. And then we headed off to The Plant Farm up in Smokey Point to get a ton of flowers!! :) So here are some pictures of all the work! :) 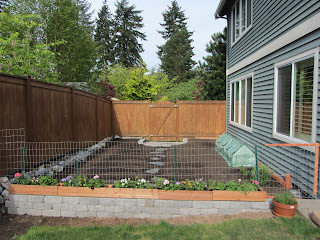 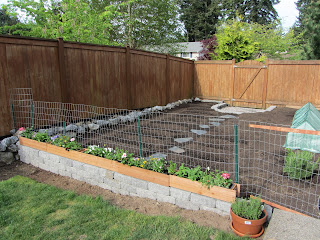 This whole project was QUITE the undertaking! My back is still sore from ripping up sod, hauling the rocks, bricks and gravel! But it was all totally worth it! I've been keeping myself busy most days out in the yard making sure everything stays watered and tended to.

But I've also undertaken a new project. I'm building our chicken coop/run. We luckily received our neighbour's blessings to get chickens so Michael put me in charge of all things "Chicken." :) So I went to work researching different coops/runs online and looking at ones in different stores around the area. But after all this research I decided to set off on my own and design my own coop/run and build it myself! I decided to make the run itself quite long, that way I can put a garden box on the roof of it. I'm super excited because I'll be able to plant more herbs in that box! :)

Now designing something is one thing, but building it is another thing! I purchased a circular saw and some saw horses from Home Depot. I also figured out how much lumber I needed and ordered it online so they'd have it all ready for me when I got there...I know...I know...kinda lazy. BUT it saved me oodles of time and I got all the right stuff! :) But after getting all the lumber home I realized that I don't really know that much. For instance, did you know that when you get a 2" x 2" x 8' piece of lumber it isn't actually 2" x 2"! WTF! So all my, what I thought were, accurate measurements and sketches were off! So this is where you learn how to just roll with things. :) It all works out in the end!

This morning I got up when Michael left for work, which was at around 6:15. I did a load of laundry, dusted the entire house, cleaned the kitchen, did the dishes and watered the garden all before 9:30 AM. We had a guy come this morning to give us an estimate on what it would cost to put in an over the range hood, as well as putting a cute picket fence between the garden and the yard and another fence/gate on the other end of the yard. Let me tell you after getting all my cleaning done I walked into the kitchen to get some water...and I still don't get tired of how pretty my kitchen is! 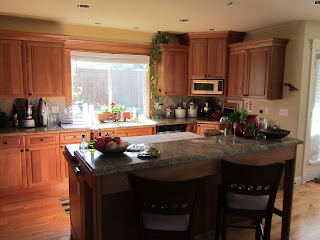 After the appointment, I had to run some errands. And after getting back to the house I decided to start framing the run portion of the coop! :) I'm quite impressed with myself, not to toot my own horn LOL. But it's been fun being out in the garage cutting the lumber and seeing my plans actually come together! I have the bottom almost completely framed out, but I'm trying to figure out how exactly I want to do the door.


So here I am, excited about the progress...and that I still have all my fingers ;-) And I need to do some clean up and get ready for tonight. We are headed out to go dancing! Woot! :) Tomorrow I'm headed to the other side of the water for some bonding time with my sister. :) Oh, and I suppose I should take back her carpet cleaner that I've had for MONTHS...**sheepish grin**

Well I'll update you over the weekend and give progress reports on the building of the coop! :) The sun is suppose to be out all weekend, and I can't WAIT! Have a great Friday and weekend everyone!!!
Posted by The REAL Housewife of Snohomish County at 4:32 PM