Okay. So I stole that title from the TV Guide Network's show about Wilson Phillips...but come on! It's too good not to! :) Well let's just say the last few days have been packed full of craziness and a little bit of down time thrown in the mix as well. But here we go!

The three little girls are growing up quite fast! It seems like every day the changes in them physically are quite dramatic. Miss Wendy has full on wings and her tail feathers look so dang cute it isn't even funny! Miss Carnie isn't far behind her. I don't really notice her wing feathers as much since her's are jet black! But she has her little tail feathers coming in as well. They are so stinking cute, they remind me of the tops of a dandelion when it goes to seed. They have the shaft of the feather with a little fluff sticking out at the top! So cute! And then there is Miss Chynna...she is like a day late and a dollar short! I am starting to worry about her getting picked on since she isn't like the others. Then I sit back and think...oh wait...we named her Chynna for a reason, just like the real person she is a bit behind when it comes to things. ;) Also, I've been doing some research and it seems that Columbian Wyandottes are slow to feather. So I have my fingers crossed that she catches up sooner rather than later!

We've had the girls out in the yard a few times letting them peck at the grass and flutter around. But today for the first time I put them inside the run of their coop for about 15 minutes. Those three girls got right to work at pecking and scratching the dirt looking for goodies. Too bad that every bug that was in there walked right past them and they didn't even see them! Hopefully they wise up and start catching those little critters! We are counting on them to keep the slugs and bugs out of our yard! I did get a little bit nervous today though, while they were safely locked in their run, there was a hawk flying overhead. I worried about the girls, then I realized that the hawk was probably eyeing Puck...which come on...that might be kind of funny to see Puck get into a tussle with a raptor! I'm just saying!

The last few days have been packed full of things though. I've been going to the grocery store, preparing/eating 5 meals a day for myself AND Michael for our Insanity program. Working out, which is not always the easiest thing! Tending to our ever-growing menagerie is also a bit time consuming! But through it all I still find time to clean the kitchen, vacuum the carpets and shower and get dressed! HA! :) Even though there are days that I can barely lift my arms up to wash my hair because of my workout! Holy hell!!!! But I digress!

Well I have a few pictures to share with you, I hope I'm not boring you with them at all! I love watching the girls as they mature and can NOT wait until they are able to be outside in their coop that I worked on! :) Oh! We introduced Puck and Cooper to the girls the other night. As expected...Cooper is scared of them...**shakes head in shame**. And Puck, well...he thinks EVERYTHING is food, so this should be interesting. As the girls get older I'm sure they can whoop up on Puck...and I'll be charging admission to that show! Anyways...enjoy the picks! And I'm going to try and get some cooking videos up soon, and maybe a "Housewife's Tips" video as well! Until next time!!! 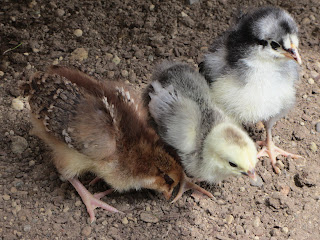 Posted by The REAL Housewife of Snohomish County at 6:14 PM