When Life Hands You Lemons...

You know the old saying that starts with..."When life hands you lemons," right? Well, do you ever find that when life hands them to you, instead of making lemonade you want to chuck them at the people that are pissing you off?

I've found lately that my fuse has been rather short. And it seems like each and every person is out to tick me off. Driving has become a bit of a cluster in its own right, and I notice that my reactions to other people's driving skills...or lack there of...is driving me insane! I'm starting to think that it's the heat that is wearing my tolerance thin. Let's be honest here...the Good Lord gave me body hair and a little extra poundage around the waist. Yes...I said it...He built me for cooler weather! Why deny it? :)

But the trouble isn't only when I leave the house. Here at home I've been struggling with things as well. Mainly there is unrest in the hen house. Over the past few months I've had a bully problem. And the culprit is... 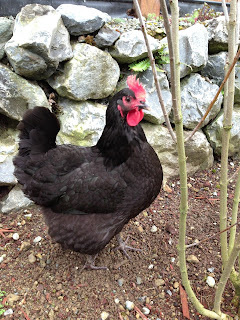 Carnie. Since the girls arrived here at BP Farms Bed & Breakfast as chicks, Carnie has asserted her dominance over the other two. But a few months ago she took it to another level. Miss Chynna has always been the hen on the bottom of the pecking order, and she knows her place. She's never tried to rock the boat or start a coup. But even with her rather docile and submissive nature, Carnie decided that she needed to pick on her. It got to a point where Chynna's comb and wing were bloodied from the continuous attacks. This sent me over the edge.

For the better part of two months, Carnie resided in the garage in a crate. On two separate occasions I reintroduced her to the hen house. Removing her for a week or longer is suppose to reset the pecking order. After the 2nd time it worked. Wendy assumed the position as HBIC, and quickly asserted that over Carnie. However, Chynna by nature, remained on the bottom. The attacks continued, and Carnie returned to her home in the garage. It was at this point that I realized I was almost at the end of my rope.

During this last stint in the garage I decided to add on to the Taj MahChicken. I figured that giving the girls more room could possibly alleviate the fighting. I also made the coop so I could lock one off into the addition if need be. Here are the pictures of the "transformation." 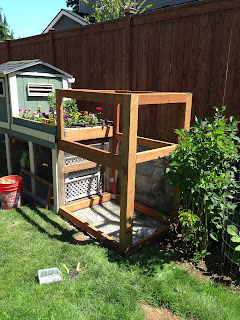 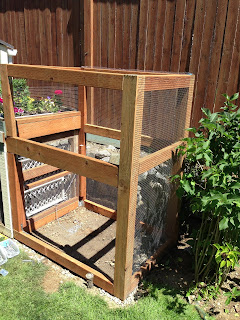 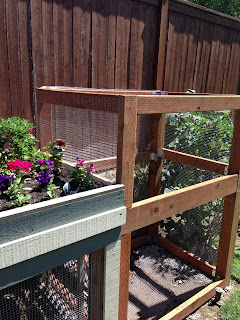 After the completion of the addition I added another twelve square feet of space to the existing run. The run is now eleven feet wide by three feet deep. The addition is also five feet tall.

Now I won't lie, having the addition has been great. It seemed to work a day or two, but Carnie began to corner Chynna and attack her again. Now it may be the heat, or it just might be that I'm fed up with dealing with a bully...but I finally decided that it's time for Carnie to find a new home.

Our neighbor's daughter has a LOVELY coop, and she lives about 20 minutes from us. I sent her a message asking if she wanted another hen. Much to my delight, she said she'd LOVE to take Carnie. Now she also has a rooster, and part of me secretly hopes that he whips the sh*t out of her and puts her in her place.

I won't lie, while I've raised Carnie since she was four days old...I'm not necessarily sad to see her leave. Over the past few months she has caused a ton of problems in the hen house. During the bullying, Chynna stopped laying, and in some sort of showing of support Wendy stopped laying as well! While having Carnie locked into the addition has worked, it isn't something that is sustainable. She deserves to be somewhere that she is included with the flock and has her place in the ranks. And that place is not here at BP Farms Bed & Breakfast.

I guess here is where the lemonade comes in! After coming to this decision, Michael and I talked and he asked if I was going to hatch some Lavender Orpintons. Now...lets be 100% honest...I've been wanting one of these hens for almost a year! So I went online, ordered an incubator and placed my order for 7 hatching eggs. So guess what?!? There will be another Chicken Adventure Page!! :) This time you'll join me on the journey of hatching the eggs as well as watching the chicks grow! Now before you think I'm just throwing Carnie out with the bath water...Michael did ask me if it had been a Lavender Orpington who was the bully would I have gotten rid of her. The answer, Yes! I don't care how much I love the hen, if she is causing more harm than good...she doesn't have a place here.

When I posted this latest update on my RHOSC Facebook Page, my friend Paula responded with a comment that literally made me howl with laughter.

"So, it's true: Some day somebody's gonna make you want to turn around and say goodbye."  ~Paula

I love Paula's ability to take a situation like this and somehow put a great spin on it. :) Come on...you laughed, right? You get the reference, right? :) If not...they are lyrics from a Wilson Phillips song! :) Thank you Paula! :)

Well, that's all the fun that has been happening here at the farm. Part of me is sad that this situation has come to this, but I have to do what is in the best interest of the entire hen house. Do I seem like a horrible person?

Well I'd better get going on dinner, afterwards we will be making the trip to take Carnie to her new home.

Posted by The REAL Housewife of Snohomish County at 5:57 PM