Canning! My days have been consumed by canning...lots of it! I think it was a bad idea for Michael to let me get the pressure canner! I bet he's thinking that he's going to come home one day from work and Puck and Cooper will be in big jars on the counter! But hey...if they hold still long enough, it just might happen! And then I wouldn't have dog hair all over my floors! :)

But in all seriousness, the last week or two have been all but taken over by the canning bug! I recently purchased the "Ball Complete Book of Home Preserving" and I've made 9 different things out of there and surprisingly they all turned out quite well! One of them I had to simmer the sauce more than it said, but that is knowledge that I had from making my own sauce before. :)

I started canning a few years ago and mainly canned jams and even some apple and pear butters. They seemed to work out quite well but it was quite a bit of work, so I didn't pick it up again until moving to our new home. Last year I had the bright idea of trying my hand at spicy pickles, tomato salsa, tomatillo salsa and even some pasta sauce! We flew through the pickles and the salsas, but I've been treating the pasta sauce like a precious commodity, and we still have 4 of the 10 quarts left! HA! :) But after this recent canning binge, I think it's time to use those up! :)

After purchasing the Ball book, I realized that I needed to get a pressure canner. Yes, I've heard all the horror stories of them blowing up (even my step-mom told me that Grandma Anne had one of hers blow up, so BE CAREFUL!). But things have changed a lot since pressure canners came on the scene. They have safety valves that will pop open before they would blow up, so I wasn't too concerned about them exploding. But that being said, I did do a "dry run" before I actually used it for the first time.(By dry run, I meant no jars in there...just water...don't freak out all you canners...I didn't just heat up an empty pot LOL) And what makes me feel even safer is that my neighbor, Geri, has done all sorts of canning in her days, and she is always willing to answer any questions I have. :)

So after doing days of research, I went to Michael with the pressure canner that I wanted. I laid out my plan, and why I decided on that one, and why I chose it over the others. Granted, I picked the one that was on the higher end of the price range, but we've found that in our quest to purchase things if we buy the cheapest one we can get...we always are disappointed with it and end up purchasing the one we should have gotten in the first place. Does that ever happen to you? Seriously, we've learned to suck it up, spend the extra money and get it right the FIRST time! So I settled on the All American 20 1/2 Quart Pressure Canner.

The great thing about pressure canners is that you can process things that have meat in them, which you CAN NOT DO in a hot water bath canner. I have to say this before I go any further. When canning, ALWAYS follow the recipes. And make sure these are recipes that have been tested, or come from a cook book like the one I referenced above. When you are canning, acidity levels have to be right, temperatures have to be right, and if using a pressure canner...the pounds of pressure need to be correct. Don't mess with botulism!

This year I decided to dabble in more things than in the past. I did my normal cookbook thing, thumbing through the pages and post it flagging all the recipes that I want to make! And let me tell you...there are a TON of things that I found I want to make. And granted, some of them are things that require a ton of effort, for just a few pint jars of reward! But anyone who does canning can attest to the following...I hate chopping, coring and peeling 900 pounds of tomatoes. But man I love opening up my pantry door and seeing all those jars of sauce or tomato products sitting on the shelf! :)

I was just talking to Michael about that statement this morning. He was quite shocked when I told him that I kind of hate all the work that I have to do to can this stuff. I could see the thought bubble above his head fill with the following..."Why did we spend all that money on that &$@%$##$$ canner if you hate all this!" But I talked him off the ledge by saying that normally chopping vegetables and preparing things for a meal is cathartic and satisfying because it's a relatively short process with an immediate pay off...dinner! But with canning anything with tomatoes it usually involved about 900 pounds of tomatoes that need to washed, peeled, cored and heaven only knows what else! So that becomes more of a means to an end. But all that labor is quickly forgotten when you walk into your pantry and see this... 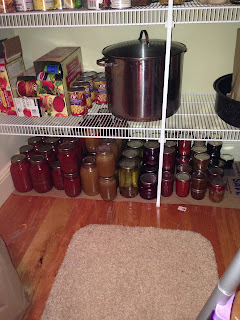 All those LOVELY jars of homemade sauces and other things in the pantry! I've found myself over the past few days opening up the door and just staring at the ever growing bounty that is taking up the floor space! Why is it all on the floor? Because those flimsy shelves will NOT support the weight of all my jars! HA! That is a project that I'll tackle one day soon...putting REAL shelves in the pantry! But until then, my wonderful canning rewards will take their place on the floor!

Today I lined up all the jars on the counter to take a picture of everything that I've made this year to date. I was kind of shocked to see it all out! Here is the list: 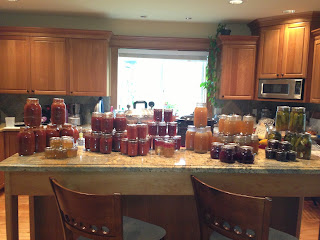 **Phew** Okay...when I lined them up on the counter I realized there was a LOT of work put into making/canning all of those items. But when I put them back into the pantry, before turning off the light...I turned around...looked down and smiled. :) Canning is a TON of work, yes...but there is something satisfying about popping open a can of sauce and making dinner. And even more satisfaction from hearing someone say..."Wow! This is delicious!" :)

Until next time...Keep Cooking! (Or Canning!!!)
Posted by The REAL Housewife of Snohomish County at 10:30 AM