Packing up and Heading Out - France Vacation -- Day 1 - Travel

Well...by the time this posts I will be in the air on my way to France. It's crazy to think that just a few days ago my kitchen was full of wonderful smells of Thanksgiving...and Michael's parents joined us for dinner. And tomorrow (well today...when you are reading this) we'll be on our way to Europe.

Michael and I traveled to London and Paris a few years ago on a whirlwind trip. We spent two nights in London and four nights in Paris. I've always said that Paris and I shared a brief love affair, and I'd be lying if I said my mind hasn't often wandered to thoughts of her since.

We got over 3 inches of snow on Friday night, and I woke up to this beautiful scene. I also woke up to the netting over the top of my run collapsed from the weight of the snow, so I spent a good deal of time Saturday morning brushing snow off the netting and attempting to once again give the chickens a place to spend their day. Speaking of the chickens...they wanted NOTHING to do with the snow. For all but two of them, Chynna and Wendy, this is the first time they have experienced snow. So, like the good Chicken Momma that I am...I tossed each and every one of their feathered behinds out the chicken door and into the snow. Now I won't lie...if you were anywhere near my coop you would have thought I was murdering each and every one of them. I was cussing and swearing while chasing them...and they were squawking and shrieking as if I had an axe in hand. After about 20 minutes of this colorful display, I managed to get them all out into the run. Of course Miss Babs, the buff cochin, had to jump up onto one of the window boxes...so I went into the run and "lovingly" shooed her off. Well she flew...as best she could with all that weight, to the middle of the run. And that is where she stayed for the better part of 45 minutes. I looked out the window as everyone else was huddled in what was left of the bare ground under the window boxes...and poor Miss Babs just stood in the same spot...afraid to move. She did alternate feet, pulling one up into the feathers to get warm. 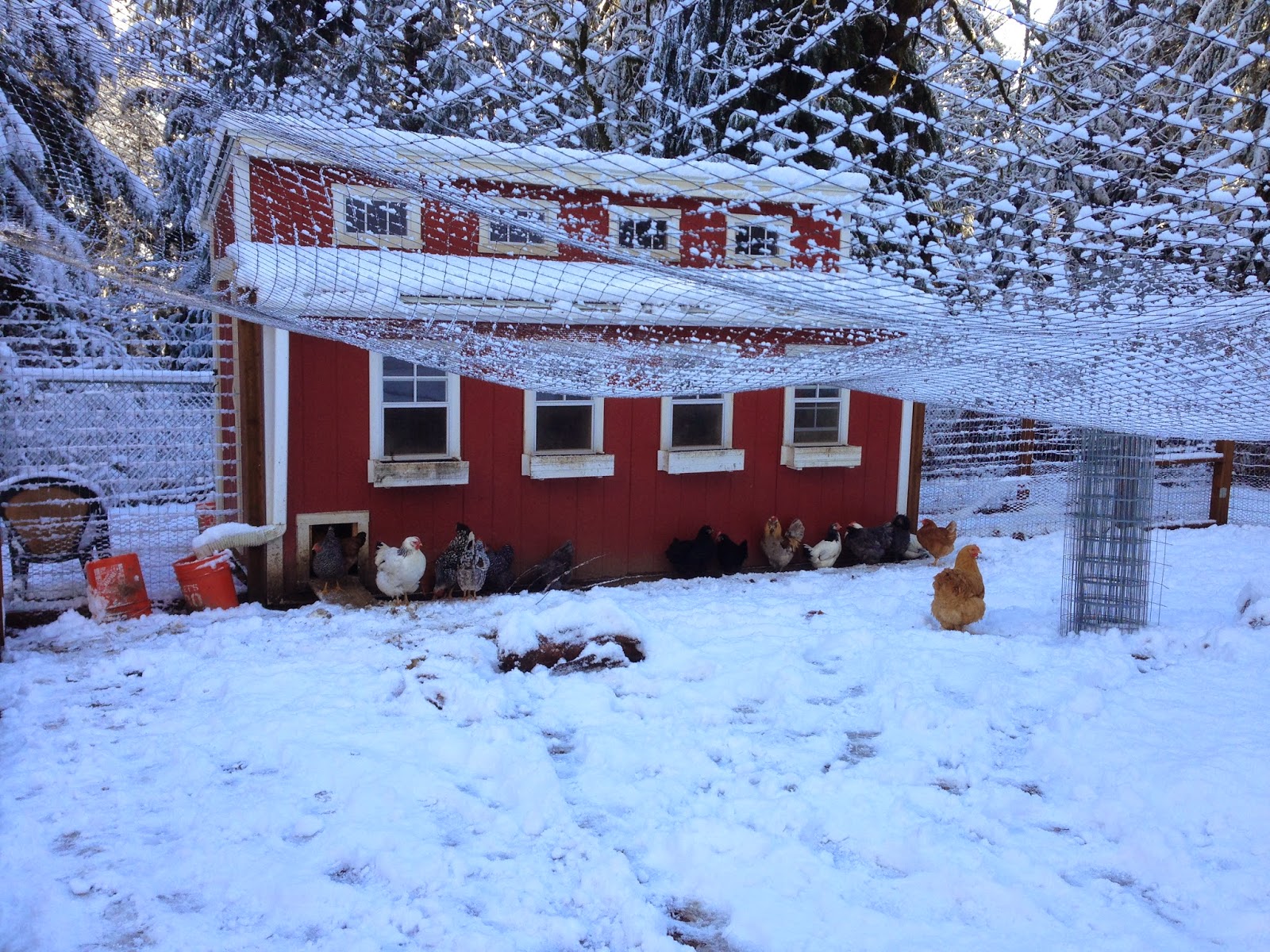 Well, I'm happy to say that even though they had to be tossed out into it...they are no longer afraid of that white stuff. Since that morning they've been out and about in the run as if they grew up in the snow. Tough love...it's what everyone needs at some point in their lives...right? Well that's what I tell myself.

I've been fairly absent from my blog for the last few months...and it's not that I haven't had much to share. I've been fairly busy preparing the farm for winter...blowing leaves, raking leaves, hauling leave, blowing leaves, raking leaves, hauling leaves. Did I mention that we have about a million big leaf maple trees in our yard. ;-) But I have to say I wouldn't trade a minute of it because I absolutely love living here. This move has proved to be one that has brought us a lot of back breaking work...but also a lot of joy. Stepping out each morning onto the deck and looking at the chicken coop...looking at the trees and seeing Mount Pilchuck peeking between the hemlocks...it makes all the work worth it.

Today (yesterday for you lol) I was busy around the house getting things crossed off my To Do List. It seemed that whenever I started something...something would come up. Michael had to work this morning so I was up at 6 making his breakfast and lunch so he could start his day. Then I had to go down to the coop and fix the chicken door. I'm not sure if the door froze shut and when it tried to open it snapped the string that pulls the door up and lowers it. So at 6:30 this morning I was in the coop with my trusty drill taking off the door cover and fixing it. I'm proud to say that since I built the thing I'm pretty handy at fixing it! :) It's working now...and hopefully it continues to while we are gone.

But the rest of the day I spent running upstairs, doing laundry, doing dishes, doing more laundry, packing, hauling wood pellets, salting the driveway, cleaning the chicken coop, cleaning the rabbit cages, filling water buckets and feeders...but I didn't have to blow/rake/haul any leaves! :) So that is a good thing! But all day Cooper has turned into the most pathetic dog ever. Whenever he senses that we are going on a trip he becomes really clingy and gets all "hang dog." It becomes increasingly harder as the day wears on to get anything done because he seems to be underfoot. And when I tell him to go get on his bed he gives me the saddest looks as if I've just told him that I'm taking him back to PAWS. Truth be told he'd love to go back to PAWS...they gave him hot dogs there. LOL.

Puck on the other hand is oblivious. The only thing he cares about is 1) Food 2) Warmth 3) Michael. And usually 2 & 3 are one in the same for him. But I did move their bed in front of the pellet stove so that seemed to make Cooper happy for a little bit. At least that's the way it appears... 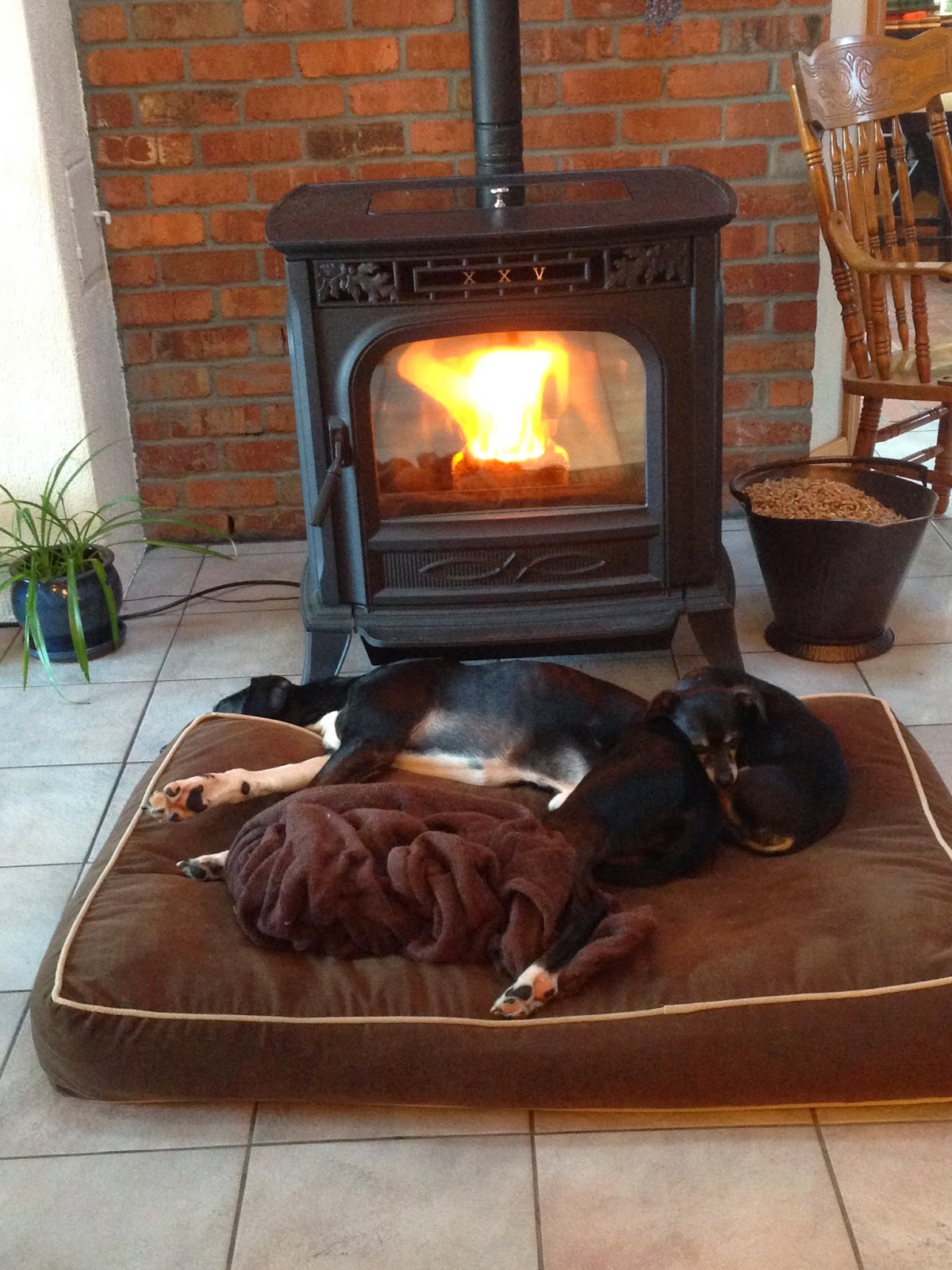 Well I suppose I should get to bed...it won't be long before the alarm clock goes off and I'll be up trying to complete all my morning chores before heading to the airport. Just know that while you are reading this...I'll be crammed into my seat for the 10 hour, non-stop, flight to Paris. Rough, eh?

I can't help but think back to last Thursday though, it was so nice to be able to share another holiday with family. During this holiday season it's hard not to think about how truly blessed Michael and I are. We have a wonderful home and piece of property...two somewhat well behaved dogs, wonderful family and our health. And we are afforded the opportunities to travel. During this holiday season take the time to think about what you are thankful for. And when you are setting your tables for the meals you will share...be grateful for all you have. 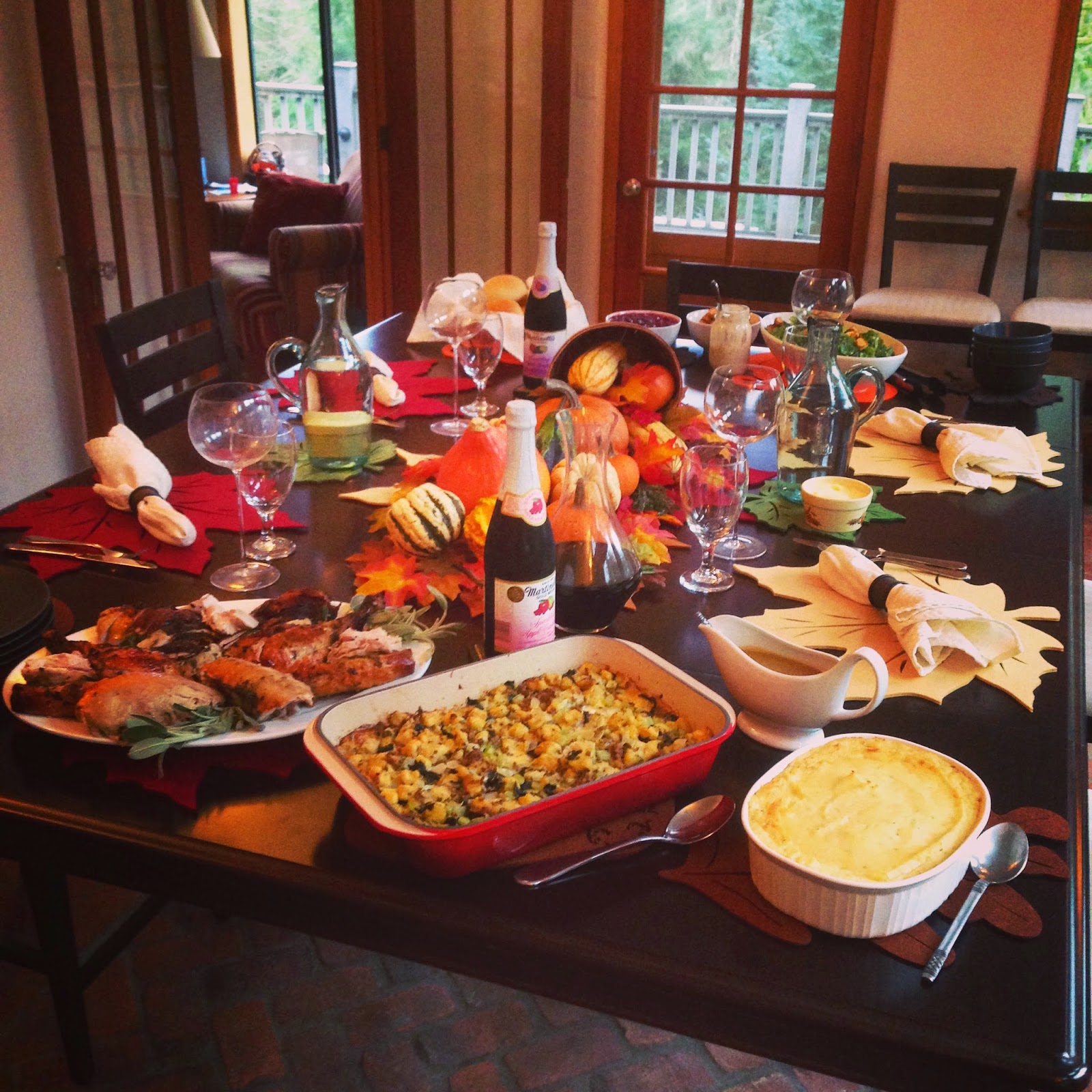 
**Just a note...Paris is 9 hours ahead of Seattle so I'll be posting blogs at the end of each day (Paris time) so they'll be shared mid day back here in the U.S. :)

Posted by The REAL Housewife of Snohomish County at 11:30 AM