I’m currently sitting on the plane somewhere between Philly and Seattle, and not in the best frame of mind. I wasn’t too excited to leave Paris 10 or so hours ago, and I sure wasn’t excited to get on this Airbus 312 in Philly.
I think there are around 300 babies on this flight and they are all seated around me. To make things even better, after boarding, the plane sat at the gate for over an hour while they “fixed a part.” The flight attendants were nowhere to be found, probably hiding so they didn’t have to answer questions or take care of the people they are paid to tend to. **Sorry to my flight attendant friends, but come on…it’s not like I can hide from housework! Lol**

But let’s get to the meat of this blog post! The past week was full of so many wonderful and amazing sights, sounds, eats and experiences! It was such a whirlwind of a trip so it’s hard to believe that it’s already over! I’ve tried to keep my blog posts relatively short the past week, but it was hard because there were SO many things that happened and I would always find myself going, “Ahhhh, SHIT!” after I posted the blog because I forgot to add something. So I decided to do a little “Housewife Highlights” of things I missed for all you faithful readers! :) I’ve also got a few pictures to add!

In London we made a point to go up into the Eye of London. We were lucky enough to get our obligatory tourist photo there where we were in front of a green screen. And much to my delight there was a photo opp on the way down. We shared the capsule with three funky dressed Filipino boys and a family of some sort of north African decent I would venture to guess. The father was on the cell phone the ENTIRE time, and it was reminiscent of many taxi rides in Seattle. Oy! Now when it came time for the photo to be taken, Mike and I stood in the spot…and this family stood next to us! So our photo was us and some random African family. Clearly, I opted out of purchasing this photo. Fail! LOL

Our other London highlight was the first day there when we waited outside Buckingham Palace to see what all the commotion was about. The police were herding people here and there and there were dogs and firemen. We were SURE the Queen was coming outside or something. And after about ½ hour of waiting, the Royal Mail car shows up! We couldn’t stop laughing. I’m sure the Queen was looking out her window laughing at the crazy tourists!

Paris seemed to be the hub of all highlights! :) While we were at Notre Dame, we were walking up past the high alter and some random old Asian guy was talking rather loudly, and one of the priests yelled, “Silence!” And when the guy didn’t stop talking the priest yelled, “Shut UP, STUPID!” The first thing that when through my mind was, “Jesus would NOT have done that!” The best part of this is the guy STILL didn’t stop talking loud until people around him quieted him. I could only imagine what expletives the priest would have started yelling if he hadn’t stopped! I bet he’d a had to go to confession for that!
Now I’m not trying to be racist, but I have a serious question. Are there any Asians in Asia? I think they were ALL in Paris for a four day holiday! OMG! And the most annoying thing about it all was that I have a ton of photos that were photo-bombed by oblivious Asians. So Mike and I took up photo-bombing as many Asians as we possibly could, minus the peace signs. It became a bit of a game, and made for great time passing! I wonder how many people will get home and go, who is THAT?!? And why is he smiling at my camera??? All is fair in travel and photography! HA!
We’ve decided that France was closed for most of our trip. Now let me explain this comment. Everywhere we went, we ran into things that were closed. Let me list some of them:
- Laduree, a restaurant we were recommended was closed for renovations.
- Maille, a mustard place that Mike’s sister gave us a crock to refill was closed for the “holiday”
- Restaurant at Chateau de Versailles, after picking out food on their outside menu, the doors were locked!
- Oscar Wilde’s head stone, was covered with tarps because it was being repaired
- Ticket office on the 2nd level of Tour Eiffel for tix to top. Fail! LOL
- Musee Rodin, we missed it by 5 minutes the day we walked by!
- Grocery store near our hotel, closes at 7 pm…um…REALLY? No wine for us that night!
- Many shops were closed on Friday because it was a Bank Holiday. We still aren’t sure what holiday it was.
We laughed every time we came across something that was closed, and decided that it was just another thing to add to our list. :)

Here are some pictures from throughout the trip that I didn't post before... 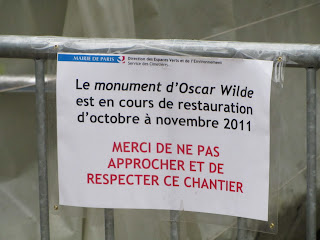 Even thought these highlights weren’t what people would call “happy highlights,” they were all things that made up this amazing trip! Mike and I had so much fun on this trip, yet we were reminded how age is taking it’s toll on our bodies! Mike’s knee hurt a lot during the trip. My lower back hurt a bit after long days of walking. Let’s not forget about Philippe, which helping him to say goodbye with a pin prick was a MAJOR bust…there was nothing in there! **sigh** We crawled into bed most nights during this trip and let out huge sighs, and then laughed at each other’s aches and pains. I love having someone that I can laugh with and grow old with…even if we are only 31!

While London seemed like a very “Young Persons” city, I felt like Paris was a great mix and that we saw more of the older crowd. Last night at dinner we sat next to an older couple and the mother of one of them, I’d say she was in her 70s. I couldn’t help but look at her and smile, she was so cute sipping on her wine. I happened to look over at her and we made eye contact just as she was taking a bite of bread. I smiled at her, and with the thick bread crust hanging out of her mouth, she smiled back at me. I still chuckle a bit thinking about that hunk of bread hanging out of her mouth.

Leaving Paris was bittersweet today. On one hand I didn’t want to leave this city that I’d had a brief love affair with. Yet I miss our dogs, our home, my bed. But in all honesty, I could get new dogs, a new home, and an even better bed in Paris! Just kidding….kinda. ;-) I honestly couldn’t have asked for a better first experience of Europe. I can’t wait for my next trip, and I hope that our travels take us back to Paris because there is still so much she wants to show me. I hope you’ve enjoyed my travels through London and Paris!!! But one thing rings true….being The REAL Housewife of Snohomish County is HARD work, thank god for fainting couches! :) 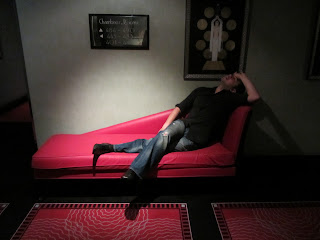 Posted by The REAL Housewife of Snohomish County at 6:00 PM