Well I've not been any better about blogging! I'm putting myself in a time out! The good thing about the time outs here at the The Real Housewife of Snohomish County's abode is that bacardi and coke is allowed! :) YAY! Sounds like I'll be in a long time out...or is that pass out. Either way...I'll be out!
So we've had a busy week or so, yet again. Michael has been working some crazy hours and I've been busy getting the house ready for Christmas. This year for Christmas, Mike's parents will be joining us...and I'm not going to lie...I'm a bit nervous to cook for the in-laws! I was excited when I saw Anne Burrell's holiday menu, Pork Crown Roast with Pear and Chestnut Stuffing. So I set my sights on this monster of a meal! But when it comes to a meal as important as this one, I've learned that I should always do a practice run.

So yesterday I spent a good part of the afternoon preparing the 13 rib pork roast (that I had the butcher french)...I had to do a bit more trimming to get it right, but then I covered it with an herb paste (minced garlic, sage, rosemary and olive oil) and tied it into the "crown" shape to go in the oven. Then put some of the stuffing on top of it. I've not had much luck with pork loin in the past so this was a bit nerve wracking. But after 3+ hours in the oven, the roast came out and looked DIVINE! And the stuffing came together quite nicely!

We had two of our friends over for dinner, it was our turn to have them over since they had us over about 6 months ago! ha ha ha...boy were we behind schedule. I told them what I was making, but said, be prepared for pizza! :) I also make some kale that I sliced up and let marinate in champagne vinegar and olive oil. The dinner turned out amazing!

Mike and I aren't big entertainers, which is shocking considering everyone thinks gays LOVE to throw a party. The dogs were super excited since we were finally having company that would pay attention to them. It was quite a lovely evening, we shared a great meal, some good wine and lots of laughs and stories. To me, this is what a meal is all about; sharing food and laughs with people that you love. I feel incredibly lucky to have the life that I've been afforded.

Today I made my way down to Renton for breakfast with friends who are here from Hawaii. They adopted their second child, and WHAT a cutie he is! For only being a few weeks old he had his eyes wide open was so alert. He's such a lucky boy, he has been blessed with an amazing mother and father who love him and an older brother who will just adore him! It was so nice to catch up with them, since I haven't been back to Hawaii in a year and a half, this was a way of the islands coming to me!

After a lovely breakfast I drove back up north in the rain and stopped at the butchery to place the order for my Christmas Pork Crown Roast! I am super excited to make this again, and can't wait to hear what the in-laws think! This afternoon has been a bit of a lazy day around the house. I've decided that this housewife deserves a rest. So I poured a bacardi and coke in my "Big Girl" glass and settled in to watch some TV. The boys were up to their normal lounging by the fireplace. 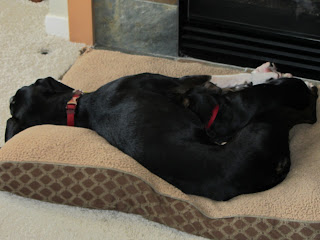 The boys are so cute, when they are sleeping! I love when they are out of my hair and just crashed like this. But all this will come to an end when Mike gets home and they hear the garage door. Then all hell will break loose! :)

So as dog owners, we are afforded the right to punish our dogs for their bad behavior. Now there are some people who hit their dogs, or take away their toys as a form of punishment...or even make them go into their kennel as a time out. However, I am a firm believe in the fact that the ONLY way to punish a dog...is to embarrass them. And I practice this punishment as often as it is required, mainly because we embarrass them in ways that make us both laugh...for instance...the boys were wanting to participate in the Christmas festivities...but they didn't know I had this in mind... 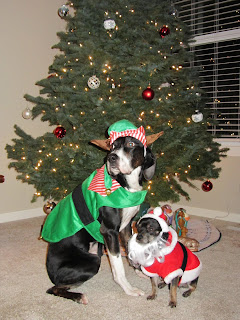 So, let me tell you, these pictures have provided me with MANY smiles and laughs and every time they are acting up I just have to pull out their costumes and Cooper goes to his bed and sits down! :) I'm so happy to know that I've found a punishment that works, because let me tell you...I WILL take them out in public like this!

Well, tonight I've decided to take a culinary break. We are having frozen pizza and salad for dinner...and wine! :) I figure that if God even had a day of rest...that I deserve one too! So until the next post...enjoy the pictures and have a drink to celebrate the holidays!
Posted by The REAL Housewife of Snohomish County at 5:42 PM