Okay, so I have to say that Christmas is one of my favorite times of the year. And no I'm not singing another song! I really do love Christmas, but not because of gifts...to be totally honest getting gifts at any time of the year makes me uncomfortable. I'm not a good gift buyer so I get awkward when I get a gift because I know that I'll never be able to return such a good gift. This year as gifts for my friends I decided to make and send them Apple Butter, Pear Butter, Jalapeno Jelly and Kiwi Jam.

Now the other thing I need to say is this...man I've been a BAD blogger lately. And it's honestly not for lack of things to talk about! Things have been rather busy in the life of this Housewife!! For the last week and a half I worked on a gingerbread house for The Healing Center's Holiday Potluck. I started out with a pile of Build a Bear boxes and boxes of graham crackers and wheat thins. I was told to make a fabulous house for the kids to decorate during the party. So I dug down deep and summoned my inner lesbian...(almost built a deck for the house!) and came up with something that I was in all honesty...proud of! I took some pictures along the way... 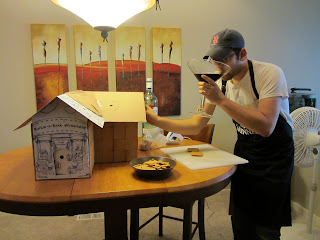 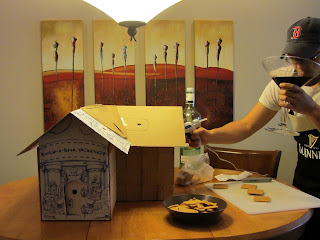 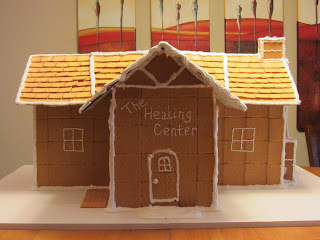 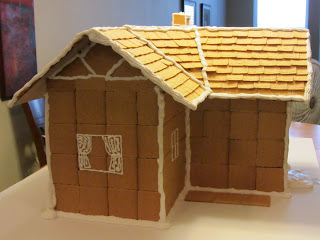 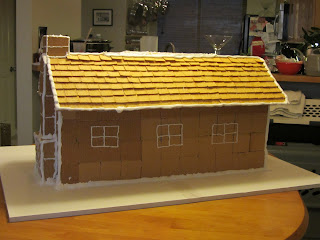 I hot glued EVERYTHING on this house! The roof took forever! I had to design the roof and figure out how to put the front addition on it and make the roof work...somehow, someway...I did it! After finishing this I had a bit of a panic attack wondering if I was going to be able to get it out the front door! Thankfully it made it out the door and safely arrived at The Healing Center! I'm not sure what the kids thought of it or anyone else for that matter. But I was so happy with the outcome! :)

My mother was up visiting last week and Michael and I picked her up from the airport. My boss gave her a tour of The Healing Center, and my mom (like everyone else who gets a tour) left with the feeling of wanting to give someway to this organization that makes a difference in people's lives. That is one of the things that I love the most about The Healing Center is that you walk away with a feeling of wanting to give or do more. I love it, and it's so rewarding.

My mom stayed with Alyssa and the kids and got in some much needed Grammie/Grandkid time. She came back to Mukilteo and stayed with us the night before she flew out. Every time she travels here it gets harder and harder for her to leave her grandkids. I would love to say that she is sad to leave me, but we all know she's coming here for those little rug rats! And I don't blame her. :)

I've also spent a fair amount of time in the kitchen. I made and canned 20+ jars of Apple Butter, which made our house smell YUMMY for days as it was simmering away in the crock pot! And I also tried a new recipe from Ina Garten. I made an oven roasted pork loin with a mustard/garlic glaze that I roasted over a bed of fennel, onions, carrots and potatoes. I have to say this meal turned out SO good! I was surprised because some of the things I make don't always come out good the first time. So there you have it, I admitted that I'm not perfect! :) I always love trying to figure out how to repurpose leftovers, because I don't like to eat the same thing day after day. 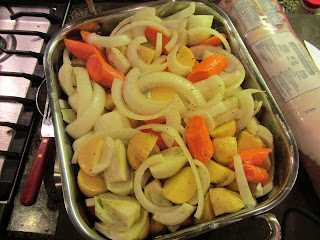 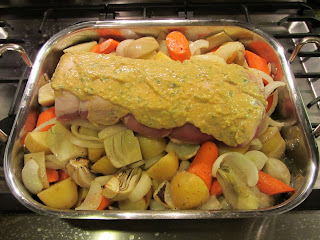 The other night Michael had to work from 7 pm to 7 am, and I told him I'd bring him dinner. So I sliced the pork and made a stone ground mustard sauce and simmered the sliced pork in it. Then I took the roasted veggies and ran them through Laquisha (my food processor) mixed in some crushed red pepper and some chickpea flour and then formed them into little falafel shapes and fried them lightly in a touch of peanut oil. Okay, now let me say this...I thought it was a touch too salty, but Mike loved it! That is what makes it all worth it, having the people you are cooking for love your meal. His coworkers always make comments like, "I wish I had a Brian at home!" Those are the things that make me smile!

I'm so happy that it's getting closer to Christmas! Michael and I went out to find a tree yesterday and came home with a great 7 foot Noble fir! And I was so excited to get it all set up and get the lights on it and the Nativity set that my Grandma Edie hand painted under it! Today we went shopping for some other things and found some CUTE stockings for Cooper and Puck! So we came home to put those up and decorate the mantle. I can't even begin to tell you how good it smells in here! Nothing compares to the smell of a real tree! I'm almost sad for Christmas to come and go because I don't want to get rid of the tree. 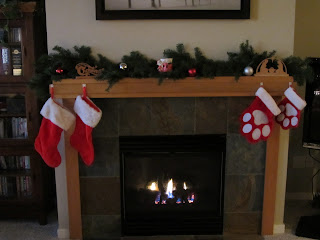 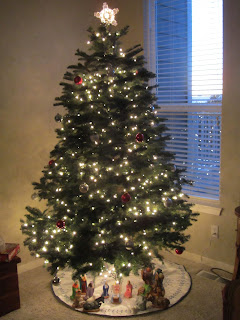 I'm trying to figure out what I want to make for Christmas Dinner, Mike's parents are coming over to celebrate. I think I'm going to attempt a Pork Crown Roast with Fennel, Pear and Chestnut stuffing. And to go along side it some roasted haricot vert, oyster mushrooms and kubota squash. But I think I'll attempt this sometime this week to make sure I don't flop our Christmas dinner!!! That would NOT be a good thing. This is the first meal I'll be cooking for my in laws...and I don't want them to have to fake enjoyment of my meal. :)

I can't believe that it's already the middle of December. This year has flown by! Pretty soon I'll be making New Year's Resolutions that I'll break within two weeks of making them! But hey...isn't that what New Years is for?? Well I want to apologize for my lack of blogging lately, I really need to get back into habit of ranting and raving on here, I know there are a TON of you who can't stand not hearing about my ever so exciting life! :) Until next time...
Posted by The REAL Housewife of Snohomish County at 5:29 PM