Okay...so here it is. We decided on names for our girls. It was the other day and Michael and I were out in the backyard since the sun was out (a rare N.W. moment ;-) ), so we decided to take the chicks outside for their first romp in the grass. It was at that moment that Michael came up with the names for our three newest members of the BP Clan.

So I'm proud to introduce the following ladies to you...

So let's introduce them one by one... 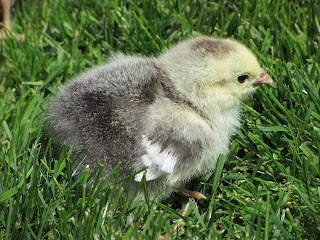 Next we have Wendy. Now this girl is a bit odd. She is very independent and always the worry wart. She is always looking around to make sure nothing or no one is about to give her any troubles. When we stick our hand in the brooder box she runs the opposite way. She does prefer to be cuddled close to your chest...then she'll hush up. But she doesn't like to be handled too much. She walks all over everyone when they are at the feeder mainly because she just seems so unaware of everything around her. Sounds a LOT like Cooper! LOL! Here's Wendy! 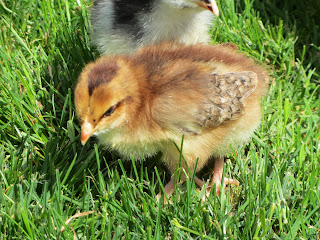 And rounding out (pun intended) the bunch is our girl Carnie. Now...like the real Carnie Wilson...this girl will eat anything you put in front of her face! She is round, robust, large and in charge! Carnie is hilarious! She will always be the first one to come up to you if you put your hand in the brooder box. While they are out in the yard she will walk around pecking and scratching but promptly return to us to see if we have any treats in our hands. But unlike the real Carnie...this girl will NOT be getting Gastric bypass! We want her large and poppin' out the eggs! Here's Carnie...careful she might try to eat you through the screen! 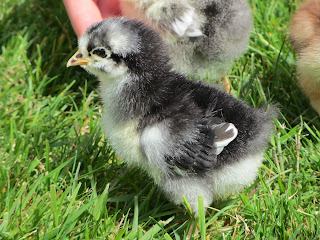 It's been great having these three girls here. They have such different personalities, which seems weird because they are CHICKENS! But honestly, I can't believe how different they are. We always crack up whenever we are out in the garage with them or in the yard. Chynna cracks us up the most. She can go from preening her fluff to sleeping in a matter of seconds.


It's amazing how quickly she goes from fully alert to fully sedated! Standing up, lying down..it doesn't matter what position she is in she'll fall asleep.

The chicks are about a week and a half old and it's amazing to see how quickly they change, physically. Their feathers are all starting to come in, well all except Chynna's. We wonder if she was a late hatcher or if she is just going to develop slower than the other two. Mike jokingly said tonight...she's our charity case, she won't produce any eggs. She's just here for the food. :) Hopefully the other girls pick up her slack! :) Ha ha!

Well, not much else has been going on around this joint. Well except INSANITY! Holy hell. Week two isn't really any easier. Although I'm happy to say that I've dropped 4.5 pounds since I started last Monday. While the work outs are a ton of work, eating 5 times a day is HARDER! When Michael has to work I get up at around 6 AM to prepare 4 of his 5 meals to take with him and then I drink my protein smoothie and do my work out. I feel blessed right now though. He's been off work the past few days so we've been able to sleep in a bit and it isn't such a rush in the morning to get all the meals put together and packed up. We've been eating healthy food and Mike enjoys that. But I miss a few things...for example

Oh heavens...the list goes on and on! I have recipe books FULL of foods I miss! But I have to say that I've been sleeping a little bit better and seem to have more energy! So this whole Insanity thing is working out fairly well.

Well it's bed time! I have Cardio Recovery tomorrow! YAY! We are going to check out the King Tut exhibit at the Pacific Science Center tomorrow. Hopefully it's good! :) Have a great Hump Day tomorrow!!!
Posted by The REAL Housewife of Snohomish County at 11:43 PM