Yesterday I left the house as a partner in a corporation...

And I returned a lawfully wedded man! :) It's finally happened! As my friend toasted to Michael at dinner last night, "To Michael...for making an honest man out of Brian...didn't think it'd ever happen!" Of course we all laughed heartily after his toast and merrily drank our champagne!

Wow...what a whirlwind the last few days have been. We've been busy with changing cable providers (YAY Frontier FiOS!!! booooo Comcast!). And then just preparing for the arrival of our new furniture. And to top it all off, yesterday was the final day of our 9 day cleanse. I believe you've all heard about me and my cleanses before. You know...the one where I turn into a raging bully for 9 days until I'm allowed to eat real food again! Well this time Michael decided to join me in cleansing. Why you ask? Well I didn't want to look like a stuffed sausage in my suit for our pending nuptials!

During the cleanse I made some rather yummy food. Things that I had to create on the fly since Michael was doing this with me, and he was hungrier than I was! One of our favorites was this stuffed pepper recipe. 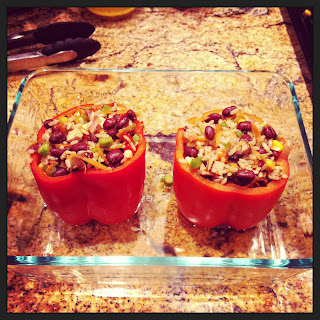 Very simple to make in all honesty! I just took two bell peppers (any color) cut the tops off, and removed the seeds and white membranes. Then I boiled them in salted water for 10 minutes to aid in the cooking process. But before I did that I had everything else ready. You can honestly put whatever you want in them (including meat...but we couldn't during the cleanse). But I did the following:


- Cook brown rice (in a rice cooker or on the stove) in some sort of stock. I simmer mine in either Chicken Stock or Beef Broth, but you could use vegetable broth
- In a pan saute in this order:

- Chopped Onion
- Chopped Bell Peppers (any color...I mix them)
- Jalapeno (optional) seeded or not (if you like it spicy use more than one)
- Corn (either frozen or I buy a cob and just cut it off the cob)
- Peas (frozen)
- Carrot, shredded on a box grater
- Couple cloves of minced garlic
After these are soft and smelling so yummy that you want to eat them then and there, add:
- 1 can of black beans, rinsed (or any kind of bean, or chickpea)
Mix that all together and add the cooked rice. The rice is a "filler" of sorts so use as much or as little as you'd like. Then spoon this mixture into the bell peppers, make sure to "heap" it as it will condense a little while cooking in the oven. Then put them into a baking dish. **Note** If for some reason your bell peppers don't stand up straight on their own, utilize the top piece that you removed to fashion a base of sorts for it to sit on in the dish.

Then poor a couple of table spoons of white wine and chicken stock (or other stock you have on hand) into the dish.  Cover with tinfoil, and pop into a preheated oven (350 degrees) for 25 minutes. Because you parboiled the peppers it won't take as long to cook.

More than likely you'll have the rice mixture left over, so spoon a little bit onto the plate or bowl you'll be using and nestle the cooked pepper into it (it holds it up!). Then eat and enjoy!

Now it goes without saying that this is just what I used. You can use any veggies you like, or even add meat and cheese before you stuffed the pepper. Be creative! The best part of cooking is taking a recipe and adding your little touches to it! Now if you add meat to this, like ground beef, I would brown the meat before putting it in the pepper because this will save on the cooking time in the oven. Man I want another one of these right now!!!

How's that for a recipe, since it's been AGES since you've seen me blog about the food I'm creating in my kitchen! Every day that I walk into my kitchen and put on my apron I can't wait for whatever ideas I have come to fruition in the form of a meal. So exciting to me!!

Well yesterday was quite the day, I don't even know if I can begin to explain it. My therapist asked me, "What do you feel when you think about how much Mike loves you?" I smiled...and I said, "I get this tingly feeling all over my skin...and it just feels warm." She smiled and said, "That's the feeling I want you to carry with you all day." And I did. While I was getting ready to head to town for our ceremony in front of the judge, I kept looking in the mirror and smiling. The whole thing felt surreal.

I could not have asked for anything better than how yesterday turned out. We each chose an amazing friend to stand up for us as our witnesses, and my friend's husband took pictures for us! And I can't wait to see them!!! The judge was extremely nice and congratulated us all the while treating us like we were the only two people who ever mattered.

Afterwards we treated our friends to a wonderful dinner at Daniel's Broiler. We shared a bottle of champagne, and two bottles of red wine from The Ledson Winery in Sonoma, where we are members of their wine club. There were a plethora of appetizers and the entrees left NOTHING to be desired. Over the course of a few hours we laughed, told stories and just enjoyed each other's company.

On the ride home I unbuttoned everything that could be unbutton without being fully undressed! :) I was so full from all the food and all I wanted to do was get home and plop down onto the couch. Which is exactly what we did. We sat on the couch with Cooper snuggled between us, and Puck lying on his back in Michael's arms. A family. We were always a family before, but now we are legally a family in the state of Washington. Hopefully soon we will be recognized as one across the entire country. But we'll take this for now!

This morning I woke up and made our first breakfast as a married couple...Sour Cream & Chives/Tarragon/Thyme and Parmesan Cheese Waffles with Chokecherry Syrup and some bacon! 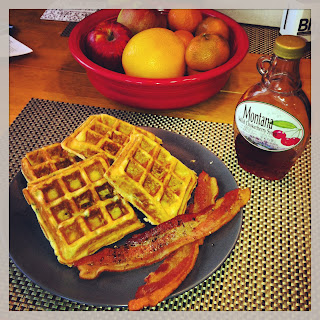 I could get used to this sort of thing! :) And so could Michael! ha!

Posted by The REAL Housewife of Snohomish County at 1:09 PM