Hectic Days at "the farm"

If you've ever spent any time in the Pacific North West you know that when the sun come outs...you hurry the hell up and get all of your yard work done. Because you know that if you don't...it's going to rain the very next day! And that, my dear readers, is what I've been doing the past few days. And because of that not only has my blogging taken a back seat...but my housework has as well!

Today I was afforded a bit of "down time," for lack of a better term. And I feel like it was well deserved after all the work that has been accomplished over the past few days. A few days ago I attempted to "trim" a large pine tree on the west side of our house...and let me be the first to say this...I'm NOT a tree trimmer! I admit it...I'm horrible at it. And I thought I mucked up our tree. But Michael came home and assured me that I just needed to take off a few more branches and it'd be fine! :) So we did just that. 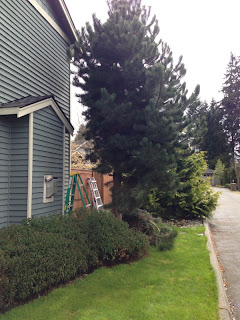 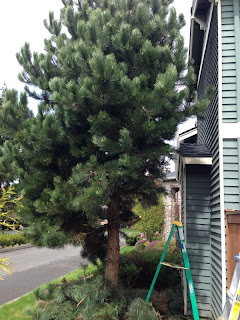 I believe that out of the last few days, yesterday was my busiest day. I was up at 6 AM with Michael, and decided that I might as well start my day. So I decided to venture to the place where lesbians roam, Home Depot, at around 6:30 AM. I needed to fetch all the materials needed for my watering system project for our garden. And unlike my chicken waterer, I planned this out so I wouldn't have to make a million trips to Home Depot! :) Let me tell you...this proved to be very valuable. But one word of advice to you...make sure that you look at each pipe fitting or adapter you grab. Just because they are in the same bin...does NOT mean they are the same! So I did have to run back once, but it was luckily a piece that could go on after everything else was done and buried! **phew**

After getting home at around 7:30 I took the yard waste bins over to the big pine tree and began the task of breaking down all of the branches! This was a chore. Luckily I bought new hand trimmers while I was at Home Depot, which made the job MUCH easier! Over the next 45 minutes I managed to fill up both of our yard waste bins as well as a large paper bag! Much to my delight...I managed to get all of the pine branches and needles broken down! 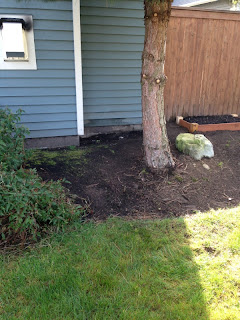 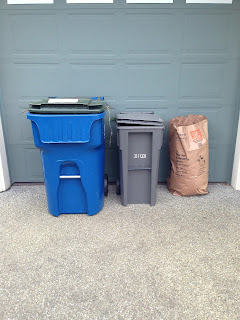 After this was done I decided it was time to tackle the watering system project. Last year we ran two hoses along the side of our house, around the patio and to the garden. While this worked...I always knew this was temporary. And even though this project was a ton of work...I fully believe it was well worth it! I dug the trench around the patio, and cut the pvc pipes, tested to make sure they fit, and then glued them all together. But the entire time Cooper was watching me. I felt like Michael had sent him to supervise...to make sure that I wasn't going overboard. And I think that the was satisfied. He did follow me every time I scooped a shovel full of dirt and walked it to the trench and back. Man that dog is a micro-manager! But I have to say, after getting the pipes buried, and testing them...I'm happy to report that it works, and it does NOT LEAK! **double phew** :) For this project I put down about 62 feet of pvc pipe(31 feet for each system). And I did two pipes so we could have two watering systems in the garden.

Yesterday I also had to run Cooper to the vet for his annual check up. All was good, except he's a total moron whenever we take him in public. I maintain that he is the reason I drink. :) But I do love my boy...he can be a good dog, when he wants. :)

While I enjoyed being in the sun all day yesterday, it really wiped me out. And all that shoveling, and digging, and moving sod gave me lovely blisters on my hand and a sore body today. But hey, I guess it's a good thing...because that means I did some man's work. :) I'm not just a pretty face who cooks...I'm pretty handy when I need to be! :)

I've also realized that I post a ton of things on my Facebook page that I forget to mention here! **hides face** I've added some new videos recently so make sure to check out my YouTube Page!! So here are some pictures that I've posted on my Instagram, as well as on Facebook of some of the small projects I've been working on!

I'm sure that I'm missing several things that have been going on, but honestly I don't think my brain is really running at full speed! I'm not sure if you've been checking out the Chick Updates or not. But the 3 chicks have grown so much! And they will be leaving on Tuesday for Whidbey Island to their forever home. I've LOVED having them, and documenting their "growing up!" Speaking of chickens...I'm in the final days of the RHOSC Chicken Photo Contest! Pictures will be accepted until April 30th...and voting begins on May 1st! I hope that all of you take a moment to go to Contest Page and find out how to vote! You do NOT have to be a member of Facebook to vote! And I would love for all of you to cast a vote!! :) So make sure to check that page out and cast your vote starting May 1st!

Well things are going to be even more hectic in the upcoming days...we leave on Wednesday morning for Hawaii! I am so damn excited I can't even tell you! The dogs are booked at The Dog Spot for their "vacation." We have our house being tended to, the garden is all set up to be watered, the chickens will be all ready to go with their new and improved waterer system! But there are still so many odds and ends that need to be done! Today I worked on vacuuming the entire house and dusting almost every wood surface! Mexi-rella is back! :)

And for dinner tonight I'm making Grilled Flank Steak Sandwiches with Nigella's Broccoli & Stilton Soup! I'll be using this meal as my step-by-step photo blog for next week! Make sure to look for that!! :)

Well friends...I need to finish up a few things before Michael gets home from work...and then it's time to get dinner going! I hope you all have had a great week, and that you visit my blog next week to start voting for the RHOSC Chicken Photo Contest! Also...I WILL be blogging from Hawaii! I can't wait to share photos and stories with you...and I'll try not to make you *too* jealous. ;-)

Until next time...Keep Cooking!
Posted by The REAL Housewife of Snohomish County at 5:43 PM