New Life on the Farm.

I can finally take a breath, and its not labored. During the last 5 days, there were times that I could barely breathe and sleep was little to be had. Why you ask? As you know I had 6 eggs in my incubator, and two days before hatch date they decided to pip!

A "pip" is what happens when a chick breaks open a little hole in the shell of the egg to start the hatching process...and Egg #5 decided to pip two days early! I felt a little bit like a woman who goes into labor 3 weeks early! I wasn't ready by any means, the heat lamp in the brooder box wasn't set up yet! I didn't even have all the parts for the watering system either. But, like a true champion...I made the best of it.

Wednesday night I didn't sleep much at all. As a matter of fact I slept on the couch because I woke every hour or so and went and checked on the eggs. I should have just gone to bed that night because the action didn't start until around 5:45 AM! :) Throughout the day all 6 eggs had pipped, and 3 of those had hatched. YAY! But come 10 PM that is when I started to get a pit in my stomach.

I realized that Egg #6 was not progressing like it should have. The chick had pipped earlier in the morning, made a decent sized hole, then the action stopped. I worriedly watched it all day, which proved to be difficult most of the time because the hatched chicks would walk around the incubator and sit on the un-hatched eggs, rolling them all around. I made the decision around 11:15 PM to take that egg out of the incubator and moisten up the membrane that was showing, to help the chick a little bit. I also added some damp pieces of wash cloth to increase the humidity. And then...I made the decision to just go to bed.

I won't lie to you, this was such a gut wrenching decision. I felt like such a jerk when I crawled into bed, and I felt a bit defeated. I slept quite fitfully that night and when the alarm went off at 6:00 AM I didn't want to go down to my study. Reluctantly I went down. I found one egg had just hatched, and another was on it's way to hatching! Egg #6 was still in the same spot it was when I left it less than 7 hours before. The chick however was still alive, but I knew that it was time for me to intervene.

With the guidance and support of a friend who raises chickens, I waited for the other egg to hatch and then I removed Egg #6. Armed with tweezers, Q-tips, and a cup with warm water...I began to moisten the membrane and then peel off parts of the shell. I removed about 3/4 of the shell and moistened the membrane as best as I could. Since the egg had been out of the incubator for about 20 minutes I put it back in for a while. At 8:15 I decided it was time to help the chick out of the outer membrane. So again I removed the egg/chick and with the Q-tip and warm water I began to moisten the membrane and push it off the chick. At 8:35 AM, this was what the chick looked like. 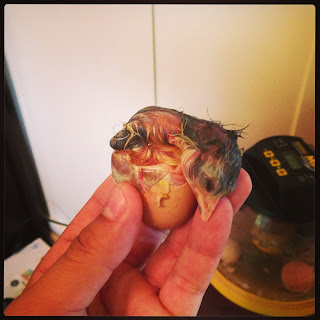 The poor little chick was so exhausted after 24 hours of struggling. When I put it back into the incubator and it fully pulled itself out of the shell...I started to cry. Okay...I know that is kind of dumb, because it's a chicken, right? But I guess to me it was more than that. I felt it was my responsibility to help this chick as much as I could, and after leaving it for dead the night before...I felt like I had the 2nd chance to help it. And when it finally pulled itself out and was breathing I couldn't help but feel all this emotion just release.

I watched this little one through the course of the day...it spent most of the time on the floor of the incubator, alone since I moved all its siblings to the brooder box. Every now and again it would sit up, flop around for a few seconds then just fall down again. I didn't really know if it was going to make it. With some advice from a Facebook group called Hatch-a-Holics Anonymous, I picked up some Rain Berry Gatorade and an eye dropper and I gave the chick some drops of it. Within a few hours the chick was sitting up more, chirping more and being more alert. By early evening, it was ready to move to the brooder box! I gave it Gatorade several more times throughout the day just to help it out.

I was scared to leave them for the night when it came time for bed. And again, Saturday morning I reluctantly went into the garage. But much to my delight all of the chicks were doing quite well! I've been calling the little chick that I helped out of the egg, Miracle. Because it's a miracle that I mustered up the confidence to help it, and it had such a strong will to live! Well Miracle grew stronger throughout Saturday, and today it joined it's siblings in general population! I'm not counting my chicks fully yet...the first few weeks of life for these little ones is always a bit touch and go...but I can honestly tell you that now I'm able to breathe a little easier!


Walking into the garage and hearing the "peeps" coming from the brooder box is such a smile inducing thing! I want to be out there with them all day and night! But I know they need their rest, as do I! I've also been setting up the webcam in the brooder box whenever I go out to run errands. I call it ChickTV! :) I've been posting on the RHOSC Facebook Page when ChickTV is broadcasting! If you aren't on Facebook, send me an e-mail @ snocohousewife@gmail.com and ask me to put you on the ChickTV list! I'll e-mail you 10 minutes before broadcasting starts! **Your e-mail will ONLY be used to let you know when ChickTV will be broadcasting. It will NOT be shared with anyone, and everyone will be "blind copied" on the e-mail to protect your privacy.**

It's always amazing when you have babies of any kind in your life. And I feel very fortunate to have had the opportunity to hatch these 6 baby chicks! I even videoed the hatching of the first two chicks! I've uploaded the video of the first chick to hatch, and don't worry I cut it down from 40 minutes worth of footage to just over 3 minutes! :) Check it out!


﻿
Well I hope you've enjoyed this journey with me! And I update the "Chicken Adventure #3" page daily with new pictures of the each of the chicks! Check it out!
Until next time...Keep Cooking!﻿
Posted by The REAL Housewife of Snohomish County at 6:49 PM