So my first attempt at an interactive post only drew one response. Hopefully that doesn't mean that only one person read the post! But no matter what the posts must go on! Thanks to Jen for her response, she gets the "RHOSC Blog Reader of the Year" award! :) 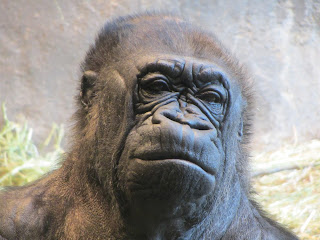 While at the Woodland Park Zoo a few weeks ago, Michael, my nephews and I made our way through all the exhibits. I have to say that Seattle's zoo is one of the best zoos I've been to when it comes to the exhibits and how the animals are cared for. But that being said this time, as well as the time before, I couldn't help but stop at the gorilla exhibit. I was drawn to this female gorilla both times and just as before it brought up in me emotions that wouldn't let me go.

I don't think as humans we give enough credit to animals when it comes to their emotions or feelings. Many think that animals lovers "humanize" their pets or other animals that they come across. While that may be true, when it comes to gorillas its hard to deny that they have emotions and feelings and are able to portray those through facial expressions.

When I walked up to the gorilla exhibit all the gorillas were running around and acting goofy. But this one female was sitting in another part of the exhibit by herself. I don't know how old she is, or what her story is. But I assume that she was born in the zoo system and has never known what it was like to be in the wild. But that being said, I don't think you can ever tame these beautiful creatures. This is what I saw when I walked up to the glass... 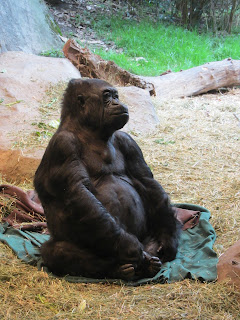 She sat there in this position the entire time we were there and the only movement she made was to turn her head in our direction. She looked me in the eyes and all I could feel was this profound sadness. This sadness took over my body as we held each other's gaze, and I couldn't look away. I felt almost guilty as I took pictures of her. And as I continued to take pictures she turned her head away and once again had that far off, distant look on her face. And as my nephews were itching to get on to the next exhibit, I was frozen there...just staring at this sad creature.

I remember feeling the same way a few years ago when I saw her because she had the same look on her face. As I said, I don't know her story, but I can't help but feel that she knows that her life is different from that of her fellow gorillas. I wonder if she still has something inside her that aches for the jungles, something that tells her that this isn't where she is suppose to be. I then start to think about what it'd be like to be in her place.

Many people will jump to defend the zoos saying that they are helping to preserve these magnificent creatures. Or that they don't know what they are missing because they've never been in the wild. But you can't honestly tell me that you can look into the eyes of this gorilla and not feel the sadness or despair. While it may be true that she has the best care in the world at the zoo, she is still a wild animal and I can't imagine how it feels to be her.

As I turned to walk away from the exhibit, she and I shared one final glance. Part of me hopes she knows that I feel for her, that I am sorry that her life is going to be spent in the zoo. Another part of me is happy that she has no predators and that if something goes wrong with her health she has experts to take care of her. Either way...I won't forget the look in her eyes. I won't forget how it felt like she was looking in my soul and asking "How can you take pictures of me? How?" As I took the pictures all I could think about was writing a blog about this experience. And in some sort of weird way, telling just a part of her story. 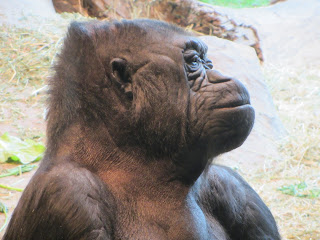 Posted by The REAL Housewife of Snohomish County at 8:44 AM