Oh I love a sunny day!

Much to my surprise the sun decided to make an appearance today, and it's amazing how everything from the chickens to the plants in our garden seem to respond to this amazing gift! I think back to being a kid in Montana and while the winters were freezing cold, the sun was normally out and shining most days. Which is extremely deceptive because even though the sun was out...it was NOT warm!

It was so nice to be greeted by the sun coming through the blinds this morning, and for a split second I thought that it was quite a bit later than 8 AM! Michael even mentioned yesterday how he took the sunshine for granted when he was growing up in southern California. Seattle winters have a way of making even the greatest rain lovers miss the sunshine and its warmth. But I digress.

Last night I was given a break from cooking, yes even I like a break every now and again, and we decided to go out for dinner. We have a cute Italian restaurant in downtown Edmonds that we were given a gift certificate for. The first time we went there, we immediately thought of all the things Robert Irvine would fix if this was on Restaurant Impossible...including the menu. But that being said we did have an amazing appetizer, both the first time and last night. It was their Goat Cheese Bruschetta. Okay, I love goat cheese, so creamy and tangy, it's all kinds of amazing! On top of the goat cheese they put pesto and a fresh marinara and served it with grilled pieces of bread. I could have eaten the entire thing by myself as a meal! So good!

Since I took a break from cooking last night I decided that I'd make a nice meal for lunch today. So I again turned to Nigella for some inspiration. I found myself drawn to her "Tarragon Chicken" recipe. And as per usual, her recipe did NOT disappoint! And I can honestly say this will be one of my go to recipes because it didn't take longer than a half hour from start to finish. Along with the chicken I used some basmati rice from dinner the other night as well as my go to way for preparing asparagus.

I love that this recipe calls for very few ingredients!(click link above for the full recipe and ingredient list) And as per usual, I substitute some things because I don't have freeze-dried tarragon, nor do I feel the need to buy white peppercorns since I don't use them often. 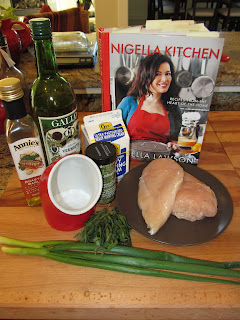 First things first...always season your protein. I know she doesn't call for it, but it has been ingrained in me to season every step of the way! (Thanks Anne Burrell!!!) So season two boneless, skinless chicken breasts with a little bit of Kosher Salt and fresh ground Black Pepper. Season the top side, you can season the bottom side later. At this time I also preheat the oven to 425 F, this way it will be up to temp by the time I'm ready for the asparagus.﻿ 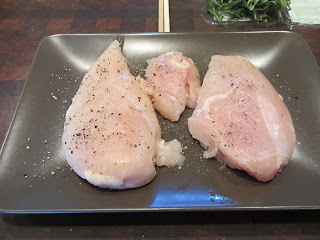 In a small frying pan heat up 2 teaspoons of garlic flavored oil. And then toss in the thinly sliced scallions. (2 fat scallions or 4 thin ones). After stirring for a few seconds add the freeze dried tarragon(I used regular dried tarragon). Let this saute for about a minute. 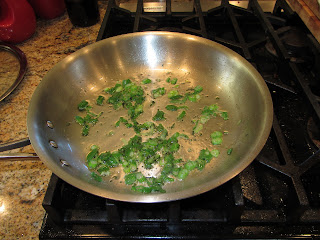 Then add the two chicken breasts, seasoned side down. Then season the bottom (now top) sides with Kosher salt and Pepper. Saute these for about 5 minutes. Scrape the pan if you notice the scallions are starting to burn. (I know there are three pieces of chicken, but the small piece was a small chunk of meat still attached to one breast...didn't want to waste it!) 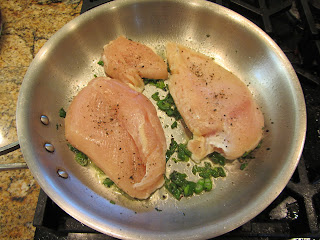 While the chicken is sauteeing for 5 minutes, now is the time to start the asparagus. 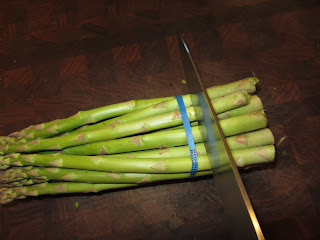 I normally leave the bottom rubber band on and cut the asparagus ends off just below this. (Save the ends if you are making stock soon) 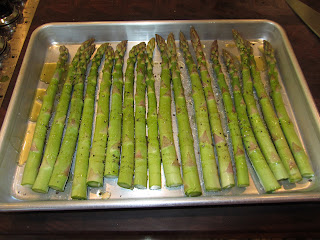 Then arrange them on a baking sheet, and drizzle liberally with Extra Virgin Olive Oil. And season with Kosher Salt and fresh ground Black Pepper.

After the chicken breasts have sauteed for about 5 minutes, flip the chicken over and pour in 1/3 cup of vermouth or white wine(whichever you have on hand). Let this bubble for a second then season with 1/2 tsp of kosher salt. 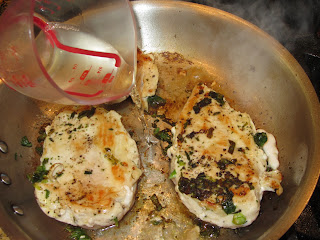 Then turn down the heat to low to medium low and cover. Let this simmer gently for 10 minutes. When it gets close to the 10 minute mark, use a meat thermometer to check that the thickest part of the chicken is at 165 F. If it isn't, cover and let simmer for a bit longer until the proper temp is reached. 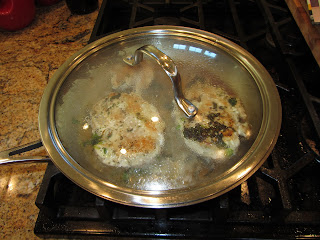 After you cover the chicken to simmer, pop the asparagus into the preheated 425 F oven. Set the timer for 10 minutes. Depending on how thick your asparagus is, note that mine was pretty thick stalks, 10 minutes should be perfect cooking time. If you have thin asparagus, check it after about 4 minutes. You want the asparagus to be cooked but still have some crunch to it.

While the chicken is simmering on the stove, finely chop 2 tsps of fresh tarragon. And put this to the side until later. 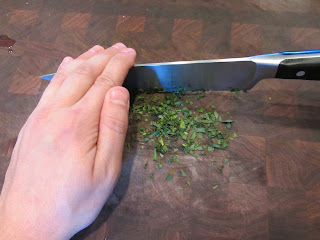 Once the chicken is at the correct internal temp(165 degrees F) remove it from the pan to a plate and bring the remainder of the sauce to a boil. After it's boiling, add 1/2 cup of heavy cream. Stir this in, allowing it to bubble for a few seconds. Add the chopped fresh tarragon, and season with some fresh ground black pepper. **Note that Nigella calls for fresh ground white pepper...but I used black pepper. 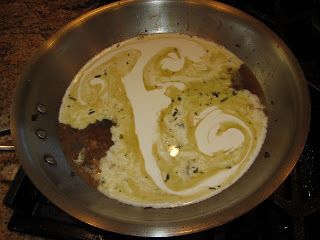 Allow this to bubble for a minute or two, and taste for seasoning, adjust if necessary. Once the seasoning is perfect, turn off the heat and start plating.

Remember, when the 10 minutes is up, remove the asparagus from the oven and let it cool.

Now it's time to plate! 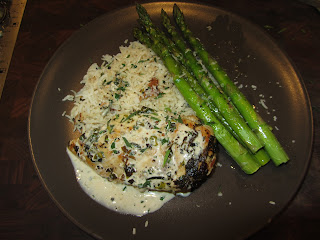 I always love to finish the asparagus off with a tiny bit of fresh grated Parmesan cheese...and if some happens to get on the chicken and rice...so be it! :)

Such a simple meal, and the flavors are amazing! I love Nigella's cooking, so fool proof and they have yet to disappoint! I can't wait to make this recipe again. Sadly it will be a while before I get back to this because I have about 100 other Nigella recipes to work my way through. (It really isn't that sad! ha ha)

Mike told me last night, "You've always been a good cook, but lately you've really stepped it up!" I smiled because I know that it's the truth. For a while I lost my love of cooking. Cooking became a chore, something I had to do. Since I've started blogging again I have found that I have a renewed sense of love for cooking. I've started planning the menus and seeing how I can put my touch on them. Mike also said, "Like the other night, you didn't just make steak and potatoes. You made, perfectly seasoned/grilled steak with grilled potatoes and swiss chard sauteed with red onions, garlic and finished with the perfect amount of Balsamic Vinegar." It's true, I've found my passion again, and as cheesy as it sounds, its thanks to all of you reading my blog.

Every meal I make, I take pictures of all the steps even if I know I won't be blogging about that meal. Passion, we all need it. Sadly, passion is easily lost when life gets stressful or mundane. But its also amazing how quickly that fire can be reignited! So I thank all of you for reading and commenting, you are truly driving me to strive to be a better cook and to always go above and beyond!

Well, its time to do some dishes and laundry and get ready to head to town. We are going out country dancing with my lesbians tonight! I love my life! Until next time...Keep Cooking!

Posted by The REAL Housewife of Snohomish County at 2:35 PM