Okay...so I've been VERY non-existent the last few weeks. This year has proved to be one that has thrown a lot in the way of me and my family. But just like we always have done, we've come out the other side stronger and ready to face what the world has to throw our way!

I traveled to Texas a few weeks ago to be by my mother's side as we paid tribute to the memory of my abuela, Yolanda. I feel lucky enough to have been able to go down there and be around family members who I haven't seen since I was a very young child, many I don't remember. My grandma still had two brothers and two sisters that are living and this proved to be a sense of contention when it came to Grandma wanting to donate tissues, skins, organs to people who needed them as well as being cremated. I was able to be a part of the family discussions as well as being there as support for my mom.

While the trip to Texas was a whirlwind, I'm so happy that I was able to go. As the oldest boy of me and my siblings, I feel this inherent need to be by my mother's side during times of stress or family problems. I've felt this ever since my mother and father divorced, and it was something I took on without anyone asking me to. On this trip I watched as my mother took over the reigns as matriarch of our family.

My uncle made a comment to me after the funeral about how "fun" this whole thing was, he was clearly being sarcastic. And I responded with, "I do not look forward to the day that I have to do this for my parents." I think that as human beings we think that we are immortal, and it scares us to speak of death and dying. My mother has always been very open about what she wants done when she passes. And I've made my wishes clear to my mother as well as to Michael.

During my time in Texas we went through my grandma's things and sorted out all the pictures that she had. During my rifling, I found this picture of me and Grandma; it was taken after my Uncle John's funeral a few years ago. 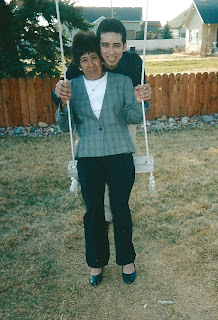 I can't believe how young I was! This was before I moved to Hawaii, I was still living in Boston. I can't believe how fast the last few years have flown by. My grandma's passing has really thrown in my face how quickly life passes us by.

Over the last few weeks, Michael and I have amped up our home search. We found a home about two weeks ago that neither of us could get out of our minds. We saw this home in Edmonds, and then viewed several other homes to compare them to it. We quickly realized that we didn't even have a close second when it came to houses that we like. And as we were touring other homes we met a wonderful realtor who offered to help us finish our home search. We viewed the home we liked again, and decided to put in an offer!

The last week has been a blur! We put in the offer, it was countered, we countered back and it was accepted! We've had a home inspection, another inspection followed by a repairs estimate given; we've measured and had sleepless nights as well and pondering where furniture would go. Well to be honest, I've been the one with the ideas in mind where our current furniture will be placed! :) That is my strength. I'm also not going to lie, I can NOT wait to film my first video in my new kitchen! This kitchen is a DREAM kitchen for me, and I can NOT wait to share it with my faithful readers/viewers!

The next few weeks will be busy for us, and if all goes well we'll be closing on March 16th. This is the first home purchase that I've been involved in, and I'm amazed at all the working pieces that are involved. I know in my heart that if things are meant to be, they will be. Things so far have been falling in place, but there are still some things that need to fall in place before everything works out. We have a great realtor and support system, so I fully expect things to run smoothly the next few weeks. I'll keep you all updated!

I look forward to cooking for and with you in my new kitchen!
Posted by The REAL Housewife of Snohomish County at 11:06 PM