Today was really focused on the honoring of memories. We started our day out by going to the Arizona Memorial at Pearl Harbor...and finished the day recalling the memories of our trip. And from one all the way to the other...we realize how important it is to honor the memories.

I was nervous to go to Pearl Harbor today, I felt the same way several years ago when I went to Ground Zero in Lower Manhattan for the first time after 9/11. I didn't completely know what to expect, knowing that it was a tourist destination of sorts. And seeing how there was that "incident" at Hanauma Bay yesterday...I was worried about what might take place at Pearl Harbor.

We arrived shortly after 7:30 AM, much later than the 6:45 we initially hoped to have. But we needed that extra time in the morning. However, when we got our tickets the park ranger looked at us and said, "Are there just two of you? Go over by that white wall and after we let everyone in if I have two extra seats for the 8 o'clock tour I'll let you in." Our tour was suppose to be at 9:45! So we wandered around, took a few pictures...and as they lined up to go in and watch the 23 minute film we walked up to the line. The lady looked at us, smiled and ushered us back and gave us two 8 o'clock tickets! Michael says it must be my amazing smile that gets us all these things! HA HA! :)

We sat through at 23 minute film that was both informative and gut wrenching. Michael and I both were holding back tears watching actual footage of the bombings and raids that took place. And they showed actual footage of the USS Arizona being bombed. The thing I noticed though throughout the video is it was completely silent in the theater. The respect that was shown from that moment on amazed me, and I was shocked and honored to be a part of it.

After the video we boarded a boat that was going to ferry us over to the memorial. The entire ride was silent...even as the captain swung the boat around to the dock. Not one word was said the entire time. As we all left the boat and continued to the memorial I felt the chills come over me. I had no words. When people on there would speak the people they were with it was always in a whisper. No one was yelling or screaming, no kids were making tons of noise...just respectful silence.

When I walked into the part of the memorial with all the names written of the soldiers who lost their lives...well...no words. I felt bad taking pictures there...I don't know. It's hard to explain to be honest with you. But this memorial is very sobering. Knowing that all those soldiers still lie entombed in the USS Arizona just beneath the waters of Pearl Harbor...it's...chilling.

Before we boarded the ferry back, one of the passengers who raised a flag up the flag pole started singing the National Anthem. This wasn't planned... As he held on to the rope of the flag pole, he sang the words of this song that means so much to this nation. Some people put their hand over their heart, some took off their hats, but everyone stood there in silence. Chills...and tears.

As we boarded the ferry back to the visitors center people returned to a state of normalcy...if that makes any sense. But I cannot believe that everyone held that amount of respect for that amount of time. I feel so honored to be a part of that, and to have been able to experience this memorial to the thousands who lost their lives on December 7, 1941. May they rest in peace.

Here are some pictures from Pearl Harbor... 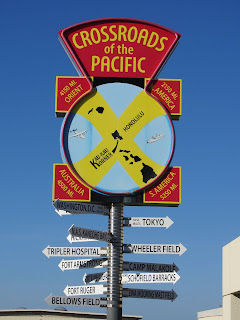 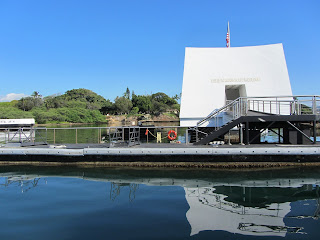 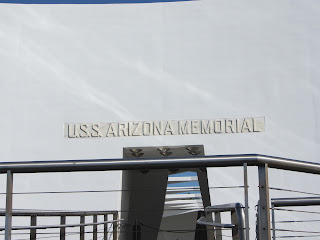 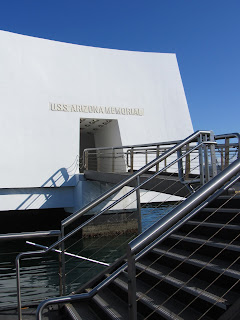 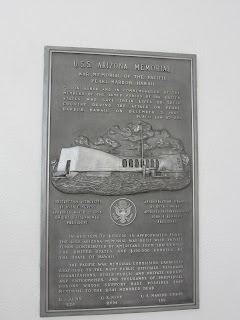 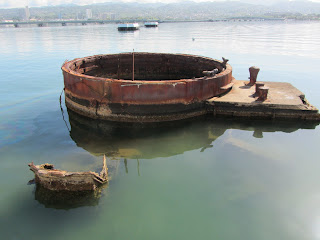 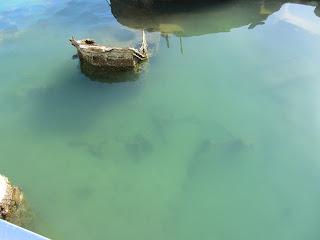 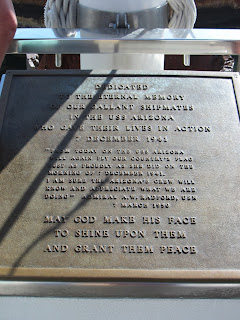 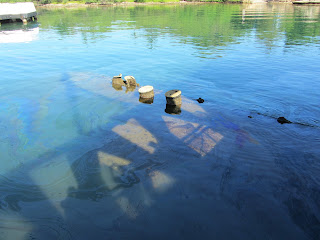 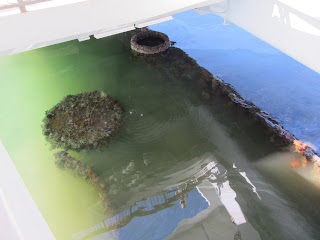 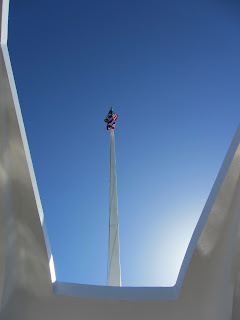 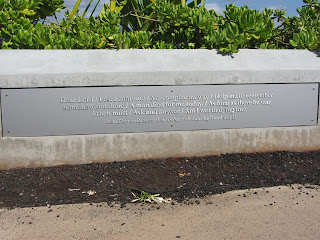 I honestly have no more words about Pearl Harbor. All I can say is that if you do travel to Honolulu...make time to go to Pearl Harbor. Plan to get there EARLY, and try to be emotionally prepared for what you are walking into. May all those who lost their lives on that day and any other day defending our country...rest in peace.

After we left Pearl Harbor we had lunch at a local place that Ms. Swan recommended to us. :) I had another Loco Moco (hehehe) and Michael had Oxtail Soup! Both were quite tasty! I think I'm turning Michael into a local boy! He is loving the local foods!! :) Yay!

On our way back to town, Michael asked if we could drive through Punchbowl, which is the National Memorial Cemetery of the Pacific. And of course I said yes. So we made our way up into this crater. And again...the respect was just evident throughout. As we drove in, the large banyan trees lined road up to the memorial. What a beautiful setting for a place to honor those who lost their lives. Please enjoy these pictures. 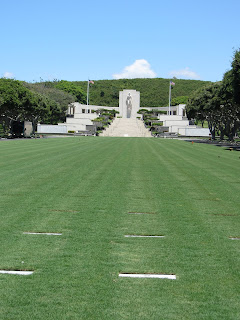 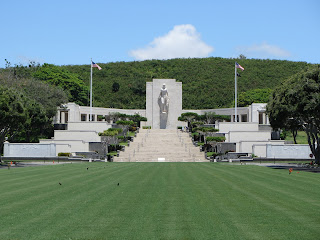 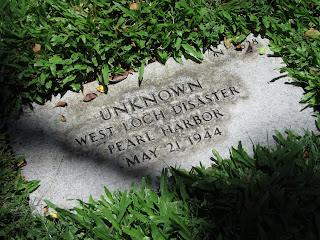 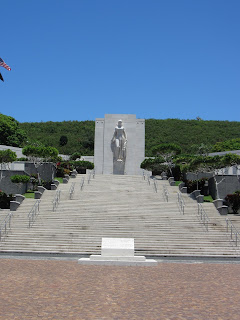 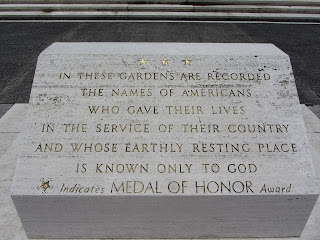 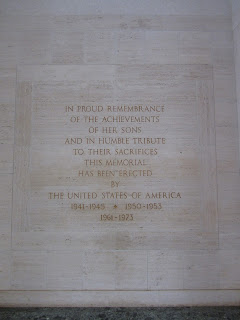 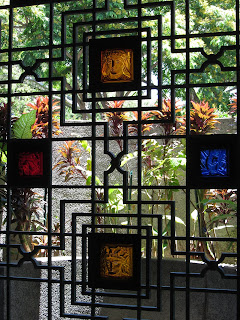 We took a drive around the rest of the cemetery, and noticed they were having a service in one corner. What an amazing day, I can't even begin to really put into words the magnitude of respect I have for the people who sacrificed their lives for our country and our freedom, and for those who to this day are putting their lives on the line. Thank you so much.

We've had such an amazing time on Oahu. We've enjoyed great meals, great laughs, great friends and made wonderful memories. I honestly can't wait to come home again. While sitting over dinner, Michael said to me that he thinks at the very least we need to come back once a year. I agree. My heart is here in Hawaii.

Tonight after dinner, we walked along Waikiki Beach...as we looked up at the stars we thought about our vacation and how much fun we had. The magic of the islands has captured many people...and Michael is now one of them. Thank you all so much for coming on vacation with me...and I hope you've enjoyed it as much as I have! I probably won't blog tomorrow since we'll be traveling back to the mainland and getting in late...but rest assured that my next entry will be the "BEST OF" entry! :)

We've had a wonderful time here at The Hilton Hawaiian Village...and even if you don't stay on this property, you must come in and walk around. So beautiful! 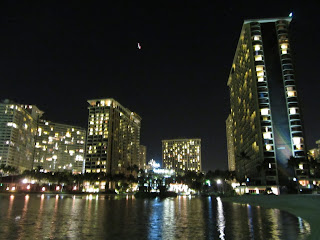 ﻿﻿
Posted by The REAL Housewife of Snohomish County at 1:12 AM