The cure for anything is saltwater...- Day 6

"The cure for anything is saltwater - sweat, tears or the sea." ~ Isak Dinesen

Yesterday was a rough day, I won't lie. After sleeping for most of the day and forcing myself to eat a few meals...I finally gave in and took some more Nyquil and headed for bed. But much to my delight I woke up this morning at 6 AM ready to conquer the world. Well...except for this pesky cough and runny nose!

After I watched some Golden Girls(come on...wouldn't you feel better after that?!?) we got ready and decided to take a drive with the intention of ending up at Hanauma Bay to snorkel. Well what a day! We started our drive by going up Mt. Tantalus on Tantalus Drive and then back down on Roundtop Drive. What a view from both of these roads! You can see the entire city of Honolulu with Diamond Head looming behind it! Such a beautiful sight! 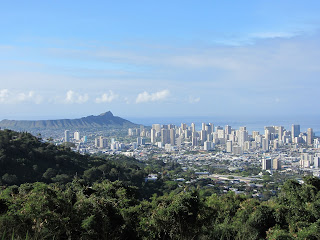 It's funny because this drive reminded me of the road to Hana on Maui. Mainly because it was had all these twists and turns to it which would have made me sick to my stomach if I hadn't been driving! :) Thank goodness for being the one to grab the keys in the morning, eh? :)

After our drive up and down the mountain, we headed through downtown by the Iolani Palace, and then made our way up the Pali Highway to the Pali Lookout. It honestly was such a beautiful day today! There was a nice breeze which kept it from feeling like it was in the high 70s! Funny thing though, when we got up to the lookout, all the Japanese tourists were taking pictures of the "wild" chickens that were running all over the place. And all I could think was...man I could make millions if I let a tour bus stop in my driveway! :) 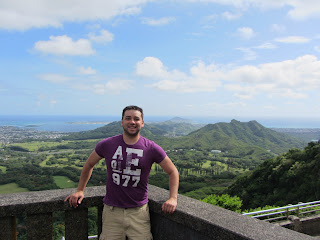 After spending some time looking at the view we decided to make our way through the tunnels to Kailua and on our way to Lanikai! :) Again...my favorite beach in the world is Lanikai Beach! And I had a mission to do today as well. My sister asked a favor of me, and I knew where exactly to do it at. If you remember a while back I shared my sister's story. And so my sister asked if I would write Lucy's name in the sand for her here in Hawaii. How could I say no? And what better beach than my favorite beach.

Michael and I also spent about half an hour swimming in beautiful waters of Lanikai before heading further south to our main destination. We were off to Hanauma Bay to go snorkeling! Now I'm not going to lie...I'm not a fan of snorkeling. I tried it once when I first moved to Oahu and I succumbed to my fear of small fish being followed by bigger fish that were being followed by sharks. But I told myself this time that there haven't been any shark attacks in Hanauma Bay, and if I were to be attacked by a shark, that it would be a way for me to get my name in the papers! :)

In all seriousness though, I was actually quite excited to go on this adventure! You can view all these fishes in aquariums around the world, but to swim with them is another story. So after we at lunch in Hawaii Kai, we made our way back up to the bay and luckily they had just reopened the parking lot! **score** And we made our way in, parked and purchased our tickets to get in. We had to sit through an 8 minute video on the preservation of the bay and its amazing wildlife and corals. During this video there was a bit of an incident. An Indian family and their children were seated in chairs along the wall, and their little girl for some reason puked. Well instead of bringing it to the attention of someone who worked there, they moved chairs to hide it. And after the video, they rushed their family out of the theater, leaving this wonderful little "nugget" to be found by some unsuspecting volunteer. **shakes head** I just don't understand people!

But back to the matter at hand. We rented our snorkeling gear and made our way to the beach. We immediately "suited up" and headed towards the water. Now I wish that I could say that I came prepared and used an amazing underwater camera to take pictures of all the beautiful fish! But that would be a lie! What I can say is that I took some amazing pictures of Hanauma Bay from above!!! :) But you'll see those later! :)

As we made our way out into the bay I really had to suppress my fear of the small fish - big fish - SHARKS. And once I began to see all the fish I was immediately lost in a different world. The colors of the fish are just amazing! We saw the Humuhumunukunukapua'a, the Hawaiian State Fish! :) And yes...I CAN say that! Can you? ;-)

But we also so enormous parrot fish and every type of tropical fish you could think of, including a puffer! We spent over three hours in total snorkeling throughout Hanauma Bay. And I have to say that I was beginning to become a bit down because I wanted one thing out of the whole experience. I wanted to swim with the Green Sea Turtles. But as we traversed the bay we didn't see any. When I was about to call it a day, Michael made a motion for me to come to the surface. He said through his snorkel, "Turtle!" JACKPOT! For the next fifteen minutes we followed this female green sea turtle as she made her way among the coral and the fishes. I loved to watch how she just rode with the current, with not a worry in the world.

Having spent this time with these amazing creatures I was ready to call it a day. So reluctantly we made our way back to the beach. After walking up the hill to the car I realized that I hadn't really coughed at all while I was in the water. While my sore throat wasn't present in the morning...I did have this annoying cough, and the runny nose. But while I was in the water snorkeling, it was like I didn't have anything wrong. And it brought to mind that quote by Isak Dinesen. And it couldn't ring more true! 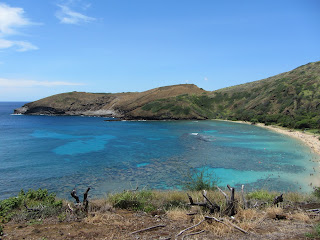 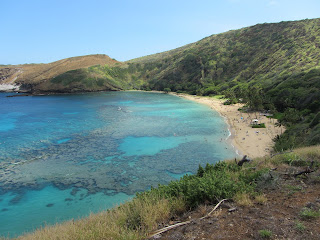 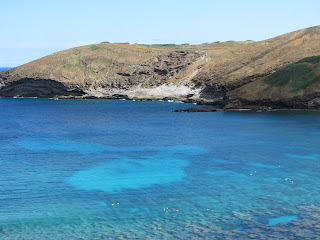 I can't believe that tomorrow is already our last full day in Hawaii. This trip has been amazing! It was great showing Michael around a place that I've grown to love...and I think he sees the same things I do! But it was also great to experience some new things with him as well, like Hanauma Bay. Hawaii is such a magical place, I can't even begin to put into words what it means to me.

Tomorrow we are going to get up bright and early to go to Pearl Harbor to the Arizona Memorial. I'm a bit nervous about this...these things always take a toll on me. But this piece of history is such an important part of all our lives and I can't believe that I haven't ever been there. As for the rest of the day...I'm not quite sure about that. I do need to film a video of my Hawaiian Breakfast for you all! :) So maybe I'll manage to get that in as well!

Well I suppose, I should head off to bed. I know these posts are coming in quite late for you on the mainland, considering Hawaii is 3 hours behind Seattle, but I hope you've been finding them enjoyable! I've enjoyed sharing these memories with you!

Until next time...Aloha 'oe.
Posted by The REAL Housewife of Snohomish County at 12:24 AM