I have no idea where the time is going, but it seems like I just made my last post yesterday! I can't believe it's already been a week! But for the last week or so I've had something on my mind. And it's been my neighbours! Despite the title of this post...I have found that this is one of the Commandments that I haven't always followed. However, the older I get, the more I find neighbours that I enjoy letting in and being a part of my life. When you are purchasing a home, or even renting a home or apartment, they always tell you to go and meet some of the neighbours to get the feel for the neighbourhood before moving there. But this isn't always something that is feasible.

When I moved to Honolulu in July of 2006, my boyfriend at the time found the apartment we moved into about two weeks before I moved to the island. Being in a completely new place, with no real friends, a job or any sense of stability, I was fortunate enough to have neighbours who lived across the atrium from me who were amazing. Ikaika and Lehua quickly became an integral part of my life in Hawai'i. I can remember cooking in my kitchen, and I would hear a door open and close...and then not long after that, Lehua would be peeking in my window to see what I was cooking. There were times she even had a fork in her hand!

Lehua would always text me when I was watching America's Funniest Home Videos because she could hear me laughing. We were more than neighbours, we were friends. When I moved down the street and around the corner, she would come over for sleep overs like we were kids! :) It wasn't the same though, I longed for the days when I could look out my door or kitchen window to see if she was home.

When I moved to Seattle, Lehua was one of the people that I kept in contact with. We call each other, text each other and she's even been here to visit a few times. When you find a neighbor like that, you don't think it will ever happen again.

When Michael and I found our home here in Edmonds, we didn't meet any of the neighbours before hand. Shortly after moving in, we were out playing basketball in the driveway(okay stop laughing...yes I was playing basketball) when our neighbour from across the street came over to introduce herself. Geri quickly became someone we trusted, she has a key to our home and she even checks on the chickens if we are ever out of town.

We've shared many glasses of wine, some meals, and spent hours swapping stories and becoming friends. It hit me the other day how lucky we truly are to live next to someone like Geri. Michael compared Geri and I to Lucy and Ethel! Now clearly we can't decide who is Lucy...but secretly we both know that it's me! :) I can only imagine if Geri wasn't working...the trouble we'd get into. And in all honestly, Michael is totally Ricky Ricardo. I always have some 'splainin' to do when he gets home. And he knows that if I'm not here when he gets home...that I'm more than likely across the street!

There are times when you become friends with your neighbours, and then there are times that you are invited into their families. On the 4th of July this year, Geri invited me to her daughter's house since Michael was working. I had such a fantastic time mingling with the family, and sharing Anne Burrell's Stuffed Piquillo Peppers! :) On a side note...Geri's daughter took Carnie! And last I heard she has integrated very well into the new flock! :)

A week or so ago, Geri sent me a text asking if I had any Cocoa Powder, she needed it for something she was baking. I walked across the street to talk to her, and then came back to search my pantry. Luckily we had some, so it saved her a trip to the store. We trade produce from the garden...she comes over for lettuce, peas and beans...and in return she supplies us with more zucchini than we could ever dream of! I joke that she is the local zucchini pusher! :) But hey, it could be worse!

Much to my delight she was making a Chocolate Zucchini Cake, a recipe that she's had for more years than she'd care to admit! (I saw the original recipe from the magazine and it was quite faded!) But that being said, after it finished baking, she brought some over for Michael and I to try. Now I'll be the first to admit that I'm not a big fan of zucchini. But that being said, this cake was QUITE delicious! So delicious that I asked for the recipe...and I even asked to borrow her bundt pan! :) And I've decided to share this recipe with you! 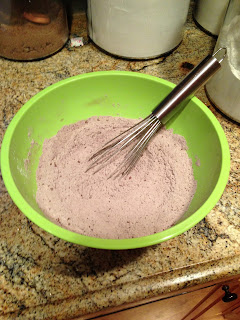 In a mixer (or with a hand mixer) beat the butter(or margarine) and sugar until blended smoothly. 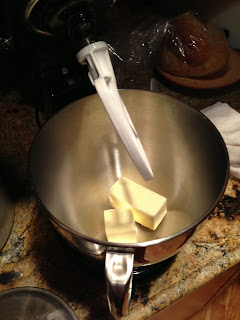 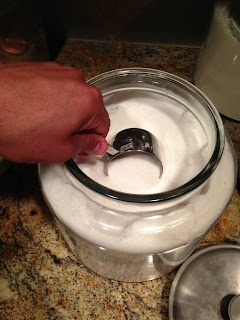 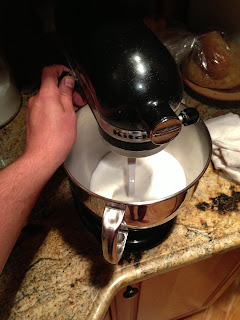 Add the eggs, one at a time...waiting for each to incorporate before adding the next. 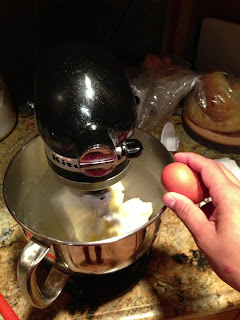 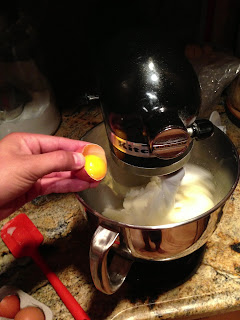 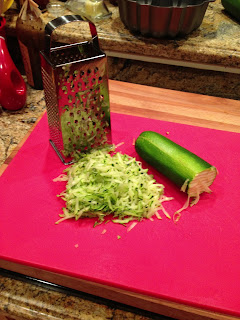 Using a small cheese grater, or a zester, zest the orange. 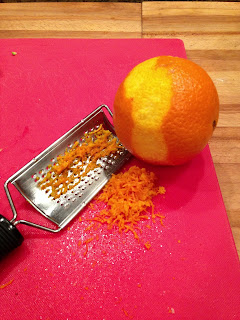 Using a spoon, mix in the vanilla, orange zest, and grated zucchini. 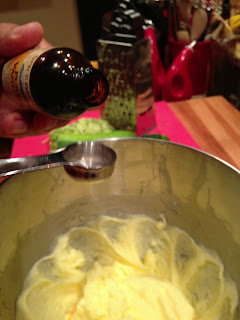 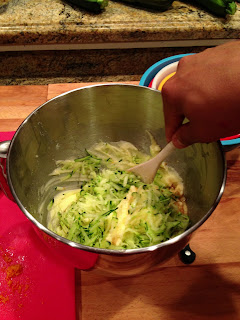 After those are mixed in...it's time to add the dry ingredients and the milk. 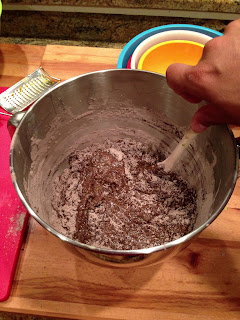 After adding the final 1/3 of the dry ingredients, add the chopped nuts at this time. 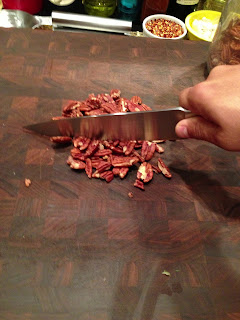 Now it's time to grease and flour the bundt pan. I used butter. Using your fingers or a paper towel, rub butter all over the inside of the bundt pan. Then sprinkle flour inside the pan. Roll the pan back and forth in your hands to distribute the flour equally to cover all the butter. Then shake the rest of the flour out into the sink. (I turned the pan upside down and hit it with the heel of my hand get all the flour out) 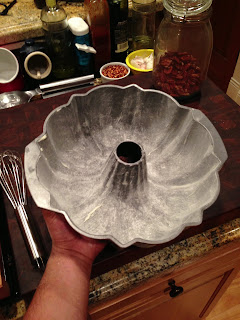 Now add the mixture to the pan. Shake the batter to get it even. 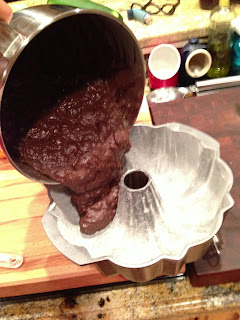 Bake the cake in a 350 degree oven for 1 hour...or until a tooth pick inserted into the center comes out clean. 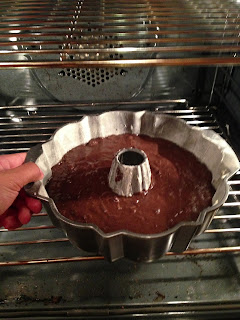 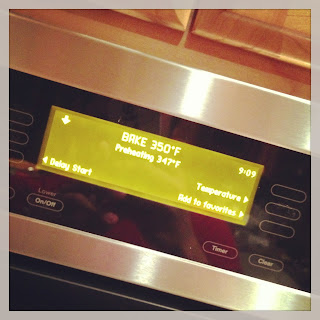 Check with a tooth pick. And if it is dry and clean when you pull it out...the cake is done! Let the cake cool IN the pan for 15 minutes. 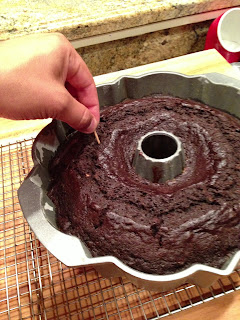 After the 15 minutes...turn the cake out onto a cooling rack to cool thoroughly. (Look! My cake turned out!!) 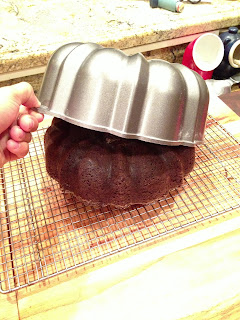 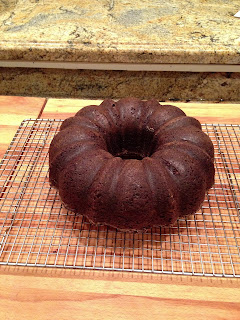 Now it's time to make the glaze! You can use beaters for this, but I just used a whisk and some elbow grease. Combine all the ingredients for the glaze in a medium bowl...and beat like hell...until smooth! :) 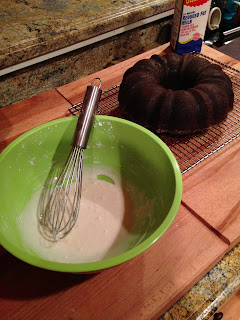 After the cake has cooled, drizzle the glaze over it...and ENJOY! 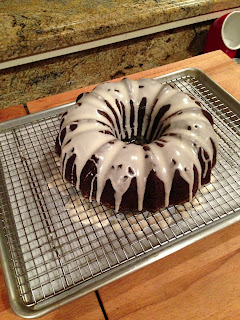 I am being honest when I say this...I LOVE this recipe! And what's even crazier is that I'm NOT a baker! :) But this was something even I could do. And Michael truly did prefer the walnuts that Geri put in her cake, as opposed to the pecans I used in mine. But I'm sure that you will decide what you like!! :)
I'm truly thankful that we found an amazing home and were fortunate enough to have an amazing neighbour that has become a friend. I asked Geri last week if it would be okay if I included her in a blog post. She was a bit confused...wondering what I'd even write. Well Geri, you've truly become a friend, and I've enjoyed our chats, the glasses of wine we've shared as well as the produce you push on us! :)
Until next time...Keep Cookin'!﻿
Posted by The REAL Housewife of Snohomish County at 6:08 PM