What a busy day it was today! We started at 6 AM when the alarm rang. And again...Dolly Parton's song was rolling through my brain as I tried to get my day started. We wanted to make sure we made it up to Whistler with plenty of time. And we accomplished that goal! :)

I had never been to Whistler...but Michael has been there twice before. He went a few summers ago for the hiking and several winters ago for the snowboarding. We planned a trip up there during our brief stay in Vancouver because we've been wanting to go zip lining for quite some time! Michael booked us with the ZipTrek Eco Tours out of Whistler, and we booked the "Mammoth Tour." This tour afforded us 10 zip lines as well as lunch! And as a bonus, included with our tour were two tickets for the Peak to Peak gondola ride from Whistler Mountain to Blackcomb Mountain.

We were on the road this morning by about 7 AM, and we arrived in Whistler a little before 9 AM. Plenty of time!! We stopped and had breakfast at a little place in Whistler Village (Truth be told we were BOTH starving and it was the first place we came to that wasn't a coffee shop!) 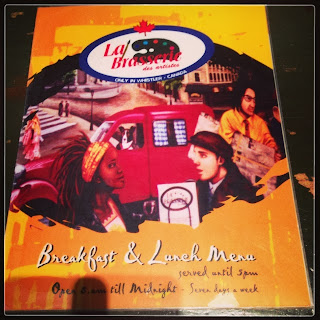 As far as breakfast goes...it wasn't too shabby. After eating, we made our way to where we were suppose to check in for our tour. And much to our delight, there was only one other person who would be joining us! *Yippee!!* After checking in we had some time to kill, so we walked around the village. It was such a spectacular day in Whistler. When we arrived it was about 48 degrees...chilly...but lovely! On the way home, the thermometer said 66! We totally lucked out with this trip...seriously. The tour guides said that the last week or so has been nasty weather! We apparently brought the sunshine with us. Now I'd love to say that it was my smile that brightened up the sky...but I know I can't fool you anymore! 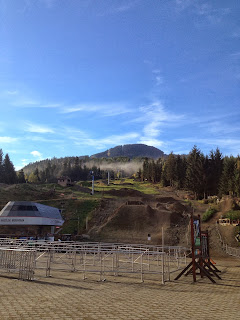 Here is a picture of the gondola that we rode up the mountain. ;-) Just kidding. But I assume this is an old one! LOL 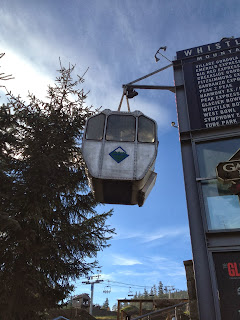 We rode up the small gondola to the "beginner level" of the mountain. This is where our tour actually started. Our two guides were great! Nick was from France and Kenny was from London. They were both full of fun stories and interesting facts. We had a great time with them. I, of course, focused on Nick and gave him a bad time the entire day. Well it actually started at lunch time when he was telling us a story about visiting family in the United States while he was still living in France. He asked them if he could have an apple, but pronounced it like APE-ple. Now if you know me...you know that any little door like this...I blow it wide open. And he was subjected to ridicule for the rest of the day. And let me tell you...he gave it right back! It's always fun to spar with someone who can compete on my level! LOL

But as you can see from the pictures, we had a stunning day! This first picture is from one of the first zip lining platforms. Such an amazing view! The stream below actually separates Whistler Mountain and Blackcomb Mountain, and we crossed it several times throughout the day on the different lines! 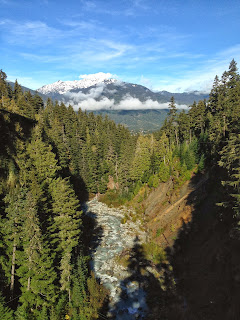 The platforms are pretty crazy. They are built up in the canopy of the trees, and each one has stairs that you walk down and jump off! 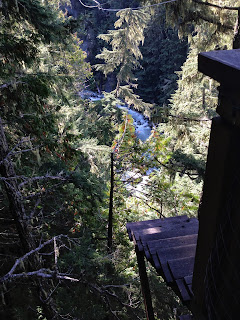 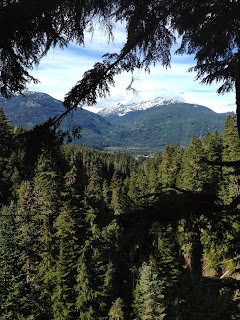 It's amazing how much we take for granted the beautiful area of the world we live in. We get so wrapped up in our daily lives, that we forget to look around us at everything that is right in front of our faces. To be honest...most of this scenery can be seen in western Washington, not far from us...but no matter what...it's still stunning.

We spent a total of about 4 hours today doing the 10 zip lines and having lunch. We did a fair bit of walking, and climbing hills and trails to and from the various platforms. All in all it was a fantastic thing to do! It was a bit pricey, I won't lie...but it truly is a one time deal...so why not splurge?

While in Whistler we saw this bear...and you know I can't pass up an opportunity for a picture! And it was perfect that I was wearing this shirt. My face is saying, "Ugh...Ain't Nobody Got Time For Dat Bear!" :) 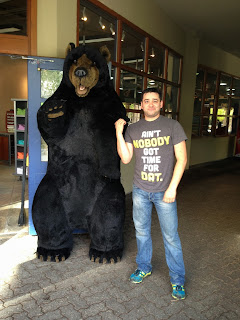 This is a view from atop Whistler Mountain. Such a gorgeous day!! 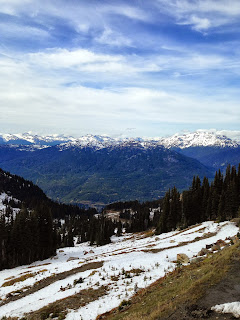 If you have a chance to come to Vancouver, spend the money and time and make the trip to Whistler. It was a perfect day trip for us, honestly. And the Peak 2 Peak is amazing. Scary...but amazing! This gondola is a world record breaker! It has the longest unsupported span, 1.88 miles! That's right! From one tower to another, in between those two towers it crosses over the valley between Whistler Mountain and Blackcomb Mountain! Amazing! 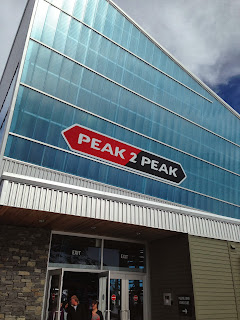 Here is the gondola we rode in! They have comfortable seats, all the windows provide amazing views! 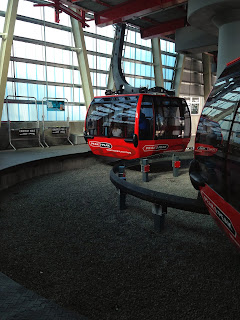 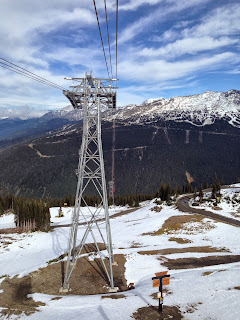 The views are phenomenal! 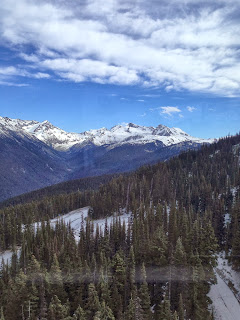 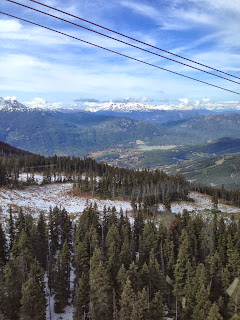 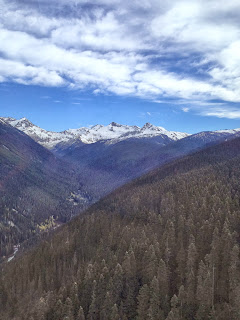 It's crazy to see the line of clear cut beneath the entire length of the span!


Once atop Blackcomb Mountain, the views are just as stunning! 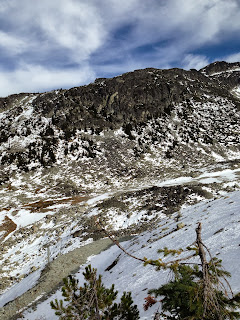 A few panoramic views from atop Blackcomb Mountain.

I'm totally fascinated by the gears and pulley system that control the gondolas! So incredible! 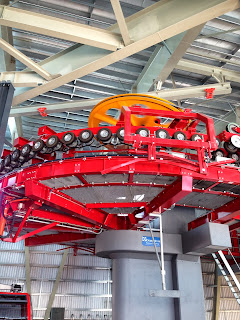 Back up on Whistler Mountain, I finally had the chance to stand next to the Olympics sign!! :) So crazy to think that just a few years ago there were athletes from all over the world that walked these very slopes! :) 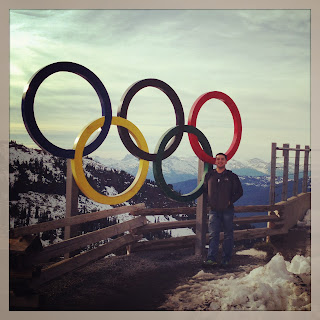 Here is the pulley/gear system for the smaller gondolas. I don't know why I like them so much! 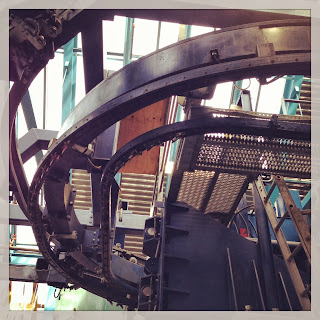 Driving home tonight I had a chance to really appreciate the beauty that is the Sea to Sky Highway! The granite faces of the cliffs in parts are just spectacular! 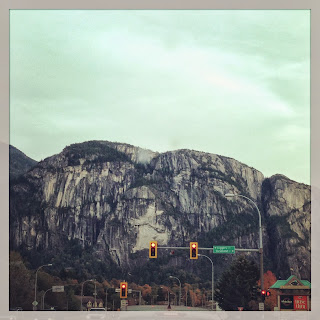 My sexy sunglasses work better when I have my real glasses on. :) If you don't follow me on Facebook or Instagram...I posted a picture of these a few days ago after I got my eyes dilated during a checkup. I don't own sunglasses so they eye doctor gave me these to slide behind my glasses. LOL. Classy AND Sexy...I know...control yourselves. ;-) 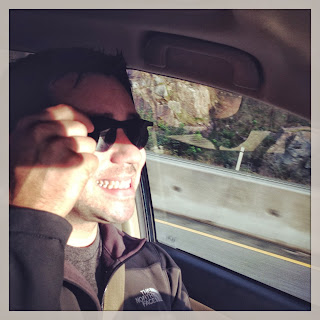 We arrived back into Vancouver at around 6:30 tonight. After such a fantastic day we decided to dine at a place we've eaten at once before during a previous visit. The Twisted Fork on Granville. I had the ribeye and Michael had the pan seared halibut. Rarely do I feel the need to tell the chef that the food was fantastic...but tonight was different. My steak was cooked to perfection, and the little bit of stilton on top was an amazing touch. Now granted, all of this could be because we expended so much of our energy today that cardboard would have tasted good...but I truly believe this food was amazing. Another "must eat at" if you are ever in Vancouver!

Tomorrow morning we plan to sleep in...and then its time to head back to Seattle. After a quick stop at Coastal Farm & Ranch...we have to pick up the boys. I wish we could just leave them at The Dog Spot...but sadly...we can't. :( LOL. Such a wonderful vacation to Vancouver, even if it was short.

Hope you all had a marvelous weekend! Until next time...Keep Cooking!
Posted by The REAL Housewife of Snohomish County at 9:20 PM