I can't believe that today is already the end of our vacation. Like I said yesterday, it seems like we just flew in...but in the same breath it's like we'd been on island for months.

This trip was a bit more low key than last year's trip. Last time we did all the main tourist things, so this time it left time to actually relax and just enjoy each other's company. We watched so many movies that I forget all of them! Even though we spent a fair bit of time "doing nothing," we were both perfectly satisfied with how the trip went.

I'm sitting here on the plane about 1/2 way back to Seattle, the sun is setting outside my window. 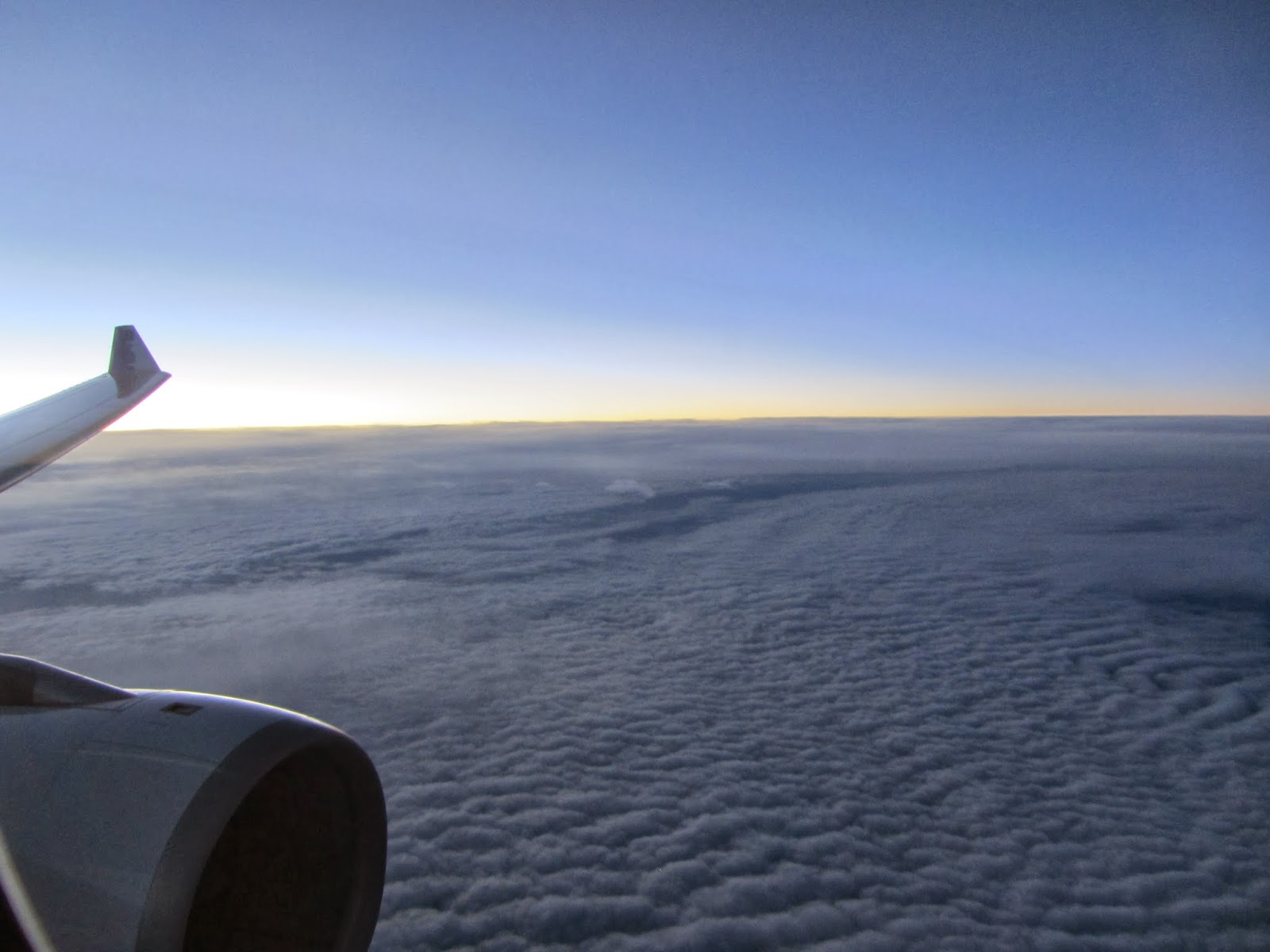 We just had our meal service, it's so nice that Hawaiian actually serves a complimentary meal!

I keep having flash backs to things we did on this trip. I also can't help but think of my life in Honolulu that I left six years ago. Most of my friends have moved on, either to the mainland or, like my friend Brian...to Kuala Lampur for a job. I met so many amazing people when I lived there, people who will forever be a part of my life, even if we never talk again.

Michael and I talked about how we would go about moving to Hawai'i, but I know that if we did move, that would put having a family on hold. And honestly, I'd rather have a family than move back to Hawai'i...because the islands will always be there. But moving to Oahu is something that we strongly feel is a part of our future. Distant future that is. :) I don't know if The REAL Housewife of Honolulu title has been claimed or not! I guess I should get on that. :)

Overall, I'm very happy with our trip. We swam in the ocean just a few times, one of them being at Hanauma Bay. We got to spend time with Claudia, Grandma Lee and the entire Lee clan...and that is always something that I look forward to. I truly do feel as if I have a real ohana (family) on the island of Oahu. It was also nice being able to reconnect with several of my former coworkers. I do have one story that I want to tell...and I'll refrain from using the names of people involved so they can still appear to be "innocent." :)

The other night at the grand opening party for Hokulani Waikiki, a former coworker that I keep in touch with was telling us about how HR sent out a memo stating that all pictures on employee badges need to be "serious" in nature. Apparently people were goofing off in their photos. When it came time for him to get his picture he decided that he would do something. At this point he pulled out his employee badge and showed us the picture. We all burst into laughter when we saw it was a picture of the back of his head. Only him...only he could get away with such a thing! He made such a good point when he said, "There are things that they take way too seriously."

I think in our daily lives we all take things too serious. The things that bother us are usually things that are so minor that we shouldn't be wasting our time being bothered with them. We should be saving our energies for matters that truly are important. I guess that's what that book was about...."Don't Sweat the Small Stuff." Easier said than done, I know.

Oh boy...as I'm typing this we are hitting some wonderful turbulence. The pilot seems to be taking us up in elevation and then back down to try and avoid it...making me light headed because of the quick altitude changes.

Okay...back to our regular programming.

Its funny how island life is really slow compared to life on the mainland. People are a bit more relaxed and go with the flow. It's something that I struggle with, and I know that I need to work on it. I feel like I always have three or more irons in the fire and a million things to do...and there's never enough time to do it all. However, taking this vacation has really shown both of us that we can slow down and just take it as it comes.

While I'm sad that this trip has come to an end...I know that there will be many more trips in our future. As I watch the miles tick down on the screen, we are currently 1,085 miles from Seattle, I'm looking forward to getting into my own bed tonight and picking up our boys tomorrow. Life will go back to "normal" and we will both slip into our daily routines.

I snapped a few pictures while I was on the plane during and after take off. :)

My Dad told me that I must have a lot more time on my hands when I'm in Hawai'i because I do a blog post every day. I told him that while on vacation I *make* time for blogging. I do it mainly for myself as a way to record our trips in a way that is easily accessible. Plus, its great when people ask, "How was your trip?!" I can say...."Clearly you don't read my blog." :) Oh yea...I said it! LOL

Thanks for taking another trip with us, I know it wasn't as eventful as some of our other trips, but hey...sometimes we all need a nice relaxing stay on an island. :) I hope you enjoyed all the pictures, and I'd love to hear from you! You can always check out my Instagram pictures, my RHOSC Facebook page and my twitter feed!

Until next time...Keep Cooking!
Posted by The REAL Housewife of Snohomish County at 12:13 AM