It's a REAL Housewife Christmas!

Well boys and girls...in my house, Christmas has come and gone. I had not one, but two Christmas dinners (the same meal that I cooked twice) and today Michael and I celebrated our own Christmas since he works tomorrow. The joys of having a husband who works any day of the year :) But hey...it pays the bills! And then some!

Today was busy as usual! I got up and ran to the grocery store as well as to the mall to get a few other things for Mike's stocking. I made it to the mall before things got too crazy, thank god! Last night though we went to town to go line dancing with my girls and stopped at Petco on the way to town to get dog food and things for the boys' stockings. Okay, they got more than Mike and I combined! HA HA! Damn dogs! Good thing we love them...most days.

So today for lunch I decided to re purpose the leftover pork from Thursday's dinner with Mike's parents. I shredded the cooked pork and threw it in a hot skillet with some olive oil and some chili powder. Shredded pork tacos! YUMMY! :) I love re purposing food! And Mike seems to like it when I get in the kitchen and just whip something up. Tonight though I told Mike I'd make home made spaghetti for dinner. My dad and step mom bought me the kitchen aid pasta roller, fettuccine and spaghetti cutter set for Christmas! Mike loves fresh pasta! And it's quite simple to make actually. Well okay...the kneading the pasta dough for 15 minutes is a bit much...but hey, it's worth it in the end!

Tonight after dinner and a few glasses of Bacardi and coke we fed the boys and let them open their gifts in their stockings. Now we've always known that Cooper was a bit...well...*special*. But tonight I swear to God...he's taken the cake! Puck was ripping paper like it was his job. Cooper on the other hand just sat there and stared at it like he was waiting for something to happen. But once we ripped the paper off it he was excited to see the toy that was inside. And Puck couldn't get enough of the toys and the paper ripping!

We opened the package that my dad and step mom sent and opened the bag up they sent for Cooper and Puck. There were treats in there, as well as a kebab shaped squeaky toy. Now again...Cooper is *special* right? Well he FREAKED OUT! Cooper is afraid of most things, the hair brush, the hair dryer, a can of coke, the sound it makes when you blow into a bottle...get the picture? Well we've never seen him this freaked out. We had to put the toy away, and for an hour and a half he wouldn't even act normal. His ears were back, he was staring at the door or the fireplace and wouldn't chew on his toys. We aren't sure what his deal is. He is a shelter dog so we think he may have been beaten before, but we aren't sure how the squeaky toy plays into it. We felt really bad because we've never seen him this terrified. But alas, he's all better now and is tormenting us and Puck again. 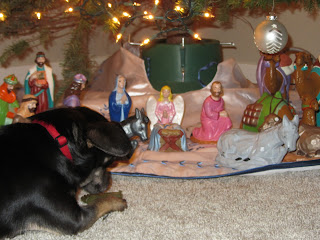 After the dogs had their turn, Mike and I exchanged stockings. Mike bought me some things for the kitchen, (all gifts that also benefit him LOLOL) and some beef jerky as well as my favorite gift...Just Dance 3 for the Wii! And I bought him a pair of scrubs that I did an iron on that had our last names with LLC after it, since according to the state we are a corporation and the date we were "founded" (day we met) and the day we were "incorporated" (day we registered as domestic partners). He loved them! Last year for Christmas I made him a pair that say "Property of Brian" on the butt pocket! LOL :) He wears them to work when he works nights. Hey...I had to stake my claim, we weren't married yet and I needed people to know that I would cut them! I also bought him a funny pair of underwear ;-) as well as a HUGE wine glass. I also had to buy myself one so we could be really classy when we drink wine! :)

After opening our gifts we decided to have a bit of a dance off. Well I whooped his butt, let me tell you! But after that he was on a lucky winning streak! He was like, I guess I'm just a genius when it comes to dancing. I smiled and said, "Take the dogs out and lets see the 'dance' you do outside with them." That shut him up! It's always a production when he takes the dogs out to go potty, Cooper is being a moron running all over the place, and Puck is...well being Puck. Mike is wrapped in the leashes, it's just a spectacle, one that makes me chuckle.
Posted by The REAL Housewife of Snohomish County at 10:03 PM