So, I need to get something off my chest. I can't believe that no one wants to join me on this cleanse! Does it scare you? Or is no one willing to commit before NYE has come and gone? :) Well I hope that some of you decided to take me up on this challenge, it makes it fun when you have people to go through something with you. But alas, I will do it on my own, as I have a few times before. Poor Michael will have to deal with a grumpy housewife!

So the last few nights have been fun culinary adventures for me! Two nights ago I decided to use the rest of the ricotta mixture in small ravioli. So I made some new pasta dough (Anne Burrell's recipe) and then used the cute little ravioli punch that Michael bought for me for Christmas. I'm not going to lie, I actually enjoy making pasta so much! The only thing that is a bit tough is kneading the pasta dough for 15 minutes. It's a bit tiring! But it's worth it at the end when you have yummy pasta, and in this case it's filled with cheese! Woot! So I took some pictures during the process of making pasta. Enjoy!

Okay, so that's how you make the dough! Not too bad, is it? ;-) So the next part is the easy part. Well it's easy if you have a pasta roller attachment for the Kitchen Aid mixer. Again, this is one of the BEST gifts I've gotten and I've used it over 10 times since I bought it. Since I made ravioli, I only needed to use the roller attachment. You start at "1" and then work your way up to "4" or "5".

After the pasta sheets are rolled out I lay them on top of each other (I rolled out 1/2 of the pasta dough...two quarters) and then cut them into manageable sizes to work with. 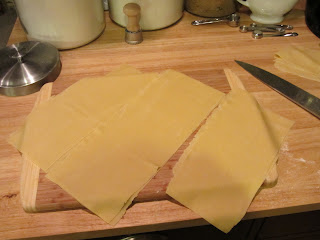 The easiest way to fill ravioli is to use a ziploc baggie as a piping bag. So you fill the bag and snip off the end of it with scissors.


Now they are ready to cook! Fresh pasta doesn't take as long to cook like dried does. So get a big pot of boiling water and season it with salt. Anne Burrell always says to "make it salty like the ocean!" Always use Kosher Salt, it's better for cooking. Then I always add some olive oil to the water to make sure they don't stick. Boil the ravioli for about 3 minutes (if you have a lot of ravioli do it in batches). Then pull it out to drain and add whatever sauce you like. For this ravioli I made a quick butter sauce. I took 1/2 stick of butter and melted it. I added some turkey stock (you can use any stock, I just had turkey stock open in the fridge) and some sage. Bring this to a boil and then simmer. Add the ravioli to it and cook in the butter sauce for about three more minutes. YUMMY! Serve with a some of the butter sauce drizzled over it.

Easy as pie! Right? Well let's be honest, cooking can be a bit intimidating. Mike told me that I make pasta making look easy. But it wasn't always that way. I used to roll pasta out by hand and that was a big ordeal. There are gadgets on the market to make things easier, so I suggest that you invest in them! :) Cooking can be so much fun, and kneading pasta dough is a GREAT way to get out some of your pent up frustrations! (I will probably start making pasta daily now lol).

Last night I made Anne Burrell's "Beef Bourgignon, it was 10 times easier to make than Julia Childs' and I think it even tasted better! :) My sister, Alyssa, came over and spent the day with me. She wasn't going to stay for dinner until she came into the kitchen and smelled the beef as it was browning! She decided to stay after that. Like Anne Burrell always says, "BROWN FOOD TASTES GOOD!" So yea, LOVE this recipe! Super yummy and super sinchy!

Well, there you have it...pasta! Woo hoo! Gonna go out and get everything to make ravioli tonight??? Do it! Then email me and tell me how it turned out! Hopefully you enjoyed this impromptu tutorial! Oh yea, and will someone join me on this cleanse? Peace out, y'all!
Posted by The REAL Housewife of Snohomish County at 8:31 AM