I've found myself running around like a chicken with it's head cut off the last few days. Why, you ask? Well because, we leave this weekend for an Alaskan cruise and there are a million things that need to be done...and it's clearly the job of a housewife to do them all.
For instance on Tuesday I had to take my mother to the airport, which is over an hour drive without traffic, and had her there by 8:40 AM, drove home, took care of the dogs, drove to Everett so we could go have some forms notarized at the bank, had lunch with Mike, went to the mall bought two pair of shorts, went to the Police Station and got Puck's city license, signed up for/opened a safety deposit box, had three house keys made (btw...Alyssa...one is for you), went to the grocery store, canned 12 jars of Kiwi jam (we had a ton of kiwi lying around...oy) and then made pea-lafels for dinner. And mind you starting with lunch with Mike, that was all after 1 PM and we ate dinner at 6. A day in my life can sometimes be hectic...but I went to bed feeling good about everything I've accomplished.

Now back to today...I'm trying to finish a few things up around the house before we leave, mainly four loads of laundry, pruning the house plants and cleaning the bathrooms. And we have a boatload of heirloom tomatoes from our three plants as well as the CSA delivery yesterday. So it looks like I'll be making Pappa al Pomodoro! This recipe is delicious! I've made it several times, but never with fresh summer tomatoes, so this should be great!! I also have two steaks defrosting to grill along with some summer squash...dinner should be yummy! 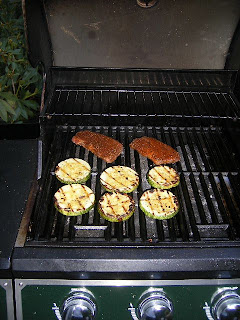 Well I suppose I should get in gear, I have four hours left until Mike gets home, and I still need to run to QFC to get some things for dinner...let's hope the dogs stay passed out on their bed this entire time!

**as a side note...I will continuously update posts with pictures if I'm making a meal :) **
Posted by The REAL Housewife of Snohomish County at 2:30 PM